Church Thanks San Diego Padres for Their Community Service 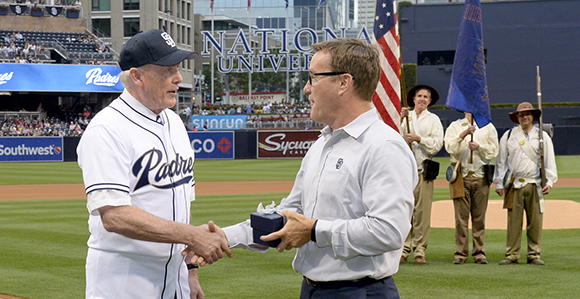 Elder Richard J. Maynes presents a crystal baseball to Tom Seidler, owner of the San Diego Padres, to thank the team for the service it performed using the Church’s JustServe.org website.

“It’s wonderful to see people of many beliefs and backgrounds coming together to lift those who can use a hand and to make their community a better place to live.” —Sister Sidney Price

After Elder Richard J. Maynes of the Presidency of the Seventy threw out the first pitch on Mormon Night at the San Diego Padres game on June 27, he presented to Tom Seidler, owner of the Padres, a crystal baseball to honor the community service the baseball team has done.

A few months ago the San Diego Padres started using the Church-sponsored website JustServe.org to find projects to get involved in. JustServe is a community service initiative and website provided as a resource by the Church. The baseball team decided to partner with JustServe after a meeting with Church public affairs representatives Dayle Tedrow and Rebecca Bennion. 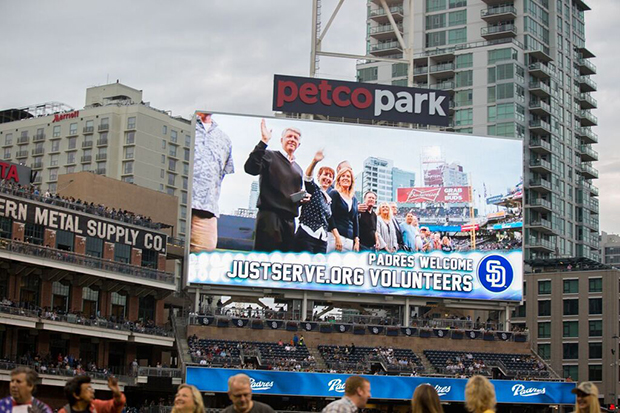 The purpose of JustServe is to connect people seeking volunteering opportunities with the needs for volunteers of community, faith-based, nonprofit, and governmental organizations whose mission is to care for those in need and to improve community life.

It was first piloted in the California San Jose Mission in 2012 and has since expanded to other metropolitan areas such as Denver, Phoenix, Dallas, and many others. More than 30 cities, as well as organizations such as Catholic Charities, Jewish Family Services, Red Cross, Habitat for Humanity, regional food banks, and many others—including the San Diego Padres—have endorsed the website.

So far about 90,000 volunteers, both Church members and people of other faiths, have signed up and over 10,000 projects have been posted. Where approved, full-time missionaries have also used it as an additional resource to facilitate their weekly community service. Recently the Church released an iOS and Android JustServe app for mobile users.

Elder William Price and Sister Sidney Price were called to assist Church leaders in the launching of JustServe and have watched it grow over the past few years. “It’s exhilarating to be part of this and to see this tool make a real difference,” said Elder Price.

“Elder Price and I have signed up and participated in many projects. It’s wonderful to see people of many beliefs and backgrounds coming together to lift those who can use a hand and to make their community a better place to live,” Sister Price added.

“JustServe is not a new Church program with quotas to serve,” Elder Maynes said. “It’s a tool designed to make finding local volunteer service opportunities much easier. Launching it in a few locations has allowed us to incorporate valuable and productive feedback and continuously improve the user experience. It is currently being rolled out nationally, but if you log on and can’t find any service opportunities in your area, have patience, it is coming your way soon. You will be notified by your local Church leaders.”

Abby Jennings contributed to this report.