Church Supplies More than $1 Million in Aid to Jordanian Charity 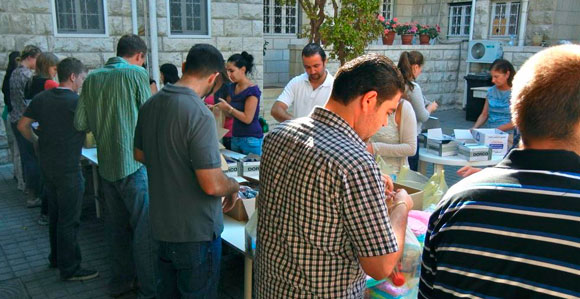 Since it first began supplying hygiene kits to residents of transitional camps near the Syrian-Jordanian border in May, LDS Charities has continued to work with others to respond to the Syrian refugee crisis. Here, Latter-day Saints are joined by members of the Greek Orthodox and Latin Catholic churches to assemble hygiene kits.

“The members are happy and proud to be able to help and assist in the relief efforts. … It creates a bond of brotherhood; it enlarges the vision of the members; it develops the feelings of love and hope. Humanitarian relief aid blesses the lives of those who give as much as those who receive.” —Karim Assouad, Amman Jordan District President

As tens of thousands of Syrian refugees flee their war-torn country and seek refuge in Jordan, the Church has answered a Jordanian charity’s call for additional assistance—providing more than $1 million in humanitarian aid and supplies with more en route or planned for the near future.

Working with the Jordan Hashemite Charity Organization, Latter-day Saint Charities has focused relief efforts largely on the needs of women and children, including infant formula, diapers, hygiene supplies, and school kits. The large majority of these supplies have been purchased locally in Jordan.

In addition, with the approach of the winter months, six containers of blankets, coats, and boots have been shipped to the country.

Elder Bruce D. Porter, a member of the Seventy who has responsibilities for the Church’s Middle East/Africa North Area, was recently in Amman and met with the prime minister, several cabinet ministers, and other Jordanian government officials. “They were all deeply moved by the willingness of the Church to assist in this effort,” he said.

Elder Porter emphasized that the Syrian civil war is an enormously complex and violent conflict.

“It has divided almost the whole Middle East in terms of which side they favor,” he explained. “But Jordan is a very peaceful country; the people are peaceful. They are trying very hard to simply help the refugees without any political agenda. That is exactly what the Church is doing. We are just trying to help people who are suffering.”

“We’re working with local and international relief organizations to evaluate needs and determine where our resources can do the greatest good,” said Sharon Eubank, director of LDS Charities. “We are pleased that we can help when there are many in need of assistance.”

Much of that aid is possible because LDS Charities received official registration in Jordan last year. In addition, Latter-day Saint Charities recently received recognition by the United Nations as a nongovernmental organization. “These recognitions were vital to helping us be a player in the relief effort,” said Elder Porter.

Sister Eubank said as the civil war unfolded in Syria, it became more difficult for people to stay there. As refugees moved across the border, they were absorbed into cities and towns, until they began to strain the country’s infrastructure.

In May, the Jordanian government started setting up the refugee camps. LDS Charities stepped in also, supplying hygiene kits to 2,500 residents of transitional camps near the Syrian-Jordanian border. Since that time, LDS Charities has continued to work with the council of relief organizations responding to the Syrian refugee crisis.

“LDS Charities has been a valued and trusted partner in assisting us to meet the needs of those coming in to Jordan seeking relief,” said Ayman R. Al-Mufleh, secretary general of the Hashemite Charity Organization.

“This is a strong and important partnership, and we are grateful for it.”

Another benefit is local members who have teamed with other religious groups, including members of the Greek Orthodox and Latin Catholic churches, to assemble supplies.

President Karim Assouad of the Church’s Amman Jordan District said this is not the first time local members in Jordan have been able to assist those in need.

“The members are happy and proud to be able to help and assist in the relief efforts,” he said. “I know they are grateful and thankful.”

He said it is very important to involve the local members in the Church’s relief efforts. “It creates a bond of brotherhood; it enlarges the vision of the members; it develops the feelings of love and hope. Humanitarian relief aid blesses the lives of those who give as much as those who receive.”

Lynn Samsel, director of Church Emergency Response, said the Syrian refugees in Jordan and other countries have literally had to flee their homes with the clothes on their backs. He noted that Church aid for the refugees is also being sent to other areas of the Middle East.

Sister Anderson said much of the aid focuses on “filling gaps” not being met by other humanitarian organizations.

For example, in Jordan the Church sent 40 truckloads of gravel to help control the blowing sand at a refugee camp located on the desert floor. The gravel also allows water from sudden storms to filter away from the tents.

She wanted members to know that Latter-day Saint donations are getting to where they need to be. “We personally oversee the distribution at the camp. … We see that the mother gets the diapers for her child.”

Sister Youngberg called the work in the country a wonderful thing that is extending “good will and love to people who need help.”

While the Church is reaching out to Syrian refugees who need assistance, the organization has not forgotten about the Jordanian poor who need help and assistance in a country where unemployment is above 30 percent, said Elder Youngberg. Of the six containers en route to Jordan, one is earmarked for the poor in Jordan, he said.

Sister Anderson said those receiving the aid are grateful.

She recalled meeting a Syrian woman in a refugee camp.

“She was bone thin; they have literally what they can carry. She noticed the logo on my blouse and looked at a box of supplies that had the same logo. She started to cry. It didn’t matter that we didn’t have words. It was very clear what she was saying. She hugged me and she kissed me and she was extremely grateful.”