Church Stands as a Beacon in Fiji Dancers perform a fan dance during a traditional welcome ceremony for President Henry B. Eyring of the First Presidency and Elder Quentin L. Cook of Quorum of the Twelve Apostles on Friday, February 19, 2016.

“This temple has been a light to the nation. … We started to see the blessing to the land. It is a significant sign that God loves Fiji and all its people.” —Taniela B. Wakolo, former stake president in Fiji

Standing in front of an old building where pioneering Latter-day Saints in Fiji once met, Alipate Tagidugu speaks about the rich traditions of his country and the blessings the Church has brought to the Pacific island nation.

Then he looks up the hill to a beautiful new Church building, located near Davetalevu Village.

The chapel, surrounded by lush green forest, reflects the sacrifice of Brother Tagidugu and others who worked to build up the Church in Fiji.

A pioneer member in Fiji, Brother Tagidugu is a former bishop and stake president in the Nausori Fiji Stake. He says he always knew there would be enough members to have a meetinghouse in Davetalevu, near Korovou. The Church has grown because of the example of the members, he explained.

Today the building is one of 38 LDS meetinghouses in Fiji, a country that is home to almost 19,000 Latter-day Saints, a Church college and primary school, and the Suva Fiji Temple.

Missionaries arrived in the Pacific island nation in September 1954. Four months later, President David O. McKay visited the country, worshipped with the 28 members there, and identified a site for a future chapel in Suva.

On May 4, 1958, President McKay returned to Fiji to dedicate the new chapel—the first in Fiji.

The Fiji Mission (later renamed the Fiji Suva Mission) was created on July 23, 1971. President Spencer W. Kimball visited the country in 1976. Later that year, the Church’s Fiji Technical College began holding classes. The first copies of the Book of Mormon in Fijian arrived on October 29, 1980, and the Suva Fiji Stake was organized on June 12, 1983.

In 1997, the Church reached a major milestone when the 100th stake in the Pacific, the Suva Fiji North Stake, was organized. And on October 15, 1997, President Gordon B. Hinckley visited Fiji and spoke to 10,000 people in the National Stadium in Suva.

Then three years later—at a time of political unrest when the military had declared martial law—President Hinckley returned to Suva on June 18, 2000, and dedicated the Suva Fiji Temple.

Yet, in the dedicatory prayer of the temple, President Hinckley promised local members peace and prophesied Church growth on the Pacific island nation.

“We pray, dear Father, that these beautiful islands may be blessed with peace, that there shall be no abridgement of the great freedom of worship afforded by the government of this land,” he prayed. “May Thy Saints be recognized as good citizens and may Thy work grow and flourish in this favored part of Thy vineyard.”

Taniela B. Wakolo, a former stake president in Fiji, attended the dedication. Everyone in Fiji has felt the influence of the temple in the almost 16 years since that day, he said.

“This temple has been a light to the nation. … We started to see the blessing to the land” immediately following the dedication, he said. “It is a significant sign that God loves Fiji and all its people.”

Elizabeth Sikivou recalled, “As a child I remember seeing the Tongan Saints coming through Fiji to go to the New Zealand Temple, and the journeys of Fijian members to temples in Hawaii and New Zealand, and then to Tonga.”

After its dedication, the Suva Fiji Temple became “our little sanctuary from the rest of the world,” said Sister Sikivou.

Venina Qoroya, the Church’s finance manager in Fiji, was born into the Church. Her dad was a bishop in the country when she was young.

When political turmoil hit Fiji, public transportation halted. Still her family, who lived a few hours by foot from the meetinghouse, walked the dirt roads to the chapel. Her parents wanted their children to learn it was important to “make the effort to renew our covenants each Sunday.” During rainy season, the family would clean off the mud and change their clothes before Sunday services.

“Knowing we have the gospel and especially the temple makes everything clearer,” she said.

The temple has been a blessing not just to Latter-day Saints in Fiji, but also to the entire country, said Vito W. Qaqa, president of the Suva Fiji North Stake. Mariners who enter the harbor in Fiji often look to the Suva Fiji Temple as a lighthouse, he said.

“We are so blessed in Fiji,” he said. “Now we have a Church school and a temple. We have everything we need. The Lord is preparing Fiji for bigger things.”

President Qaqa, a former rugby player in Fiji, joined the Church in 1985. At the time he and his wife met the missionaries, they had two small children “that were going to be given to someone else.”

“Life was not working for us,” he recalled. But the missionaries’ simple message resonated with them: “We can be better.” Soon “a change started to happen.” Their family was saved.

“We are here now because of the gospel,” he said.

Panapasa Tilley’s parents learned of the Church when, on a dusty hot day in the 1960s, his mother offered the missionaries a drink of water.

Brother Tilley was serving as a bishop in 2000 when President Hinckley flew to Fiji to dedicate the Suva Fiji Temple. After the dedication everything changed, he said.

“We felt something had happened. Now we had a Lord’s house dedicated.”

Brother Tilley often travels by boat for his work as a Church employee. When returning to Suva at night he looks to the temple. “It really stands out above all other lights,” he said. “It is there. It is our connection to heaven.”

Brother Tagidugu said members in Davetalevu Village also look to their chapel—which, like the temple, can be seen from the harbor—as a beacon and a refuge.

Hours after Cyclone Winston swept across Fiji in February 2016, Brother Tagidugu, then president of the Nausori Fiji Stake, gathered with families from Davetalevu Village who had sought temporary shelter in the meetinghouse. “Right now we have to work together as a team,” he told them.

Brother Tagidugu, who accomplished most of his Church work on foot without a car, said he was working to help strengthen the members—who will be the next Church leaders in the country. “They will stand on their feet and move the work of the Lord forward,” he said. Missionaries from the Fiji Suva Mission, Elder Cullen Carlson of the Republic of Palau and Elder Zachary Harris of Beaver, Utah, walk along the streets of Lami Town, Fiji. Photo by Sarah Jane Weaver. The Suva Fiji Temple, dedicated on June 18, 2000, by President Gordon B. Hinckley, was rededicated February 18, 2016, by President Henry B. Eyring. Photo by Sarah Jane Weaver. Harbor View from Suva, Fiji, where local Latter-day Saint leaders say the Church will continue to grow because of the example of the members. Photo by Sarah Jane Weaver. Sulueti C Bale Kama, a Church employee in Fiji, stands on the campus of the Church College of Fiji. Photo by Sarah Jane Weaver. 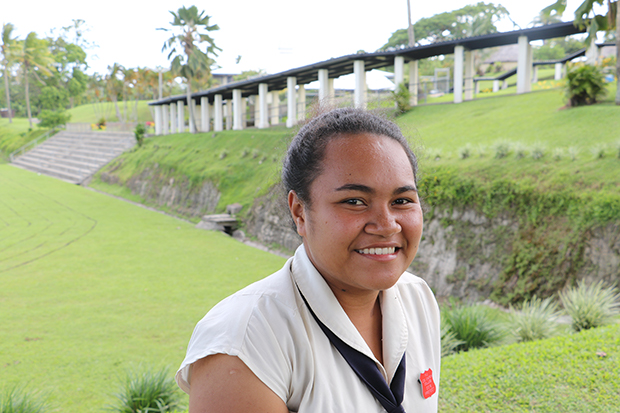 Takuao Maluga is a student at the Church College of Fiji. Photo by Sarah Jane Weaver. 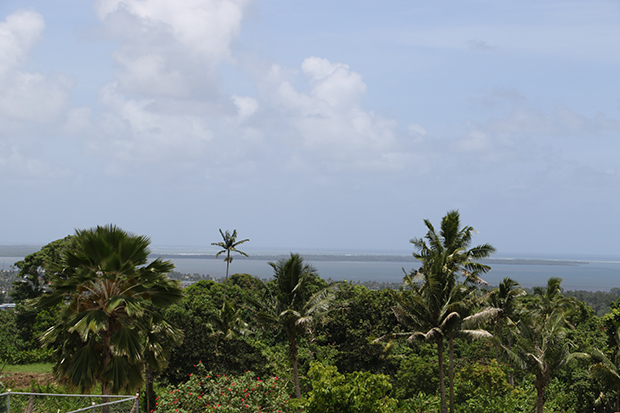 The lush landscape highlights the Pacific island nation of Fiji, where local Latter-day Saint leaders say the Church will continue to grow because of the example of the members. Photo by Sarah Jane Weaver. Students play games on the campus of the Church College of Fiji. In addition to the college, the Church has 38 meetinghouses and a temple in Fiji. Photo by Sarah Jane Weaver. 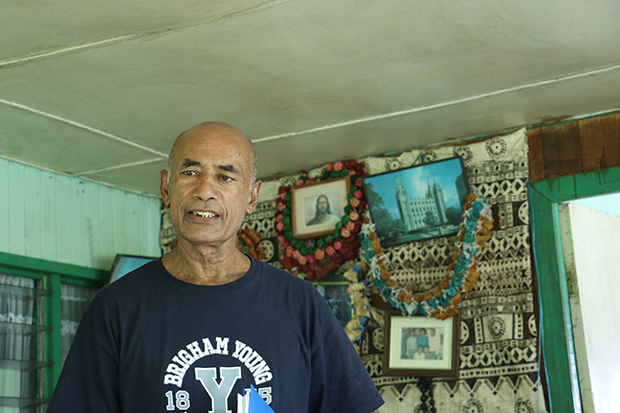