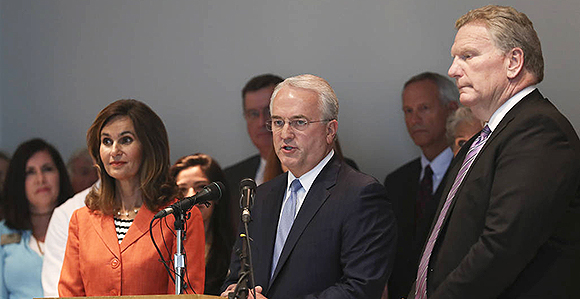 “We are in favor of appropriate use of medicinal marijuana, and it’s our view that by calling upon our legislature and local
leaders, we can quickly find an appropriate resolution.” —Elder Jack N. Gerard of the Seventy

In appropriate circumstances, the Church supports the use of medicinal marijuana when it is distributed correctly to people enduring chronic pain and suffering.

But the medical marijuana initiative that Utahns will vote on in November is not the right solution, it says.

The Proposition 2 initiative “goes far beyond what we consider the appropriate use of medical cannabis,” said Elder Craig C. Christensen, a General Authority Seventy and President of the Church’s Utah Area.

Elder Christensen, along with fellow General Authority Seventy Elder Jack N. Gerard and Sister Lisa L. Harkness, First Counselor in the Primary General Presidency, met with the Church News on September 19 to discuss the Church’s opposition to the ballot initiative.

All three of the Church leaders spoke of their empathy and compassion for people, including many children, who suffer each day with chronic and debilitating pain. They have spent time with many of them. The parents and caregivers of those in need, they added, also deserve help.

The leadership of the Church is eager for pain-ridden patients to find relief as quickly as possible. When responsible controls are in place, medical marijuana is an acceptable option for those who need it most.

“Proposition 2 is not the answer,” said Elder Gerard. “We are in favor of appropriate use of medicinal marijuana, and it’s our view that by calling upon our legislature and local leaders, we can quickly find an appropriate resolution.”

Church leaders are in hopes the Utah Legislature will legalize safe and responsible medical marijuana use in a special session by the end of the year.

As a mother and a grandmother, Sister Harkness said she grieves for anyone who has to watch a child or loved one suffer. The Church is working to find responsible legislation that would allow patients to have legal access to appropriate dosages of cannabis under the direction of their doctors.

The Church is not alone in its rejection of Proposition 2. It is part of a broad coalition of medical professionals, educators, law enforcement officials, and fellow religious leaders who are united in their opposition of the initiative.

“We are one voice in the chorus,” said Elder Gerard.

Elder Christensen said the medical marijuana initiative that will soon be in front of Utah voters does not do enough to protect vulnerable members of the community, including children and teens.

“We believe this proposition loses sight of our real purpose, which is to relive pain and suffering, and if passed, could become a slippery slope to unintended uses of marijuana,” he said.

Elder Gerard said states with laissez-faire marijuana policies, such as Colorado, have witnessed increases in teen recreational use, auto fatalities, and other adverse consequences.

The Church’s opposition to Proposition 2 should not be interpreted as an effort to simply table the medical marijuana issue. Instead, it is prompted by a “great urgency” to care for those in dire need of care.

“We joined this coalition so we can come to a Utah solution that works,” said Sister Harkness.

Additional information about the Church’s opposition to Proposition 2—and its combined efforts with others in the community to find a better solution—can be found at MormonNewsroom.org.