Church Responds to Disasters in Chile 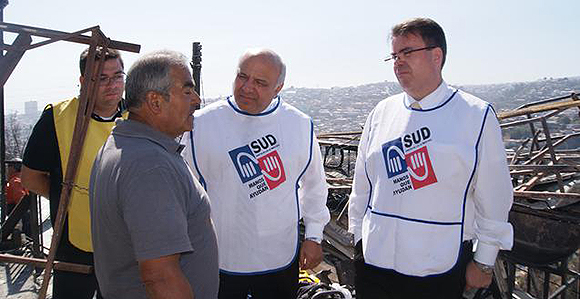 An April 12 wildfire in the coastal city of Valpariso in central Chile damaged or destroyed the homes of 28 Latter-day Saint families. No members or missionaries were harmed in the disaster.

The wildfire—which was fanned by hot, dry winds—consumed entire neighborhoods in the hills of Valpariso, destroying more than 2,500 homes and displacing more than 11,000 residents, according to the Church’s world disaster report. Fifteen people died in the blaze that Chilean President Michelle Bachelet called “a fire of proportions never seen before.”

More than 5,000 firefighters, police, and military personnel were battling the fire, which continued to burn at press time.

No Church buildings were affected by the blaze and at least one LDS meetinghouse was being used to shelter displaced families, according to the report. Other impacted member families were staying in the homes of relatives or fellow members.

Local priesthood and Relief Society leaders were also assisting members affected by the fire with food, shelter, clothing, cleaning supplies, and other provisions. Elder Jorge F. Zeballos, first counselor in the South America South Area Presidency, visited the impacted region to access the situation and offer comfort and support to the local members.

Meanwhile, Latter-day Saints living in northern Chile continue their recovery following an April 1, 8.2-magnitude earthquake. There were no injuries to members and missionaries and the limited humanitarian needs following the quake were being met through local fast offering funds. 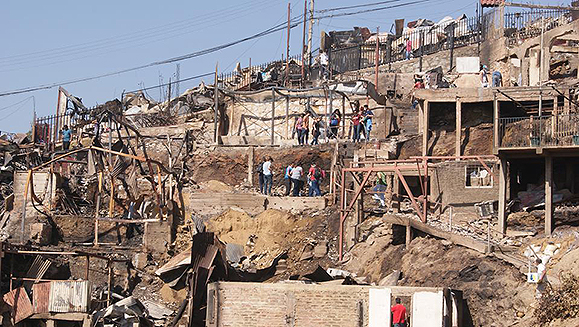 Part of the affected area that shows the level of destruction. Photo by Elder Juan Carlos Barros.