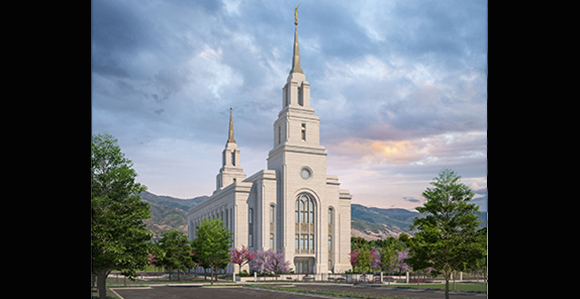 Although a date for the groundbreaking of the Layton Utah Temple has not yet been announced, The Church of Jesus Christ of Latter-day Saints released a rendering of the design for the temple’s exterior on Wednesday, October 8.

The site for the temple in Layton, Utah, has been designated at the corner of Oak Hills Drive and Rosewood Lane, with plans for a three-story edifice of more than 87,000 square feet.

The Church noted in a Newsroom release that “project leaders are preparing to file additional public documents relating to plans for the temple’s design” and that more details will be forthcoming following that process.

The Layton temple was first announced by President Russell M. Nelson during general conference in April 2018.

The release of the rendering comes just three days after President Nelson announced eight new temples, including two more for Utah, in Orem and Taylorsville, during the women’s session of the 189th Semiannual General Conference.

With 17 temples currently operating in Utah, additional temples have also been announced for Saratoga Springs, Tooele Valley, and Washington County.