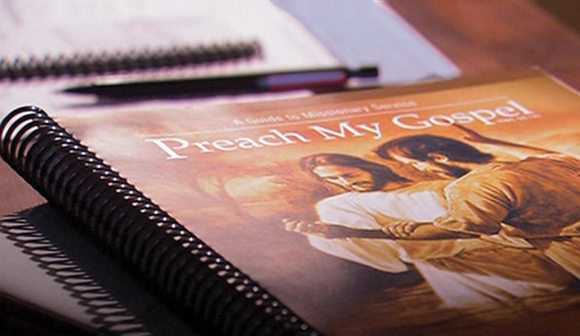 To assist missionaries and members in spreading the gospel, the Church has released an audio version and a pocket-sized or “mini” Preach My Gospel manual.

“Missionaries are not alone in benefiting from Preach My Gospel.” —Elder Richard G. Scott of the Quorum of the Twelve Apostles

Next year will mark the 10-year anniversary of the release of the Church’s missionary preparation and gospel teaching manual, Preach My Gospel.

To assist missionaries and members in their desire to master the principles found inside the manual, the Church has released two new media formats. The first is an audio version, and the second is a pocket-sized or “mini” Preach My Gospel manual.

The audio version of Preach My Gospel is available in English on a set of 26 CDs for $26. It can also be downloaded for free at itunes.apple.com. It evolved based on requests from mission presidents for help with missionaries who had poor reading skills or who comprehended better by listening. When the audio version was available, mission presidents found they also enjoyed listening to the CDs as they traveled around their mission.

The mini print version of Preach My Gospel developed out of a need for something smaller to use and carry. However, some felt that the notes column in the smaller version would not be used because the pages were too small.

After studying how missionaries used the standard Preach My Gospel manual, it was discovered that they used a separate study journal for compiling teaching notes and impressions rather than the notes column.

Soon the mini print version was officially approved and printed. It was well received and is now available in Spanish and Portuguese. The cost is $4.

President Gordon B. Hinckley spoke about the need for a change in missionary teaching during the 2003 worldwide leadership training:

“For many years now we have had a standard set of missionary lessons. Great good has come of this. … But unfortunately this method, in all too many cases, has resulted in a memorized presentation, lacking in Spirit and in personal conviction. …

“[Missionaries] should master the concepts of the lessons. But they should … teach the concepts in their own words under the guiding influence of the Holy Spirit” (“Missionary Service,” First Worldwide Leadership Training Meeting, Jan.11, 2003, 19).

On October 15, 2004, mission presidents and missionaries were introduced to Preach My Gospel during a worldwide satellite broadcast. Every missionary throughout the world was given a copy in English.

In a 2011 interview with Sheri Dew, CEO of Deseret Book, Elder Quentin L. Cook of the Quorum of the Twelve Apostles commented on the success of Preach My Gospel. He said, “In the past there have been times when missionaries memorized discussions, and now they are learning the doctrine, doing their own outlines, and figuring out how to teach it. … I think what it has done for missionaries may be even more important than what it has done for the work, although the work has gone up significantly from about 230,000 baptisms a year to about 270,000.”

The new audio and mini print media formats of Preach My Gospel are widely available for members of the Church through store.ChurchofJesusChrist.org and Deseret Book.

Not only can these new resources benefit missionaries and prospective missionaries, they can also help individuals and families.

Elder Richard G. Scott of the Quorum of the Twelve said: “Missionaries are not alone in benefiting from Preach My Gospel:

“One mission president’s wife studied and pondered every word in Preach My Gospel, including every scriptural reference. She then did something she had lacked the courage to do—she invited a close relative to study and ponder the Book of Mormon. That individual accepted her invitation and has been greatly benefited.

“Another family uses Preach My Gospel to help prepare their children for missions. They reported: ‘Our 17-year-old was the first to get an assignment. As expected, he looked for the shortest segment in the book. His lesson, however, was a 20-minute heartfelt expression of the principles, complete with scriptures and testimony.’

“From a father preparing a son for missionary service: ‘Preach My Gospel has … given me perspective and clearer understanding of the purpose of life, my duties and responsibilities as a member of the Church, as a father, and as a husband. … It has also given me concrete tools to better pursue that journey’” (“The Power of Preach My Gospel,” Apr. 2005 general conference).

With the lowering of the age requirement by the Church for missionaries, the work rolls forth at an increased rate. Missionary work is a crucial part of the gospel.

President Thomas S. Monson has said: “We are a missionary-minded people. We have a divine mandate to proclaim the message of the Restoration. …

“… Our missionaries are not salesmen with wares to peddle; rather, they are servants of the Most High God, with testimonies to bear, truths to teach, and souls to save.

“Each missionary who goes forth in response to a sacred call becomes a servant of the Lord whose work this truly is” (“Missionary Memories,” Ensign, Nov. 1987, 42).