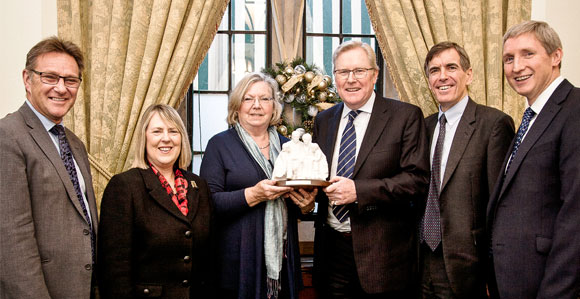 “The stability and future of our society depends on family values.  Such values need not only to be defended; in a large degree they need to be restored. The family is at the center of a civil and good society.” —Elder Clifford T. Herbertson, Area Seventy.

Sir Paul Coleridge, founder and chairman of the Marriage Foundation, received the Family Values Award from the Church at a celebratory event held at the United Kingdom’s Houses of Parliament on December 11.

Sir Paul was recognized for his commitment to promote and strengthen marriage and family life across the United Kingdom. He was commended “for his remarkable work in support of the family.”

On receiving the award, Sir Paul said that he was accepting it on behalf of the Marriage Foundation and felt it “extremely encouraging” to have outside support from other groups such as the Church.

“We need to support this great institution that’s falling down,” he said. “Our driving motivation is to do something because of the effect of family breakdown on children, whose lives are completely blighted by having to experience the horror of such breakdown.”

Describing cohabitation as “inherently an unstable social arrangement,” Sir Paul added that “our big aim is to increase the rate of marriage and to reduce the rate of divorce, promoting marriage is our first aim.”

The Church presents Family Values Awards annually to individuals in the public eye whose work and influence have a significant impact on family life within United Kingdom society.

Elder Clifford T. Herbertson, an Area Seventy, said, “The stability and future of our society depends on family values. Such values need not only to be defended; in a large degree they need to be restored. The family is at the center of a civil and good society.”

The Marriage Foundation recently drew attention to the statistic that family breakdowns cost an estimated £46 million each year to British taxpayers. The cost is due to the greater likelihood that separating parents require additional financial support—including welfare benefits and housing—as well as other support and interventions arising from health problems and domestic violence, in comparison with couple parents.

Sir Paul Coleridge was appointed a High Court judge in 2000 after 30 years as a family law specialist barrister.

Family Values Awards were first presented by the Church in the United Kingdom 12 years ago. Previous award recipients have comprised United Kingdom cabinet ministers, people of influence in the third sector, and senior faith leaders.