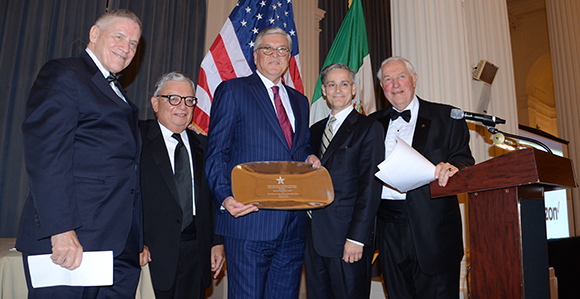 The Church recently received a Good Neighbor Award from the United States–Mexico Chamber of Commerce—the first religious organization to ever be singled out for this honor, according to LDS Church Public Affairs.

The award was presented May 24 at the Organization of American States headquarters in Washington, D.C. Troy Dow, a member of the LDS Public Affairs Committee in Washington, D.C., and Elder Gordon Smith, an Area Seventy and a former Oregon Senator, received the award on behalf of the Church and its 16 million members, according to former chairman of the U.S.–Mexico Chamber of Commerce Stuart Dye.

Dye presented the award with Duane Zobrist, a previous chairman emeritus of the chamber, and described the Church during the ceremony as “a premier resource for saving lives and rendering assistance to so many in such devastating circumstances.”

He continued that during the months following Hurricanes Maria, Irma, and Harvey, 11,000 to 16,000 Mormon Helping Hands volunteers were continuously deployed throughout the disaster areas, which he called “the single largest natural disaster coordinated response ever undertaken by The Church of Jesus Christ of Latter-day Saints.” and Helping Hands volunteers mucked out over 15,000 homes. In Mexico, over 150,000 homes were damaged in earthquakes, and the Church provided hundreds of tons of supplies and assisted in reconstructing over 350 homes.

Dye said the total man-hours volunteered by members of the Church in the United States, Puerto Rico, the Virgin Islands, and Mexico exceed 1 million.

“These thousands of LDS volunteers reached out to help not only members of their church but to neighbors and entire communities who were total strangers to clean up, salvage, and rebuild,” Dye said.

During the awards ceremony, Elder Smith said he thanked the Church’s humanitarian relief partners, which include the American Red Cross and Utah-based Globus Relief.

He also said he tried to answer the question of why the Church does humanitarian work.

“Because we are disciples of Jesus Christ, we endeavor to live and serve as He would have us live and serve,” he said. “This effort was simply a manifestation of our love of Christ and our commitment to His discipleship.”

Elder Smith said though the Church didn’t do the humanitarian work to receive recognition, the Good Neighbor Award puts the Church “on the map” among people who still value the eternal principles of kindness, compassion, and service; the award also “breaks down borders” during a time of increased controversy surrounding the United States–Mexico border.

“I think it breaks down borders in the sense that we recognize that our relationship to our Heavenly Father does not know borders,” he said. “It evidences that we understand our relationship one to another without regard to nationality or race or ethnicity or even religion and that we’re all God’s children. All deserve our compassion and our charity and our service when times of need strike.”

According to the organization’s website, the Good Neighbor Award “honors public and private sector leaders for their vision and commitment to mutually beneficial relations between Mexico and the United States.” The U.S.–Mexico relationship is important to hemispheric relations, and the chamber “salutes the individuals and corporations that have led the way toward greater cooperation and partnership between our nations.”

Other 2018 recipients of the Good Neighbor Awards include Ambassador Thomas A. Shannon, U.S. Department of State Undersecretary for Political Affairs; the Hon. Roberta S. Jacobson, U.S. Ambassador to Mexico; and the American Red Cross and Cruz Roja Mexicana for their united efforts during Hurricanes Harvey, Irma, and Maria and the Mexico earthquake.

The United States–Mexico Chamber of Commerce was established in 1973 as a nonprofit business association “to promote trade, investment, and joint ventures on both sides of the border.” They are now “the leading binational business organization working to build mutually beneficial trade and investment relationships in the Americas,” and their mission is to promote business between the United States and Mexico, according to their website. They operate through nine offices in Mexico and eight in the United States.