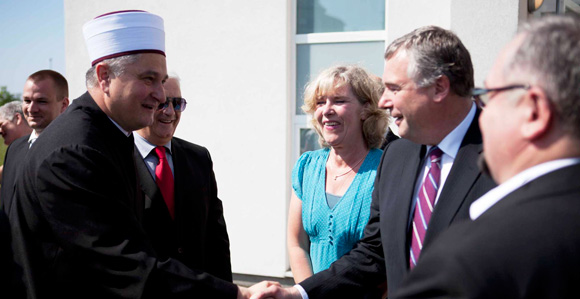 Elder Erich W. Kopischke of the Seventy greets dignitaries as part of the three-day celebration of the Church’s 40-year presence in Croatia.

These events, presided over by Elder Erich W. Kopischke of the Seventy, President of the Europe Area, also celebrated that all countries of the former Yugoslavia—and Europe—have proselyting missionaries and Church units.

This was the first time that members of the Church from each of the four countries of the Adriatic North Mission (Bosnia and Herzegovina, Croatia, Serbia, and Slovenia) had gathered together since the Balkan Wars in the 1990s.

The first events were held on June 1–2, at the Krešimir Ćosić Dvor (estate) on Ugljan Island, near Zadar, Croatia. The two days on the island included a special evening devotional; early-morning baptisms of new converts in the Adriatic; training for priesthood leaders, women, and youth; and a tour of historical Church sites in and around Zadar, where Krešimir Ćosić grew up and started the first Church activities in Yugoslavia.

The history of the Church in this land began with the baptism of Krešimir Ćosić in Utah in 1971. Krešimir, a young national sports hero in Yugoslavia, had gone to Brigham Young University to play basketball. He quickly returned to his beloved homeland to share the blessings of the gospel with his country. The parallel history of “Kreso” and the beginning of the Church was joyfully rehearsed and celebrated.

Many of the first members of the Church in these countries, along with early missionaries and members who were instrumental in the Church’s growth here, traveled to participate in the events. Participants included the family of Truman and Ann Madsen, who were represented by Sister Madsen, her daughter Mindy M. Davis, and Sister Madsen’s granddaughter Molly Davis.

Ann told of Kreso’s days at BYU and his conversion. Mišo and Ankica Ostarčevic, the first couple Kreso baptized and the first to be sealed in the temple, told of the early struggles of the fledgling Church in Zadar and other parts of Croatia. Ivan Valek, friend and longtime district president, added his memories and testimony. Doug Richards, teammate and early missionary with Kreso, and his wife, Kerry, described their experiences with Kreso at BYU and in Yugoslavia. Mila Ranovic, the first missionary to leave from Serbia, told her story and the story of the Church’s start in Serbia. Albin and Boža Lotrič (he was the first man from Slovenia to join the Church, and they were the first couple living in Slovenia to be sealed in the temple) filled in events related to their country. Johann Wondra, who had presided over the mission, and his wife, Ursula, told anecdotes from their time of service. During the devotional, all spoke of the history they had witnessed.

Elder Kopischke concluded by summarizing the great legacy of faith that exists in these countries and the marvelous future of the Church that awaits them.

The next morning, Swen R. Swensen, who presided over the mission in the mid-1990s, and his wife, Gretel, spoke at a baptismal service, as did Taca Mirijevski, one of the first members of the Church in Serbia.

After the two days on Ugljan Island and in Zadar, those who had gathered traveled to Zagreb, the capital of Croatia, where a Sunday commemorative conference was held with other members, investigators, and invited guests—including senior national and local government officials, religious leaders, and members of the media.

Elder Kopischke said that a personal relationship with God “is not just a philosophy. It is not just a tradition. It is real. And this personal belief has an impact on the way we act. You cannot say, ‘I believe in God’ and hate and not tolerate your neighbor. This is not possible. You cannot say, ‘I love God’ and [not be] tolerant to someone who has different beliefs. We are all children of our Heavenly Father.”

Elder Kopischke assured the invited guests, “We will join you in any coalition of goodwill to protect the values of families, marriage, freedom, and hard work.”

The Croatia district conference, which followed, was the crowning experience of the weekend.

Yugoslavia was dedicated by then-Elder Thomas S. Monson in 1985 for the preaching of the gospel. More recently, in September 2010, Elder Russell M. Nelson of the Quorum of the Twelve Apostles dedicated countries that comprised the former Yugoslavia.

Regarding the 40th-anniversary events, President Rowe said: “We gathered our active, less-active, and future members from the far corners of the mission. We invited them to a peaceful setting, where they could look beyond their daily surroundings and gain a true vision of who they are and what the Lord intends them to become. What transpired during these three days was an incredible, sacred outpouring of the Spirit upon those gathered from these nations.”