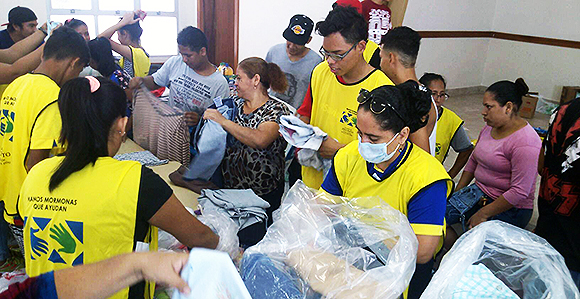 Mormon Helping Hands volunteers collect and sort clothing for victims of the earthquake in Ecuador.

Ten Latter-day Saints were counted among the hundreds killed in the earthquake that rocked the Ecuadorian coastline on Saturday, April 16. Thousands more were injured or left homeless by what is being called Ecuador's largest temblor in decades.

The Portoviejo Ecuador Stake was severely affected by the disaster. Five members of the stake died, including a branch president, his wife, and their daughter. Their names have not been released.

A dozen Mormon meetinghouses were also damaged during the magnitude-7.8 quake. As of Tuesday, it remained uncertain the degree of damage at the buildings or if they can be repaired.

The Church released a statement soon after the disaster.

“We are mindful of the destruction and loss of life caused by this earthquake and are praying for the people of Ecuador,” said Church spokeswoman Kristen Howey. “Because of the widespread devastation, it is difficult to determine how members and Church facilities have been affected. We are grateful to report that all our missionaries in the region have been contacted and are safe.”

Priesthood and welfare leaders from the Church's Lima-based South America Northwest Area are working with civil authorities in Ecuador to deliver relief to affected members and others. Members throughout the country were coming together in “Helping Hands” efforts to prepare food and aid packages.

Local leaders have called on members to demonstrate Christian unity by mourning alongside those who have lost loved ones and working together to rebuild damaged cities and lives.