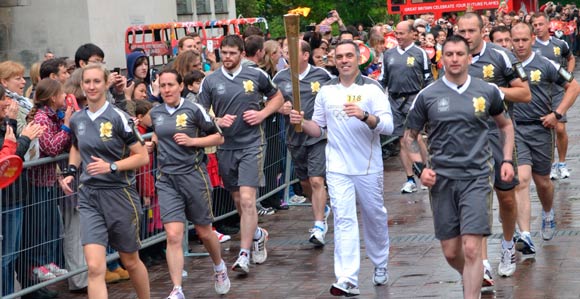 David Graydon, a member of the Sunderland England Stake, recently carried the Olympic torch in Newcastle upon Tyne. Brother Graydon was nominated for the honor by the young people he works with at Gateshead Youth Council. Photo by Anthony Graydon.

With the Olympic Torch Relay making its way around the United Kingdom before arriving at the Olympic Stadium in London on July 27, 2012, there is at least one person who will always remember when the torch came to Newcastle upon Tyne in northeastern England.

David Graydon of the Gateshead Ward, Sunderland England Stake, was nominated to be a torchbearer by the young people he works with at the Gateshead Youth Council. He was chosen for the difference he makes in the community helping young people get involved in activities in their area. David assists them with their youth work, their Duke of Edinburgh’s Award, and their personal development, and those who work with him say he is always ready to help. (The Duke of Edinburgh’s Award is a program that gives young people ages 14 to 24 opportunities to develop life and work skills and fulfill their potential.)

The Olympic flame is part of the tradition of the Olympic Games; prior to each Olympics, the flame leaves Greece for the host country and arrives in the stadium for the commencement of the games. This year some 8,000 people have taken part or will take part as torchbearers, carrying the flame on its 8,000-mile (12,875 kilometer), 70-day journey to the opening ceremony. All who carry it were, like David, nominated for their good works in the community or for an inspiring achievement.

Since May 19, thousands of people have been lining the streets of the relay towns throughout England, Northern Ireland, Scotland, and Wales to catch a glimpse of the famous flame.

David carried the torch on June 15—day 28 of the relay—in the streets of Newcastle upon Tyne, which is in the northeast of England. Crowds cheered him on, waving the Union Jack flag and lining the city center streets, which were closed for the procession.

“Being nominated to carry the Olympic torch by the young people I work with was a great honor,“ he said. ”I love my job, and seeing the young people grow and develop is the best reward. Learning that they value my input and feel strongly enough to fill in a nomination is really humbling.

“Carrying the Olympic torch was one of the best days of my life,“ he added.

The Olympic torch had been passed to David by the world-famous England footballer [soccer player] Jack Charlton, from Northumberland, who played in the winning World Cup England team of 1966 and whom many still consider a football legend.

David joined the Church when he was 17 years old in Dublin, Ireland, and served a full-time mission in the England Leeds Mission from 1990 to 1992. He has served in a range of Church callings from teaching Sunday School to serving as a member of the high council.

Since carrying the torch, David has spoken in schools and to Scout and community groups about the honor of bearing the torch.