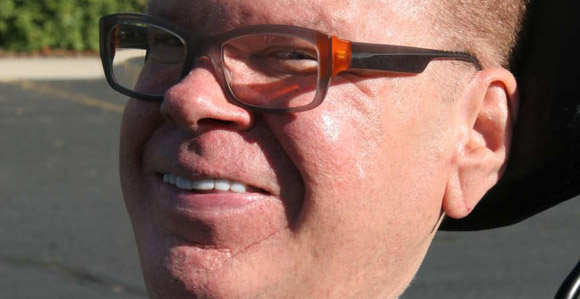 Stake or ward disability specialists like Steve Mikita support families and individuals with disabilities and serve as a resource for local leaders seeking to help all members enjoy the blessings of Church participation.

“It takes one charitable person to see that person [with a disability] and say, ‘Bring them hither.’” —Steve Mikita, a stake disability specialist

“It only takes one.”

That was the adage Steve Mikita’s mother used whenever he faced some sort of fear or doubt that he could succeed because of having been born with a neuromuscular disease.

“Remember,” she would say to her beloved son, “it only takes one.”

That “one” has come in many forms in Brother Mikita’s life. In his 57 years, there was the university dean, a roommate, friends, and, of course, members of his family—especially his mother. It always seemed after making it a matter of prayer, some “one” would come along to remove barriers or offer friendship.

Today, anyone familiar with Brother Mikita of the Hegessy Ward, Sandy Utah Granite Stake, knows how often he is that “one” for others. For 28 years, he has been an assistant Utah attorney general who often protects the rights of people with disabilities. He is a motivational speaker who has lifted the morale of members of the U.S. Army and the American Legion. He has appeared on 60 Minutes to offer an opposing view to physician-assisted suicide.

And now, as a stake disability specialist, he is taking his mother’s message of the “one” to members of the Church.

Born in Steubenville, Ohio, to William and Mildred Mikita, “Stevie,” as his family called him, showed signs of muscle weakness in infancy. By the time he was 18 months old, he was diagnosed with a neuromuscular disease. But he defied the odds. First told their son had Werdnig-Hoffman’s Disease, his parents were told he had weeks to live.

Four years later, although having severe muscle weakness, he was an active, happy child playing with his brother, Billy, and sisters, Carole and Judy. (His sister Carole Mikita is the religion specialist for KSL Television in Salt Lake City.) He was finally diagnosed with spinal muscular atrophy.

But even then, “I’m one of the oldest people that they know of with this disease living in the world. My parents always said I have special things to do in this life.”

He was 4 years old when his father showed him the April 1960 issue of Look magazine, featuring former U.S. President Franklin Delano Roosevelt in his wheelchair.

“You’re going to do great things,” the older Mikita said, “because FDR did great things in his wheelchair.”

Brother Mikita sees his calling as a disability specialist as a way for others with disabilities to discover what his own faith and that of his mother’s did for him. “I think what this calling is about is to identify those children and adults whose talents and skills and gifts that were given them from the Almighty can find expression.

He related how soon after being called as the stake disability specialist, he visited with one of the bishops. He entered the bishop’s office and said, “I understand you want to talk to me about a couple of members of your ward.”

In offering advice to other disability specialists, he spoke of the inspiration that came to him while offering support to a bishop, but especially after listening and asking the right questions.

“I’ve learned from my legal experience that I cannot help a client resolve a dispute unless I fully understand what the issue is.”

Recalling his mother’s adage that it takes “only one,” he spoke of 3 Nephi 17 when the Savior healed all those who were “afflicted in any manner.” Brother Mikita added, “It takes one charitable person to see that person [with a disability] and say, ‘Bring them hither.’ ”

For Sandy Utah Granite Stake President Dave Castleton, the “one” for his stake has been Brother Mikita. Of the service the latter has offered, President Castleton said: “Steve has done an amazing job as our stake disability specialist. He has met with all of our bishoprics and stake council members and taught them many valuable principles in working with those with disabilities. He has helped us all understand the importance of integration rather than segregation. He has also offered his services to the bishops and other leaders to help find ways to more fully integrate those with disabilities as well as assist those with disabilities grow spiritually, emotionally, and socially.”

Speaking in September to a combined priesthood/Relief Society meeting in the Granite Ward in his stake, to which the youth were invited, Brother Mikita quoted from John 5:2–4, where the angel “troubled the water” at the pool of Bethesda, Brother Mikita said: “The reason why I am here is to ask you to help me trouble the water. I cannot do it by myself. I cannot dip my hand without your help. …

“I pray that you realize that someone is waiting for you to be that angel, to come down and to trouble the water.”

—Some of the information for this article came from Brother Mikita’s book, I Sit All Amazed. (Deseret Book, 2011)