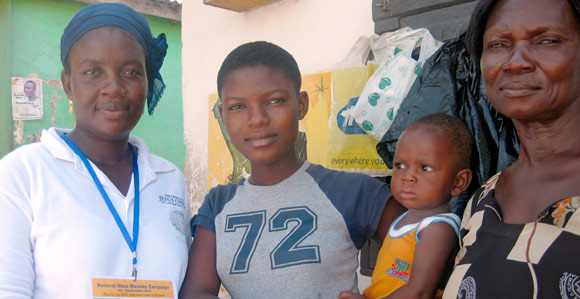 In May the Humanitarian Services Division of the Church announced that immunizations will join the ranks of the other major humanitarian initiatives—clean water, emergency response, food production, neonatal resuscitation training, vision care, and wheelchairs.

According to Fred Riley, manager of immunizations and special projects for LDS Humanitarian Services, this change means more emphasis on and more funding for the initiative.

Although Church leaders recognized the importance of immunizations more than 30 years ago (read a 1978 First Presidency letter, “Immunize Children, Leaders Urge”), only in the last decade has immunization been a focus of the Church’s Welfare Department.

Today health organizations with which the Church has partnered in the past are recognizing the unique ability the Church has to mobilize vast groups of volunteers in countries around the world. These volunteers help further the fight against disease and increase the long-term effects, eventually allowing countries to sustain their own immunization efforts.

The Church: A Valuable Player in the Effort to Immunize

The Church’s immunization efforts began in 2003, with a $3 million USD donation to a worldwide movement known as the Measles and Rubella Initiative, which involved several organizations, including the American Red Cross, the United Nations Foundation, and World Health Organization. The initiative provided measles vaccinations to children in 40 countries.

Immunizations are one of the most cost-effective health measures available, according to the United States Agency for International Development, which has said, “Investments in immunization yield a rate of return that is higher than nearly any other development intervention.”

Since 2003, the LDS Church has contributed more than US $16 million to the immunizations initiative, donating approximately US $1.5 million a year to help provide funding for immunization supplies such as vaccines and syringes.

This week, the Church donated $1.5 million USD to the Global Alliance for Vaccines and Immunizations (GAVI) to help make pneumococcal (pneumonia) and rotavirus (diarrhea) vaccines more widely available in five African countries. This donation represents the $1 million donation made this week, in addition to a $500,000 donation the Church made late in 2011. This contribution is the largest made by a religious organization in GAVI’s history and will be doubled as part of the GAVI Matching Fund by the Bill and Melinda Gates Foundation.

The success of such efforts, however, is evident in other numbers: Between 2001 and 2010, measles deaths decreased by 74 percent globally and by 85 percent in Africa. Approximately 4.3 million lives have been saved as a result of the international Measles and Rubella Initiative.

Now health organizations are shifting their focus to diarrhea and pneumonia, which together account for 28 percent of childhood deaths in developing countries.

The Church’s monetary donations have played a key role in combating disease, however, in the past few years, the Church’s ability to mobilize large numbers of volunteers quickly in countries around the world has become just as valuable.

Earlier this year, for example, thousands of LDS volunteers arranged to send 1.5 million text messages to Ghanaians, notifying them of an immunization drive sponsored by GAVI. The Church has also provided additional funds and volunteers for health education programs in several other GAVI-supported countries.

“The Church is becoming a facilitator,” Brother Riley explained. “We coordinate with the World Health Organization, UNICEF, the Global Alliance for Vaccines and Immunizations (GAVI), the United Nations Foundation, and others, and what we bring to the table is the ability to gather volunteers in more than 100 countries who don’t expect payment and who reliably show up.”

In nine years, approximately 60,000 Church volunteers have donated 766,000 hours to immunization campaigns in 35 countries, reaching more than 100 million children and youth on six continents. Another 25 Church-service missionary couples have offered support in various countries and campaigns, and Church buildings have served as immunization sites in the past.

Immunization: From Inception to Inoculation

Humanitarian Services, overseen by Welfare Services and the Presiding Bishopric of the Church, monitors immunization needs around the world then works with health organizations, local government, Church leaders, and members to fill those needs.

Brother Riley emphasized the importance of local leadership in forming relationships with health and government organizations within each country.

Part-time welfare missionaries spend four to six weeks at a time in various countries, working with local health ministries and others to educate and organize immunization efforts. They help supply banners, flyers, and other materials to help spread the word. Area Presidencies direct leaders on coordinating with local government, members, and citizens.

Due to their familiarity with social media and new technology, young adults are especially helpful when trying to mobilize local citizens to participate by volunteering, Brother Riley said.

Regardless of age or faith, volunteers use megaphones, mass text messages, flyers, television and radio ads, and many other methods to spread the word. In the more remote villages and towns, door-to-door canvassing works best. In Madagascar, a member wrote a musical jingle that has been translated and played on local radios in 30 languages.

In 2011 the Church partnered with GAVI, which seeks to save lives by increasing access to immunization in the world’s developing countries. Earlier that year, in preparation for World Pneumonia Day in November, the Church and GAVI launched a project in Kenya. More than 300 local members spent 1,800 hours distributing tens of thousands of flyers and posters offering information about immunizations and the availability of vaccines.

In many countries, a lack of education or funds (or both) limits the ability to provide an adequate number of vaccines to citizens.

The self-sustainability of governmental health ministries and routine vaccinations are priorities the Immunizations Initiative aims to improve. Countries with developing health infrastructures need training and education to be able to continue to offer immunization services.

To further these goals, the Immunizations Initiative partners with organizations that help countries provide a higher percentage of funds for their immunization campaigns each year. Meanwhile, members have grown through their participation in previous campaigns. So far this year, two countries have participated in campaigns without short-term missionaries’ help. Members have also learned to take the initiative to help with other needs in their community, such as a clean-up project for an NGO in Haiti and a no-smoking campaign in Sierra Leone.

“In addition to providing funding and service hours, we want to build a culture of volunteerism and self-reliance,” Brother Riley said. “That is the end goal—to help a country reach the point where it has the resources necessary to help its citizens successfully combat these diseases through immunization.”

Individuals can learn more about donating to the fund or volunteering in their own countries by visiting LDScharities.org, which will premiere in July of 2012. Donations may also be made via the “Humanitarian Aid” line on tithing slips.