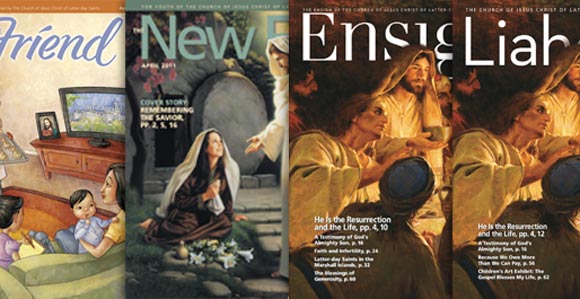 “Through the pages of the Church magazines, the words of the living prophets and Apostles can come into our homes on a regular basis to guide and inspire us and our families. We urge all members throughout the world to subscribe to and read the Church magazines.” —First Presidency letter, April 1, 1998

This year, the Friend, New Era, and Ensign each celebrate 40 years of publication. For magazines whose roots date back to the late 1800s, that’s not over the hill—it’s just the beginning!

In 1971, Church leaders took some of these existing publications and reorganized them into the magazines English-speaking Church members know today.

But while noticeably different in appearance and content from some of the first issues in the 1970s, the Friend, New Era, and Ensign are guided by the same prophetic inspiration today as then, and the purpose is the same: to serve Church members.

In 1902, Primary Association president Louie B. Felt and secretary May Anderson secured the means to print a year’s worth of the first edition of the Children’s Friend by using Sister Felt’s house as collateral. Sister Anderson and Sister Felt ironed used wrapping paper, collected string, wrapped the magazines individually, and addressed them by hand.

The magazine was a great success, and although the Children’s Friend was first printed for leaders and teachers, Sister Felt and Sister Anderson soon included stories and activities for children as well.

In 1971, the Children’s Friend became the Friend.

Over time, the new Improvement Era’s content increasingly focused on an older audience, so in 1967 a new section called “The Era of Youth” was introduced to reach out to a youth audience. The 1971 reorganization made this section the foundation of the modern youth magazine, the New Era.

Finally, the 1971 creation of the Ensign was a compilation of the Improvement Era, Instructor, and Relief Society Magazine.

In an audio recording included on a vinyl record in the January 1971 issue of the Ensign, President Joseph Fielding Smith (1838–1918) emphasized the need to strengthen individual families as well as the Church as a whole.

In 1970, all Church magazines were led by various Church auxiliaries. There was no correlation between the content of the magazines, and there was not a consistent message being published.

In 1971, the Church reorganized and combined these existing Church publications into the Friend, New Era, and Ensign to make up a family of correlated Church magazines, initiated and published under the direction of the First Presidency and the Quorum of the Twelve Apostles.

The Friend became, in the words of President Gordon B. Hinckley (1910–2008), then serving in the Quorum of the Twelve Apostles, “a better friend, for the children of the Church, and we hope for many others. With wonderful stories and fascinating art, it will open small and delightful windows and bring … understanding of eternal and marvelous gospel principles.”1

The Ensign was designed for adult members of the Church and included monthly First Presidency and Relief Society Messages and informative articles on a variety of gospel topics.

In the 40 years since the consolidation of the Church magazines, the design has changed significantly. But besides that, the changes have been small: the New Era’s audience narrowed from ages 12–26 to ages 12–18 in 1975, fiction was eliminated from the magazines, several sections came and went, and the Ensign began placing general conference addresses on the Church website three or for days after the close of conference, providing free, almost immediate access to conference addresses.

But as the Church growth worldwide began to accelerate during those same years, the need for a publication that accomplished the same goals but served members throughout the world became apparent.

Magazines for a Worldwide Church

In 1846, long before the first issue of the Young Woman’s Journal in 1890, Elder Dan Jones was publishing the first non-English Church magazines, Prophwyd Y Jubili, neu, Seren Y Saints (Prophet of the Jubilee, or, Star of the Saints), in Wales.

Between 1846 and 1967, the missions of the Church continued to publish mission periodicals for local members. While overseeing the European missions in 1966, President Howard W. Hunter, then of the Quorum of the Twelve Apostles, noticed the duplication of work in these separate publications, and, in some cases, a lack of consistent messages.

In 1967 the Church consolidated and correlated these area magazines into one publication, the International Magazines. It was published in nine languages, with more to follow.

“One of the reasons for that is that Liahona is a word that is uniquely LDS because it’s a Book of Mormon term,” said Jenifer Greenwood, assistant managing editor of the Liahona. “While the other titles were historical, they didn’t necessarily indicate that it was an LDS publication. And there’s so much nice symbolism with the magazine and the Liahona.”

Just a year later, yet another major shift occurred. Church leaders wanted members around the world to begin receiving the same message at the same time. In 2000, each magazine’s planning was completely separate. When an article from one of the English magazines was to be published in the Liahona as well, it had to be redesigned and revised.

The magazines’ staffs decided that the Liahona content—including material for children, youth, and adults—would be planned first. The best content, and the content most appropriate for a worldwide audience, would be based on monthly prophetic priorities.

“It was really turning our world and our process upside down, but it was the way to send a consistent message out to the entire Church,” Sister Greenwood said. “It was a way for the words of living prophets to go out worldwide.”

With the international growth of the Church and the overhaul of the Church magazines’ processes, it is apparent that although the magazines may have different histories, their future is very tied together.

“It’s a recognition for members everywhere that this really is a worldwide Church,” Sister Greenwood said. “It’s not a local church or an American church, but it’s the Lord’s Church, and it really does cover the globe. I think members in English-speaking parts of the world are strengthened knowing more of the experiences and struggles of members in other parts of the world.”

In a 1998 letter to Church members, the First Presidency stated, “Through the pages of the Church magazines, the words of the living prophets and Apostles can come into our homes on a regular basis to guide and inspire us and our families. We urge all members throughout the world to subscribe to and read the Church magazines.”2

History of the Church Magazines

July 1846 – Prophwyd y Jubili, neu, Seren y Saint (Prophet of the Jubilee, or, Star of the Saints) is first published in Wales.

1873 – Woman’s Exponent begins publication as a voice of LDS women that carries some Relief Society news.

1901 – The Deseret Sunday School Union purchases Juvenile Instructor, and it becomes a resource for all Sunday Schools.

1902 – The Primary Association begins publication of the Children’s Friend, a monthly bulletin.

1910 – Utah Genealogical and Historical Magazine begins publication and teaches members how to do genealogy and submit names for temple work.

Also in this year, the Juvenile Instructor becomes Instructor, as it prints as much adult instruction as instruction for children.

1960 – Improvement Era, having become more institutional and adult over the years, begins a new section, “The Era of Youth,” to reach out to a younger audience.

1966 – Relief Society Magazine becomes the first Church headquarters publication to publish in a language other than English (Spanish).

1967 – The Church consolidates non-English mission periodicals, now numbering 16. The individual periodicals retain their respective names, but their editorial content is standardized under the category “International Magazine.” The first issue appears in nine languages.

1971 – The Church reorganizes all the magazines previously directed by Church auxiliaries into the Ensign of The Church of Jesus Christ of Latter-day Saints (comprising the former Improvement Era, Instructor, and Relief Society Magazine), the New Era (from the “Era of Youth” section of the Improvement Era), and the Friend (from the Children’s Friend), all directly connected to and directed by the Church’s priesthood leadership of the First Presidency and the Quorum of the Twelve Apostles.

1982 – The unified “International Magazine” begins sending out translated copies of the monthly First Presidency Message to developing areas of the Church.

1991 – The unified “International Magazine” begins sending out translated copies of the monthly Visiting Teaching Message to developing areas of the Church.

1995 – All Church international magazines begin changing their names to Liahona. The process is complete by 2000.

1997 – The Ensign begins placing general conference addresses on the Church website a few days after conference, allowing fast, free access to conference messages throughout the world.

2000 – The Liahona publishes monthly magazines in more than 50 languages and the First Presidency Message and Visiting Teaching Message in more than 60.

Also in 2000, the Church places all Church magazine articles published from 1971 to the present online.