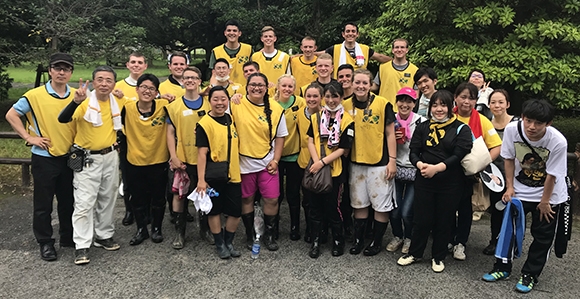 Members and missionaries worked together in several Church-sponsored Helping Hands projects, offering aid to folks impacted by flooding and heavy rains in Japan.

Heavy rains, flooding, mudslides, and even a typhoon have cut across sections of Japan, Taiwan, and eastern China, combining for a destructive cocktail of weather events.

All missionaries serving across affected regions are safe and accounted for, and there are no reports of injuries to members.

Japan has been hit especially hard. In recent weeks the island nation has endured its worst flooding and landslides in decades following torrential rainfall. More than 200 people have died in what has become the country’s deadliest disaster since the earthquake and tsunami of 2011. 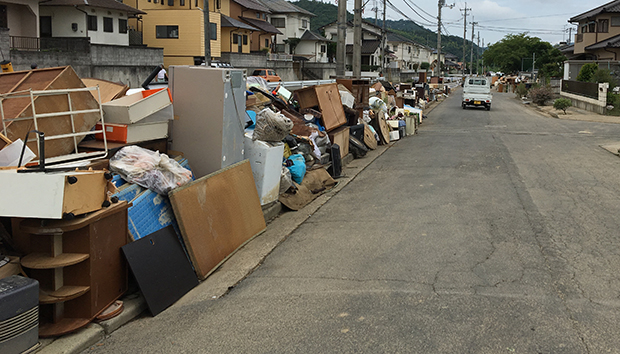 Trash and waterlogged items line the streets of a Japanese community hit hard by recent flooding.

A deluge of rainfall hit several Japanese prefectures such as Hiroshima, Okayama, and Hyogo. Some cities were completely inundated in a matter of hours. The flooding was particularly harsh in some areas because rain fell over mountainous regions and then funneled down, causing heavy flash flooding, reported CNN.

Hundreds of thousands of people in Japan were forced from their homes, including several members from the Okayama Japan Stake and the Matsuyama Japan District.

“In the aftermath of the storm, representatives of the Church’s Asia North Area Welfare Department traveled to Okayama [last week] to distribute resources,” said Church spokesman Daniel Woodruff. “They worked in conjunction with the Japan Voluntary Organizations Active in Disaster (JVOAD) and the Peace Board Volunteer Center.”

Additionally, 20 full-time missionaries and members pulled on yellow vests and worked as Helping Hands volunteers, focusing their efforts in the center of Okayama City, said Woodruff. They also helped residents remove household items damaged by floodwaters from the Suna River.

Meanwhile, Typhoon Maria affected sections of Guam, Taiwan, and China. Prior to the storm, missionaries serving in the Taiwan Taipei Mission restocked their 72-hour emergency kits and waited out the typhoon inside their apartments.

The dramatic weather looks to continue. Storm watchers in the region are now focusing on a tropical system forming east of the Philippines that could develop into a typhoon in the coming days. 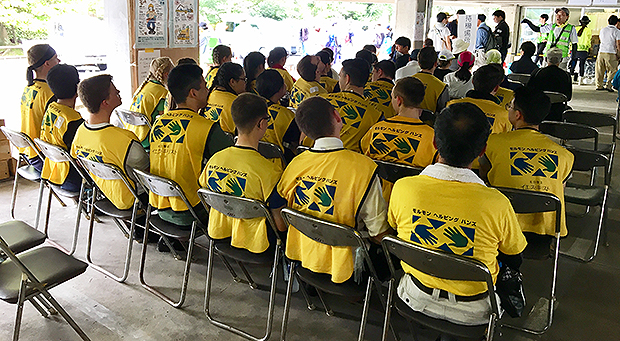 Missionaries and members in familiar yellow Helping Hands vests receive instruction prior to embarking on relief efforts to waterlogged communities in Japan.