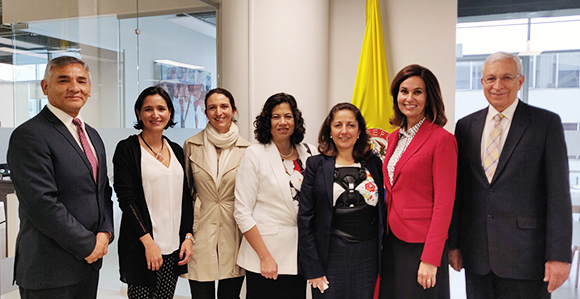 “Everywhere we went we heard stories about how the Venezuelan refugees were being basically scooped up in their arms in Relief Societies and wards. It was really wonderful.” —Sister Lisa L. Harkness of the Primary General Presidency

In the city of Cúcuta, Colombia, on a bridge overlooking the Pamplonita River—which acts as a natural border between Colombia and Venezuela—some 40,000 people cross from east to west each day seeking medicine, aid, comfort, and relief from the ongoing civil unrest in their home country of Venezuela. But after receiving aid and medicine in Colombia, more than half of those crossing the bridge each day return back the way they came, carrying much-needed supplies for their families still in Venezuela.

At the border, many people and organizations stand ready to help the incoming refugees—by providing food, medicine, legal counsel, or even just a place to shower and eat a warm meal. And those who spend their time serving at the border are an embodiment of Christlike love, said Sister Reyna I. Aburto, Second Counselor in the Relief Society General Presidency of The Church of Jesus Christ of Latter-day Saints.

Standing at the border to welcome refugees and help by handing out food supply boxes for those seeking a new home or returning to their families the week before Thanksgiving in November, Sister Aburto said she was reminded of the scripture from Matthew 25:35: “For I was an hungred, and ye gave me meat: I was thirsty, and ye gave me drink: I was a stranger, and ye took me in.”

At the border, people are living that scriptural passage, Sister Aburto said, adding, “We are all children of God, and they are just trying to survive and provide for their families. Everybody is just trying their best.”

After returning from a 10-day trip, from November 15 to 25, to the Church’s South America Northwest Area with Sister Lisa L. Harkness, First Counselor in the Primary General Presidency, Sister Aburto said the thing that impressed her the most from her visits to Colombia, Ecuador, and Peru was the loving spirit of the people there who are continually welcoming refugees from neighboring Venezuela.

“Everybody has felt the impact of the crises,” Sister Harkness said. “But everybody was stepping up by ministering and taking care of and loving each other. Everywhere we went we heard stories about how the Venezuelan refugees were being basically scooped up in their arms in Relief Societies and wards. It was really wonderful.”

Whether at the border in Cúcuta or in a small ward in Lima, Peru, the effects of the Venezuelan crisis can be seen as Venezuelan members and refugees disperse throughout surrounding countries in South America, Sister Harkness explained.

Elder Enrique R. Falabella, a General Authority and President of the South America Northwest Area, accompanied Sister Aburto and Sister Harkness on their visit throughout the area and commented on the impressive ways members in the area have responded to the Venezuelan crisis.

“The members in the area are wonderful; they have Christlike attributes and show great love to Venezuelans who are coming into the neighboring countries,” Elder Falabella said. “Venezuelans are great leaders and are receiving callings and strengthening the Church in Colombia, Ecuador, and Peru. We are so grateful for their participation in the work of salvation. They have a strong testimony and are willing to serve.”

And despite the ongoing crisis in Venezuela, Elder Falabella noted that the Church and its membership there continue to grow as well.

“Our members in Venezuela are suffering, but at the same time their faith and testimony are growing. They know The Lord is among them,” Elder Falabella said. “The Church in Venezuela is also growing. Even though thousands have emigrated, sacrament meeting attendance is still growing. We have witnessed how strong are the Venezuelan missionaries; they are baptizing more people by missionary than in any other country in the area. Hundreds are being ordained to the Melchizedek Priesthood, and hundreds are coming to the temple.”

Prior to visiting the border in Colombia, Sister Aburto and Sister Harkness met with government leaders to discuss how the Church can better help address the ongoing needs of refugees and those offering aid within the country.

In Colombia, the borders are open, and they let everyone in and even provide immigration status to those seeking their help, explained Sister Aburto of the impressive way Colombia is responding to the neighboring crises.

The government is seeking the same outcome as the Church, Sister Harkness said, in that both want to “help alleviate suffering wherever we can.”

The work the government is doing is impressive, she said. “It was a good meeting, and we had an immediate connection because of our shared interests.”

Elder Falabella, who was also in attendance at the meeting, added, “The participants showed a great respect for the things the Church is doing in Colombia. They know what the Church is doing for the people of Colombia and showed gratitude for all we are doing.”

Following their meeting with government officials in Bogotá, the Church leaders went on to visit the Red Cross offices in Cúcuta to deliver a donation of food boxes for families in need from both Venezuela and Colombia. They also went to the border to visit a Red Cross aid station and the Divina Providencia soup kitchen, which is run by the Catholic Church and supported by the World Food Programme. The Church has ongoing partnerships with both the Red Cross and the World Food Programme.

Witnessing many people working together to meet the needs of individuals and families at the border was a powerful experience, Sister Aburto said.

“Seeing the amount of assistance given and the different groups of people providing help was very touching for me,” she said. “They were so impressive because they truly are helping to sustain life among so many of these refugees.”

For Sister Harkness, visiting the border was a reminder of the many ways God works through His children.

“As I watched them walking across the bridge, I knew each one had a story to tell,” she said. “And when I saw someone reaching out to an individual, that was seeing the hand of God—one person helping another person.”

At a meeting with local Church leaders in Cúcuta following their visit to the border, Sister Harkness said she was impressed with the spiritual wisdom of the members there and the deep compassion they have for those who are suffering.

“They were trying to help in any way they could, even though some of them were having difficulties of their own,” Sister Harkness said. “They were doing their best to minister to those in need. . . . It was an example of true, Christlike ministering.”

In addition to their humanitarian visits and meetings with government officials, Sister Harkness and Sister Aburto met with various congregations of Latter-day Saints throughout Colombia, Ecuador, and Peru to facilitate leadership meetings, devotionals, and ministering visits.

In Peru, the Church leaders also took the opportunity to visit the historic Incan citadel of Machu Picchu.

The visit to Machu Picchu allowed the sister leaders to “better understand the wonders of an ancient culture that still has its influence among the people of Peru,” said Elder Falabella. “One can better understand the people when you know their culture. How the people could built such magnificent cities is still a mystery, but it demonstrated that a great civilization was in this land.”

Sister Aburto said that seeing the ruins nestled high in the Andes Mountains was an “out-of-this-world experience.” She added, “It’s a place that is just magic. To see where it is located and to try and picture how they built it and the significance and beauty of the place is stunning.”

But the sweetest experience of their trip, Sister Harkness said, came en route to the airport in Guayaquil, Ecuador, as they made a quick pit stop at the Guayaquil Ecuador Temple. As they walked around the temple grounds and observed the beauty and sacredness of the space, Sister Aburto and Sister Harkness were thrilled to run into a group of young men serving at the temple as they prepared to go on missions.

“They were so enthusiastic about the work,” Sister Harkness said of the young future elders.

Sister Aburto added that “to see their joy and the love that they have for the temple and the covenants that they make there was very refreshing.”

And when the leaders started to hum the familiar tune of “Called to Serve,” they were delighted to hear the future missionaries burst into song and proudly sing about the work of serving the Lord.

“It was a sweet experience to talk to those boys and know that they will have inspiration for their missions and throughout their lives,” Sister Aburto said.

Of the members in the three countries and throughout the area, Sister Harkness said: “They are faithful and enthusiastic about the gospel. They are easily entreated by the Spirit and enormously compassionate.” And because of that, Latter-day Saints in each of these three countries will be a “wonderful influence for peace, stability, and charity within their communities,” she said.

Sister Aburto added, “They are a light to the world and are true disciples of Jesus Christ.” 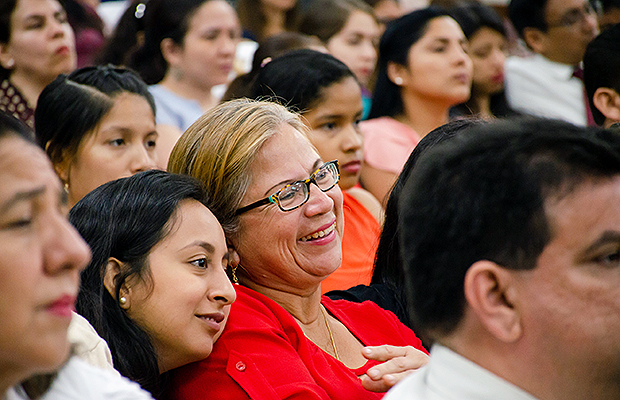 Members listen during a leadership training with Sister Reyna I. Aburto in Guayaquil, Ecuador, during her visit to the South America Northwest Area of the Church in November 2019.

Latter-day Saints ask questions during a leadership meeting with Sister Reyna I. Aburto in Guayaquil, Ecuador, during her visit to the South America Northwest Area of the Church in November 2019. 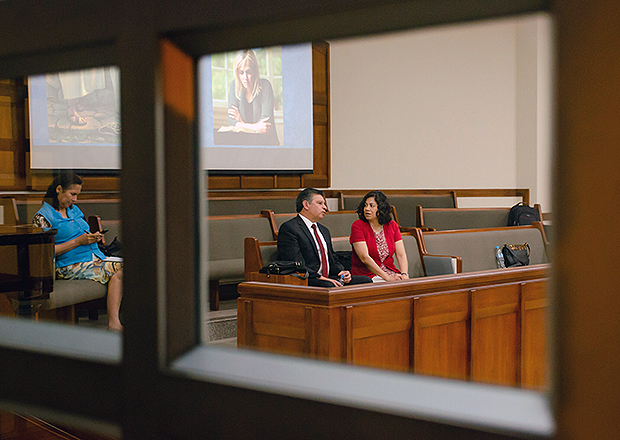 Sister Reyna I. Aburto sits on the stand with her husband, Carlos Aburto, at a leadership meeting with Church members in Guayaquil, Ecuador, during a visit to the South America Northwest Area of the Church in November 2019. 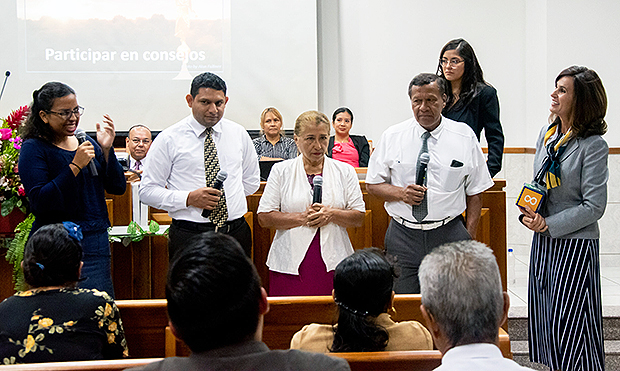 Sister Lisa L. Harkness, right, does a training exercise with Church members at a leadership meeting in Guayaquil, Ecuador, during a visit to the South America Northwest Area of the Church in November 2019. 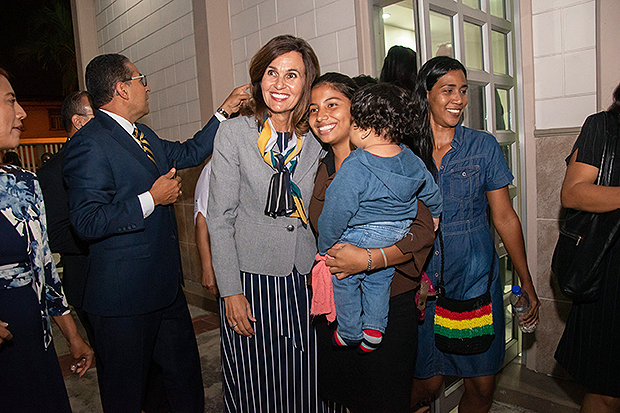 Sister Lisa L. Harkness meets with Latter-day Saints following a devotional in Guayaquil, Ecuador, during a visit to the South America Northwest Area of the Church in November 2019. 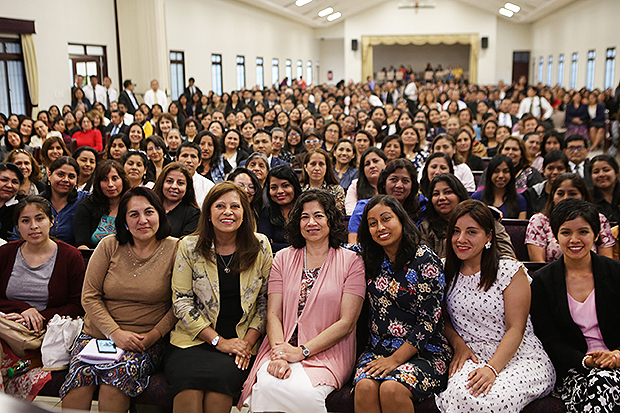 Sister Reyna I. Aburto, center, sits for a photo with members of the Church in Lima, Peru, after a leadership meeting during a visit to the South America Northwest Area of the Church in November 2019.

Sister Lisa L. Harkness, center, sits for a photo with members of the Church in Lima, Peru, after a leadership meeting during a visit to the South America Northwest Area of the Church in November 2019. 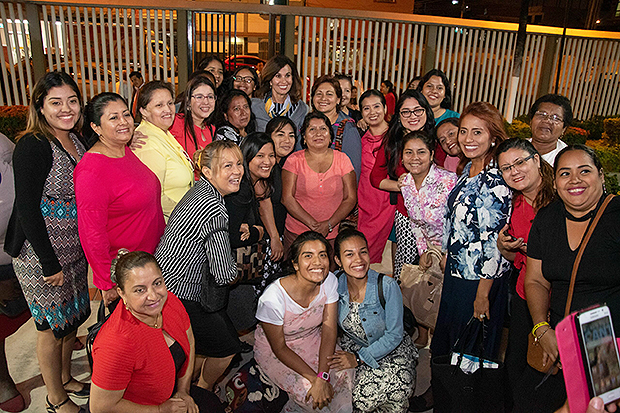 Sister Lisa L. Harkness, back center, poses for a photo with Church members in Guayaquil, Ecuador, following a devotional during a recent visit to the South America Northwest Area of the Church in November 2019.