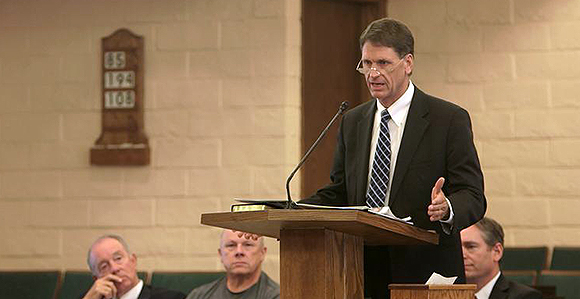 Elder Carl B. Cook of the Seventy was in California meeting people impacted by recent wildfires, October 15, 2017. He spoke to a congregation in Napa during sacrament meeting.

Elder Carl B. Cook of the Seventy and Elder Paul H. Watkins, an Area Seventy, traveled to the Napa Valley Saturday, October 14, to visit with local Church leaders and residents. They came on assignment and were joined by Richard Long, welfare manager for the Church.

“I am delighted to be on an errand of the First Presidency and the Twelve to come and to listen and learn. I came and I’ve been inspired. I’m inspired by what I felt,” Elder Cook told nine congregations in Santa Rosa on Sunday morning during a special sacrament meeting that was broadcast to two other meetinghouses.

“I thank you for your goodness. I thank you for applying the principles of the gospel in your lives and looking to God and allowing Him to bless you,” he said.

The Church leaders also went to Napa in the afternoon for a combined meeting for several congregations. After the worship service, Latter-day Saints in Napa gathered for dinner.

“There’s faith generally that has prompted a lot of community interaction among members of the Church and people who are not of our faith. We've been very impressed with how easy it’s been to commingle our efforts,” said Elder Watkins, who has been overseeing five stakes in northern California impacted by 17 fires. “You have really good people that have done so much, and they’re all local.”

During their visit, the Church leaders met with members Bill and Jennifer Kastner and their 15-year-old son, Stephen, from Napa. The Kastners lost their two-story home in the Atlas Peak area.

“I would’ve liked to think I would stay and fight it, but it’s just one of those things, with 50-mile-an-hour winds and embers flying at you, it’s just not something you’re going to survive,” described Bill. “The wind was blowing the heat away from us. As soon as we got in the car and started to drive down, you could just feel it radiating through the windows. And yeah, it’s a little scary that, you know, are the tires going to make it? Are the windows going to burst out?”

“My faith gets me through, but the members make it easy,” said Bill, who helped build the custom home.

Bill Kastner said losing their home has been a humbling experience. “It’s the first time in my life; I was a bishop and I’m, you know, real familiar with the welfare program. And I never thought I would be a recipient of other people’s service and kindness.”

The Kastners hope to rebuild their home in Napa. It was a good life. “We raised our five children there, and they all loved that place, and we had family dinners and all our memories are there,” reflected Jennifer.

“You almost feel like it’s not real. You feel like you’re just going to be able to come back to your house in a couple days,” said Stephen. “We’re just really looking forward to getting back to where we were and getting the house rebuilt.”

Mormon missionaries have been working to serve evacuees in northern California. Elder Cook and Elder Watkins spent time with the young missionaries as well as the senior missionary couples in the Santa Rosa California Mission Saturday evening.

Elder Cook told the missionaries that senior Church leaders and members are praying that they will be able to “reach out and succor” residents impacted by the fires. “Our hearts particularly go out to those families in the community who have lost loved ones and to those who have lost their homes and those who have experienced loss in relationships and property.”

The Church leaders also stopped by the Church’s Stony Point meetinghouse in Santa Rosa to offer comfort to some of the evacuees who were spending the night in the building that has been used as a temporary shelter for the past week.

The wildfires in northern California have destroyed thousands of structures and claimed the lives of at least 40 people over the past week. Dozens of people are still reported missing.

“Individually, I’ve noticed that those people are in varying degrees prepared,” said Elder Watkins. “Interacting with them has been so helpful for me to see what preparation looks like and what it looks like to move through these days of hardship for these good people.”

He continued, “In many cases they’ve known about things to do that they haven’t quite done. And for them this is a wake-up call. For others, it becomes a sense of solace because of ample efforts to have them focus on things to do, to be prepared for situations like this; they’re very grateful.”

Jennifer Kastner suggests residents make a customized priority list of items they would take from their homes in an emergency.

She said, “So many people have called me when they were asked to evacuate and said, ‘In retrospect, what would you have brought?’ And I know exactly what I would’ve brought. I know that’s been helpful to people, and I’m glad to be able to help them that way because I would hate for anyone else to experience the same.” Given more time, Jennifer said she would have grabbed some of her favorite clothing items and art portfolios left in her children’s bedrooms.

“It will be pleasing to go back and to report to the Brethren as they ask, ‘Well, what do they need?’ I will report that they have what they need; they have the help of heaven and in the current Church organization in the stake, that things are going very well, but [I will] ask the Brethren to continue to pray for you, as I know they will,” said Elder Cook.

The Church is closely monitoring the California wildfires. Local Latter-day Saints will continue to give community service, offer shelter, and provide additional support as needed. 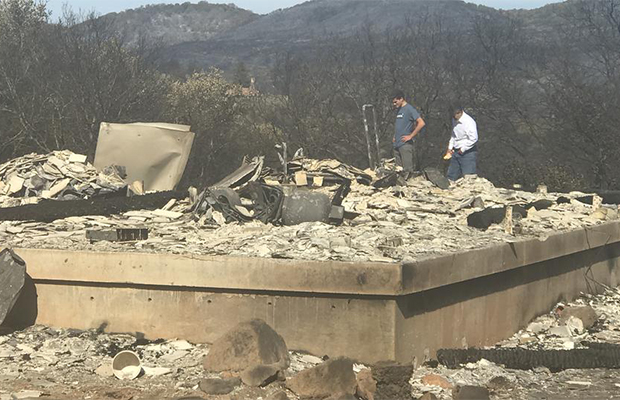 Bill Kastner and his son, Stephen, look through the ruins of their Napa, California, home that was destroyed by a wildfire, October 15, 2017. Photo by Isaac Goeckeritz. 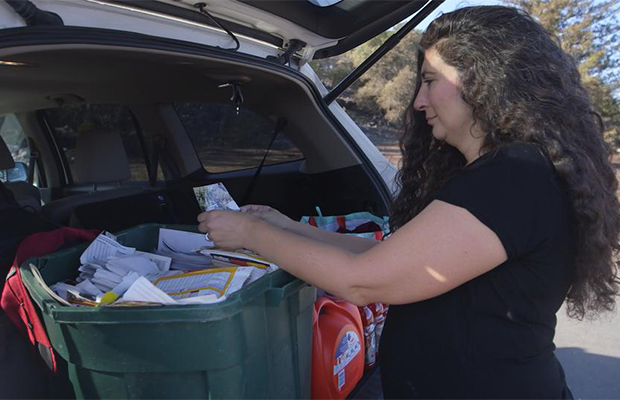 Napa resident Jennifer Kastner finds solace in having been able to save some family photos from the recent wildfires. Photo by Isaac Goeckeritz. 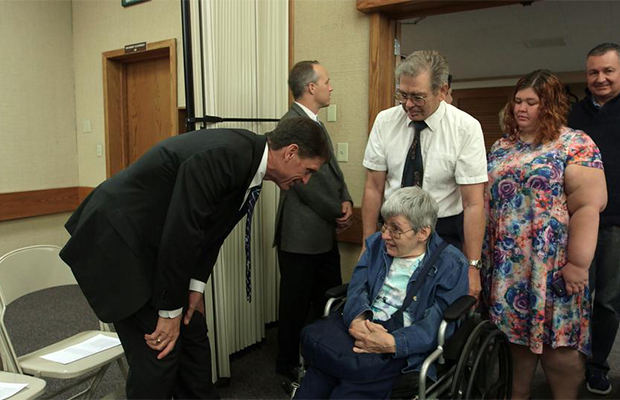 Elder Carl B. Cook of the Seventy was in California to meet people impacted by the recent wildfires. He greets some members attending a special sacrament service in Santa Rosa, October 15, 2017. Photo by Isaac Goeckeritz. 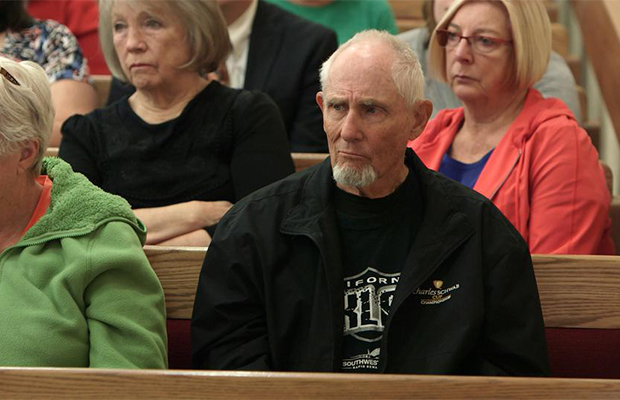 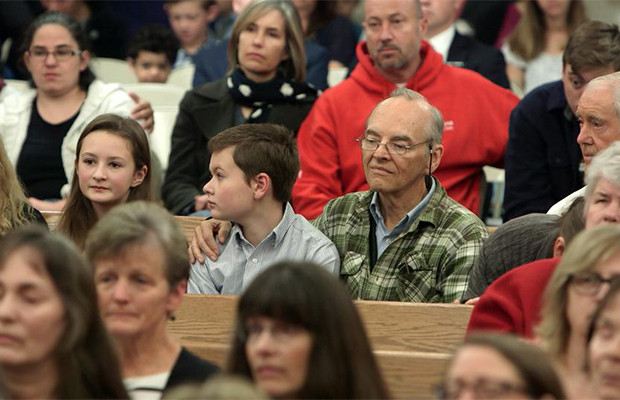 Residents affected by the recent California wildfires met for a worship service in a local meetinghouse in Santa Rosa, receiving comfort from leaders of The Church of Jesus Christ of Latter-day Saints, October 15, 2017. Photo by Isaac Goeckeritz. 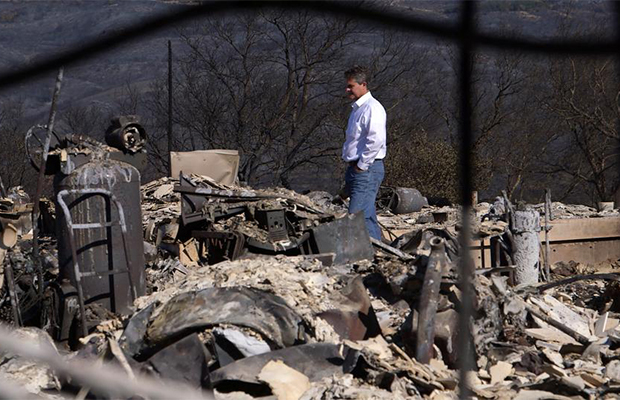 Law enforcement has allowed a few residents to return to their homes to salvage what is left from the devastating California wildfires. Church leaders traveled to the area October 14–15, 2017, to meet with families impacted by the fires. Photo by Isaac Goeckeritz. 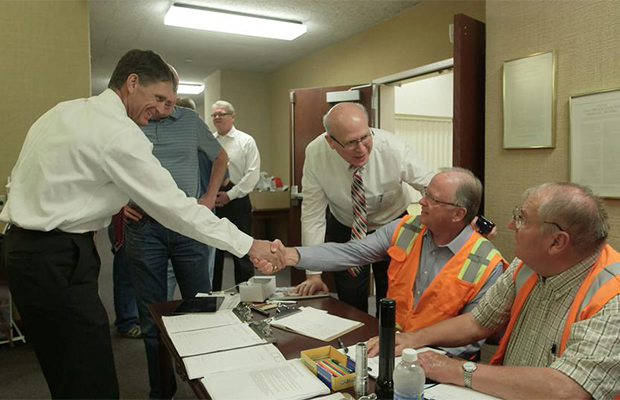 Elder Carl B. Cook of the Seventy shakes hands with volunteers at a meetinghouse in Santa Rosa being used as a temporary shelter for wildfire evacuees, October, 14, 2017. Photo by Isaac Goeckeritz.