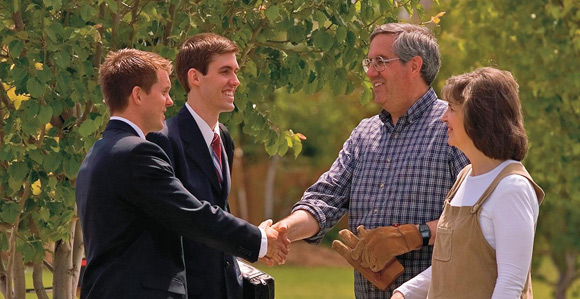 The Church anticipates lowering the age requirement will significantly increase the number of missionaries who will serve by expanding the options for when they may begin their service.

“God is hastening His work. And He needs more and more willing and worthy missionaries to spread the light and the truth and the hope and the salvation of the gospel of Jesus Christ to an often dark and fearful world.” —Elder Jeffrey R. Holland of the Quorum of the Twelve Apostles

With the opening of the 182nd Semiannual General Conference of The Church of Jesus Christ of Latter-day Saints, President Thomas S. Monson surprised members with an announcement that, effective immediately, men may now begin serving missions at age 18 and women at age 19.

During a press conference following the Saturday morning session, Elders Russell M. Nelson and Jeffrey R. Holland of the Quorum of the Twelve Apostles and Elder David F. Evans of the Seventy shared some more information about this change in policy.

Elder Holland revealed that very few people were aware this change would be announced. Nearly all of the General Authorities—except for the First Presidency and Quorum of the Twelve Apostles—all mission presidents, university presidents and admissions officers, and all MTC administrators were unaware of the change until President Monson made the announcement.

Church leaders hope the move will expand the opportunities for young members of the Church Saints to serve full-time missions.

Elder Nelson emphasized that the change is an option, not an edict:

“These age adjustments are new options now available to bishops in evaluating what is best for each of their youth,” he said. He continued, “Young men and young women should not begin their service before they are ready spiritually and temporally.”

He stated that schooling, family circumstances, health, and so forth still remain important considerations for the timing of missionary service.

Over the past decade, permission has been given in 48 countries to let young men serve at age 18. Now, the Church will have a single policy worldwide.

Since President Monson’s appeal for more full-time and couple missionaries two years ago, during October 2010 general conference, the response by Church members has been great—the number of full-time elders serving has increased by six percent; the number of sisters by 12 percent, and the number of couples by 18 percent.

Elder Holland elaborated on some details and some changes that will have to be made in light of the new policy:

1) Prospective missionaries, he said, will be asked to enhance their pre-mission preparation, including total personal worthiness supplemented by gospel study (especially the Book of Mormon), seminary and Institute classes, and systematic study of Preach My Gospel.

“God is hastening His work,” Elder Holland said, directing his remarks to the young men and women of the Church. “And He needs more and more willing and worthy missionaries to spread the light and the truth and the hope and the salvation of the gospel of Jesus Christ to an often dark and fearful world. … This isn’t about you. It is about the sweet and pure message you are being asked to bear.”

Elder Holland asked parents to take a strong hand in this preparation and not to expect the Missionary Department or MTCs or local leaders to direct everything.

2) Time at each of the Church’s 15 Missionary Training Centers (MTCs) will be reduced by one-third for all missionaries.

3) At the Church’s flagship MTC in Provo, Utah, new instructors and staff will have to be hired and the amount of housing will have to be increased almost immediately. The Church is considering comparable expansion at some other MTCs, but is not planning on building any new MTCs at this time.

4) Missionaries will benefit from a recently implemented 12-week training course being administered in the mission field through mission presidents. The program is designed to improve every missionary’s teaching skills while in the field.

5) The Church is considering adding new missions in the future. Until those new missions are created, the existing 347 missions will absorb any increase in the number of missionaries.

6) Prospective missionaries may be recommended by their bishop and stake president for full-time service 120 days prior to their birthday or to their availability date (which takes into account high school graduation or its equivalent). Young men may enter the MTC after graduating and reaching 18 years of age. Women may enter after their 19th birthday. No adjustment has been made to the upper age limit (25 years for young men, no limit for young women).