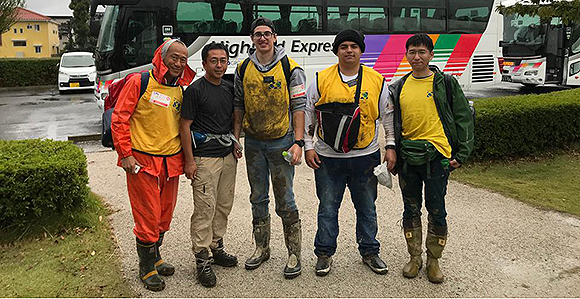 Helping Hands of The Church of Jesus Christ of Latter-day Saints participate in reconstruction support in Nagano City following damages from Typhoon Hagibis and its aftermath in October 2019.

Amidst continued efforts in Japan to clean up and repair damages done in the wake of Typhoon Hagibis, which hit the Tokyo area on October 12, members and missionaries in the Chiba and Fukushima prefectures were inundated by further flooding and mudslides due to torrential rains October 25–26.

In a disaster report from the Church’s Asia North Area offices, it was confirmed by President Osamu Sekiguchi, president of the Japan Tokyo North Mission, that all missionaries in the affected areas are safe.

It was also reported that damages to members’ homes and property in the affected areas were minimal. Two member families’ homes were affected and two members’ vehicles had been submerged in the floods.

Minor damage to a few of the Church’s meetinghouses had been reported earlier in the month following initial clean-up efforts in the wake of Typhoon Hagibis, but no updates have been reported since the continued flooding over the weekend in Chiba and Fukushima.

Speaking of the recovery efforts, Elder Takashi Wada, General Authority Seventy and First Counselor in the Asia North Area Presidency, told the Church News, “Over the past few weeks, two major typhoons affected several parts of the mainland of Japan. Fortunately, no member of the Church was injured. Several members’ households sustained damage to their home or vehicles. However, we have received reports that they have been properly ministered to by their bishops and members.”

Elder Wada also noted that more than 280 volunteers from the Church have donated 1,200 hours of service to the clean-up effort so far. 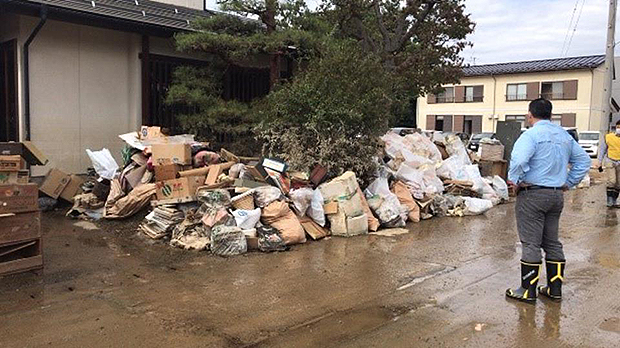 Elder Takashi Wada in Nangano. The Area Presidency is exploring options for solving the garbage removal problem in Nagano City following the damages of Typhoon Hagibis in October 2019.

“They have served in the most severely damaged areas, including the Nagano, Fukushima, Miyagi, and Tochigi prefectures,” Elder Wada said. “Those stakes affected by the storms are diligently planning to organize Helping Hands crews to assist with the clean-up efforts.”

An updated report from the Fire and Disaster Management Agency in Japan on October 27 noted that the confirmed number of deaths from the typhoon and its aftermath now stands at 90 from 11 different prefectures. The report also indicated that eight people are still considered missing and that there have been 447 reported injuries. Of the number of homes affected, 600 have been listed as destroyed, with another 7,909 listed as partially damaged.

Rescue and clean-up efforts continue throughout areas affected by the storms.

President Sekiguchi is coordinating clean-up efforts and service by missionaries and members in the northern areas, the Church’s area report noted.

According to the Meteorological Agency, the rains from the most recent storm brought more rainfall in a 12-hour period than the average total for the month of October.

On Saturday, October 26, the Japan Times reported Japanese Prime Minister Shinzo Abe, who held an emergency task force meeting in response to the continued flooding, called for “the utmost effort in rescue and relief operations.” It was also noted that Abe “urges quick repairs of electricity, water and other essential services to help restore the lives of the disaster-hit residents.” 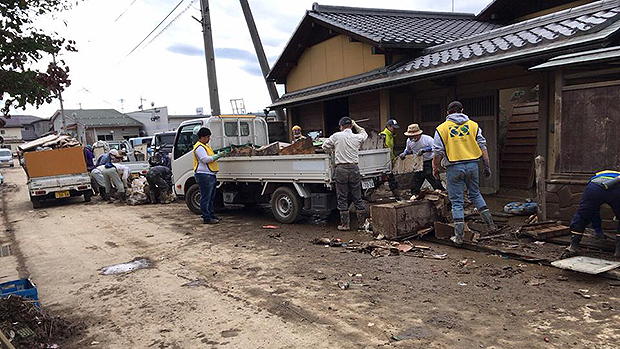 Volunteers carry out household goods from damaged houses following flooding from Typhoon Hagibis and its aftermath in October 2019.