"I think that everyone everywhere has pretty much the same problems. Family problems, economic problems, health problems, etc. But the people who are happiest approach all those problems with faith in the Lord.” —Jean B. Bingham, Relief Society General President

Saturday mornings at the Mexico City Mexico Temple baptistry are busy—lines-out-the-door busy. And, in some ways, those lines at the baptistry doors represent the strength of the Church and the dedication of its membership throughout the Mexico Area, explained Jean B. Bingham, Relief Society General President, after returning from a visit to the area in December 2019.

Most Saturdays, some 50 youth wait to enter the baptistry starting at 5:30 a.m., with similar-sized groups arriving every half hour for most of the morning, “which makes for a very full temple,” President Bingham said.

Sister Becky Craven, Second Counselor in the Young Women General Presidency, added: “We were overwhelmed with love for the faithful youth in Mexico City as we heard from the temple president how dedicated they are in attending the temple. . . . They are bringing their own family names and are performing the needed ordinances for their ancestors.”

The dedication of these youth, not only in attending the temple but also to living the gospel, is reflective of the power that comes from the multigenerational growth of the Church there, President Bingham explained. And that strength was more apparent than ever during President Bingham and Sister Craven’s recent visit to the area.

Although it is no secret the Mexico Area of the Church is large and has been well established since the late 1800s, being there to witness the dedication of the large membership was still a bit of a revelation for the visiting general Church leaders.

“I was astounded to realize how many members are in Mexico,” President Bingham said, noting she hadn’t previously realized the area had 13 temples and 220 stakes. “I just did not have a concept of how many members there are.” But it’s not just the numbers that are impressive, she continued. It’s their dedication to sharing the gospel and participating in the work of the ongoing Restoration.

Joy D. Jones, Primary General President, who joined President Bingham and Sister Craven during the December area visit, added: “The members in Mexico are a temple-loving people, and they show it by being in the Lord’s house often. They appreciate having temples nearby. The youth are being taught of the blessings of the temple and the importance of participating in temple ordinances.”

Not only are members flocking to the temples, President Bingham said; they are ministering to one another, they are faithfully serving in their callings, and they are teaching the gospel through families and are strengthening the rising generation.

“That’s one message that was clear,” President Bingham said. “They understand how important the rising generation is.” 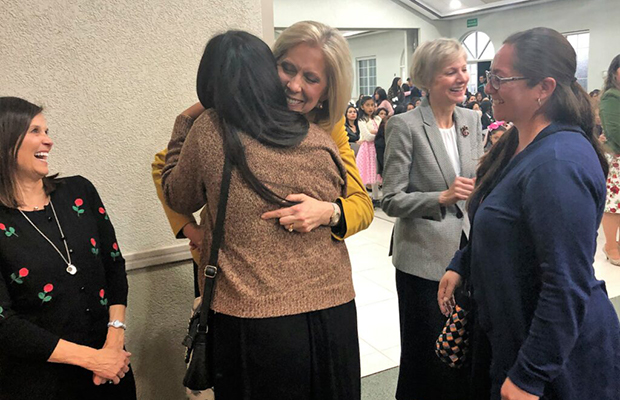 The Strength of the Youth

As President Jones noted, the number of Primary-aged girls in attendance at the various meetings and devotionals held during their visit was impressive, as was their willingness to participate in the meetings. 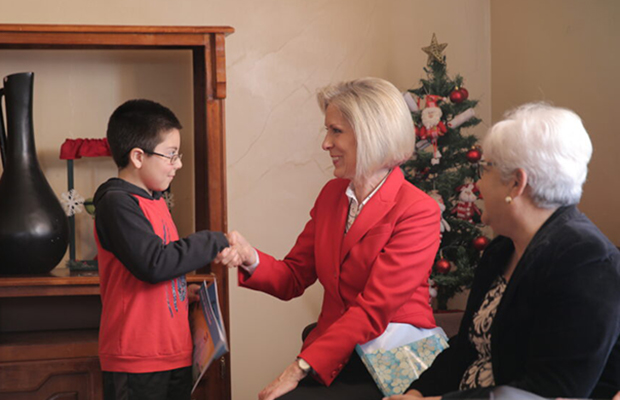 President Joy D. Jones shakes hands with a young Primary child during a ministering visit with families in the Mexico Area in December 2019.

“Their comments reflected their testimonies and their devotion to the gospel and eternal families,” President Jones said. “Many came with their mothers and their grandmothers. I enjoyed witnessing the sweet, loving connection between them. I was also pleased to hear the children in Primary share their understanding of the plan of salvation and what they were doing to become more like the Savior as they serve their families, pray, and study the scriptures.”

Youth and children, both in their homes and at church, are becoming leaders in their own right and are strengthening one another in impressive ways, explained Sister Craven and President Jones.

“We saw such strength in the youth we met,” Sister Craven said. While many of the youth come from long family lines of faithful members with strong gospel traditions, there are also many youth who are the only members or the only active members of their families. Through their faith and examples in reaching out and leading one another, all of these youth help to continue building the generations of “faithful families, rooted in the gospel and sealed in the temple,” Sister Craven said.

“The young women we met are actively reaching out and rescuing those who are not currently attending Sunday meetings and activities,” she continued, describing how one Young Women class president confidently explained how there are no less-active girls in their class.

“She related that when she was first called, eight girls were not attending,” Sister Craven said. “She and her counselors visited the eight girls, inviting each of them to participate, and with consistent effort, soon all of them were coming and enjoying the strength of being together in the class.”

The Primary children, too, are learning to lead in their own ways, President Jones explained. Sharing an experience she had while visiting a ward in the Mexico City Tacubaya Stake, President Jones described how a confident young girl came up to her and invited her to Primary.

“After sacrament meeting, she came up to the stand and took my hand,” President Jones said. “I watched her as she interacted with friends in Primary, as she sang, and as she read from the scriptures. It was inspiring to witness the spiritual strength and happiness of this sweet girl and the other children in Primary. They were so attentive and responsive, and they exhibited a love for learning the gospel and sharing the righteous choices they were making in their lives.” 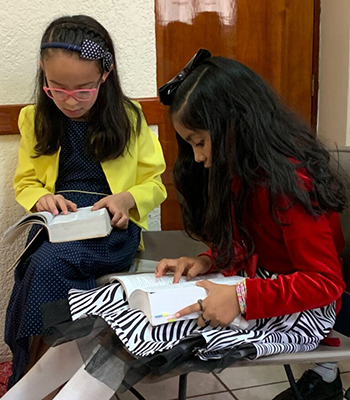 Primary children in the Mexico Area study the scriptures.

The Strength of the Culture

Some of the many cultural strengths in Mexico, which the gospel helps to enhance, are the people’s natural resilience and their inclination toward faith. Despite the various challenges people in the area encounter, they seem to have a cheerful optimism throughout even the most difficult situations, President Bingham said.

“I think that everyone everywhere has pretty much the same problems. Family problems, economic problems, health problems, etc.,” she said. “But the people who are happiest approach all those problems with faith in the Lord.” And that is exactly what members in Mexico do.

For example, President Bingham met the Carrillo family during a ministering visit to the family’s home in Chihuahua, Mexico. The family recently received the tragic news that their youngest daughter, Ana Camila, has leukemia. The father, Evaristo Carrillo, had just been called as a new bishop around the time they learned of their daughter’s diagnosis, and the family really struggled, President Bingham explained.

“Here they were, doing everything they should be doing, they’re clearly faithful, and yet this is what they get? The possibility of losing their youngest child?” she said. “But by the time I met them—a month after the diagnosis—they were still teary-eyed but not in the same way. It wasn’t that they were fearful or desperate; they were grateful, and they had the confidence that whatever would come, the Lord would be in charge.” 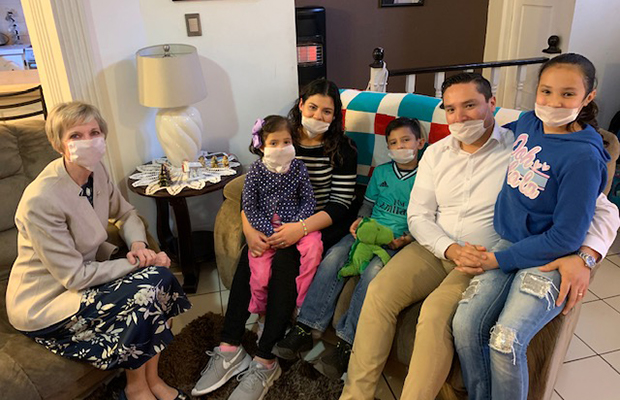 Another strength is the supportive nature of families in the culture, President Bingham said. “Grandparents, aunts, uncles, and cousins take care of each other.”

As the Restoration of the gospel continues to unfold, Satan is working hard to destroy families, explained Elder John C. Pingree Jr., General Authority Seventy and Second Counselor in the Mexico Area Presidency. But as families in the Church work together to care for one another, strength can be found through unity.

“When a married man and woman work to care for one another and to keep their temple covenants, God will protect that union and endow it with divine power,” Elder Pingree said. The visiting general leaders and their husbands were positive examples of the importance of that union.

“During our travels together, the sisters not only talked about the importance of marriage in their sermons but also demonstrated it in their interactions with their husbands, who accompanied them on the trip,” he said.

Their visit also offered positive instruction for how members can work together for greater unity in their responsibilities across the differing organizations in the Church.

“Too often in the Church we tend to be in our silos. But to really be effective, we need to collaborate, coordinate, and support one another and strive for unity,” President Bingham said. In meeting with women around the world, one of the things the general women leaders strive to continually highlight is the automatic and continual membership in the Relief Society for all women—even those serving in the Primary and Young Women. Another principle they focus on is the importance of unity with the elders quorum and Young Men organizations.

“Elders quorum leaders and Relief Society leaders have a critical responsibility for the work of salvation in their respective wards and branches,” Elder Pingree said. “Moreover, as they plan, coordinate, and serve in unison, the Lord will empower them to accomplish more together than they could if working separately.”

Latter-day Saints in Mexico, like Saints across the world, are continually working to grow in the gospel of Christ as individuals and families. They, like all members, have their shortcomings and areas they need to work on. Nevertheless, through their multigenerational strength and dedication to temple work, they are becoming leaders in the work of salvation, President Bingham explained.

The people of Mexico exemplify the love of Christ through their humility and generosity, President Jones added.

“They are strong and resilient. They know they are God’s children and love and serve Him faithfully,” she said. “They filled me with gratitude for our divine heritage and united goal to return as families to our Heavenly Father’s presence.” 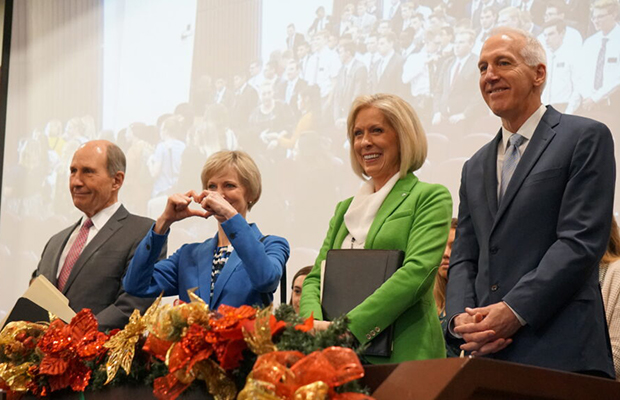 President Joy D. Jones, right, and President Jean B. Bingham stand following a devotional in the Mexico Area in December 2019.