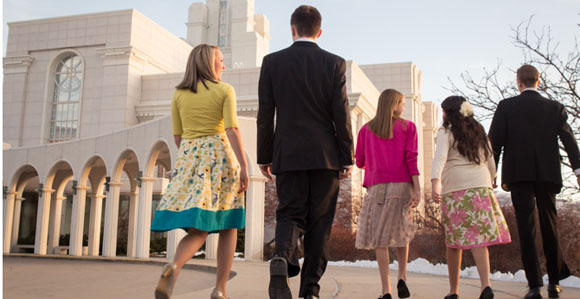 In the midst of changes that require Latter-day Saint teenagers to take a greater role in missionary preparation, family history and temple work, and Sunday instruction, leaders say the youth of the Church have been “called to action” and asked to “arise and shine forth” (D&C 115:5).

The changes, which all came to the forefront during the Church’s 182nd Semiannual General Conference this October, make one thing obvious: “The Lord has something He wants to do,” said Elder Paul B. Pieper of the Seventy.

Making reference to an announcement by President Thomas S. Monson lowering the age young men and young women can begin missionary service, to new youth curriculum, and to a First Presidency letter asking that youth get involved in family history research and take family names to the temple, Elder Pieper said he did not see the “three strands coming together” before conference. “I remember going to conference … and asking myself, ‘How did all of this get correlated?’ It was obvious it was the Lord’s hand.”

The Lord was saying, “Let’s get to work and build the kingdom. It is time to step forward and really begin to do things,” Elder Pieper added.

Elder Packer agreed, noting that there “is that underlying feeling of hastening of the work that comes from all of these things that are in the hearts and the minds of the people.”

Making reference to a revelation the Prophet Joseph received in 1832, Elder Zwick said the Lord’s words are clear: “I will hasten my work in its time.”

It is a very powerful message that God trusts His youth, said Elder Brimhall.

“It is just like when the Lord does anything—all the things fall into place at the right time, and that is what is happening with this,” said Elder Johnson, noting that those working on the new youth curriculum did not know there would be a shift in the age when missionaries can begin service. “I don’t think it’s by coincidence. That’s the way the Lord works, and I think the youth are prepared. They are ready for it.”

That also speaks well of parents, who have prepared and will continue to prepare their children well, said Sister Burton.

Elder Packer said if one sits back and examines the changes, they indicate a renewed “focus on fundamentals.”

“I can see other things that have been nice to do sliding into the background a little bit and a real focus on what is key and necessary,” he explained.

Elder Walker said one of the most wonderful things that has recently happened is the First Presidency letter encouraging Church members to complete their family history and take those names to the temple. “We have had a cultural phenomenon over the last few years where the youth of the Church have gone to the temple to do baptisms for the dead like never before. And the First Presidency authorized the youth being able to have their own limited use recommend, which has been a really wonderful thing. … But many of them were just involved in going to the temple and doing the baptisms.”

The letter, he continued, promises the youth that their temple experience will be greatly enriched by doing family history work. “When you think about young people anxiously engaged in doing the work in the temple and they understand the doctrine and the rationale, they are not just anxiously engaged in an activity. That really helps to prepare them spiritually for all these wonderful things that are in store for them.”

Elder Packer said that recently he heard of a young woman who stood and shared her testimony of family history work: “This is a whole lot more fun than what the old people said it was going to be,” she said.

He said that a temple president reported that when youth stand proxy in baptism for a name they come out smiling. “When they do it for an ancestor they have tears in their eyes. They feel deeper; they feel something more.”

Helping the youth gain perspective is also a goal of the new youth curriculum—where learning resources replace lesson manuals, said Elder Pieper. The curriculum will allow youth instructors to determine what they need to build into each Sunday experience to prepare youth for temple and family history work and missionary service.

“The new MTC is the home,” said Elder Packer. “The new family history center is the home. This teaching model [the new curriculum] is going to help the youth and the parents, both, in that role.”

Elder Pieper said the changes bring a “real urgency” to parents, who are feeling that urgency.

The message to parents is “Church leaders trust you as parents and trust these young men and young women who are being raised in your homes,” said Elder Zwick. “You can trust them too. They are going to go out with the inspired gifts that you demonstrated and lived in your home. They are just going to get out there and do it a little sooner.”

It is interesting that one year ago the Church began using in-field training for new missionaries coming out of the MTC, said Elder Johnson. “That was not done in connection with the missionary age change, but it is needed now,” he noted. “Sometimes the Lord does that—He puts in place something that is very good and helpful, and if we could see down the road a little ways we can tell it’s not just very good and helpful, it’s necessary. That’s the way He works.”

Elder Zwick said after the missionary announcement was made, many youth tweeted responses across the globe. Some spoke of the convenience of the change. “Then you had the other side who said, ‘This is not about us. This is about the Lord hastening His work.’ … This is about the Spirit of the Lord preparing these young people. He is hastening His work, and they are responding to a prophet’s invitation to serve.”

“I can remember being with President [Thomas S.] Monson on a temple trip,” said Elder Walker. “President Monson said, ‘I think the youth today are stronger than they have ever been before in the history of the Church.’ I think his decision to do this is partly an indication that is how he feels about the youth of the Church.”

All the changes move the “Church to where it needs to be, where it’s prophesied to be,” said Elder Johnson. “The Lord knows what the future is, and … this is just one of the many things He is doing to advance that kingdom, to help it roll forth.”

Elder Pieper said, when contemplating all that happened during general conference this October, he sees “a prophet with keys, flinging doors open and saying, ‘There you go.’ We are inviting you to come and get engaged in this work,” he said. “It is the Lord’s time now. We all know that. We all felt it. The Church is feeling it. Of course it will work.”