Elder Russell M. Nelson and his wife, Sister Wendy Nelson, pose with a child from the cast of the British Pageant.

“This story you will share and have worked so hard in presenting is true, and the impact of it will be told over and over again. It’s a great story, as good as any in the history of the Church.” —Elder M. Russell Ballard of the Quorum of the Twelve

August 8 and 9 saw three Apostles, the senior President of the Presidency of the Seventy, and the Europe Area Presidency, accompanied by their wives, take time out from training new mission presidents and missionaries to attend performances of the British Pageant on the grounds of the Preston England Temple in Chorley, where they also met on sequential days with pageant cast, crew, and organizers.

Speaking at a devotional for cast and crew on August 8 before viewing the pageant later that evening, Elder Ballard recounted how his ancestors were British converts who left everything to help the Church. “Their descendants have helped carry the gospel to the ends of the world.”

Elder Ballard served as a missionary in Britain, including in the Preston area in 1948, preaching from the same obelisk in the Market Place where Apostles Heber C. Kimball and Orson Hyde preached in 1837, as did, in 1933, the young missionary Elder Gordon B. Hinckley, who became the 15th President of the Church.

“Never underestimate the tremendous support Great Britain has had in the establishment of the kingdom of God,” said Elder Ballard. “This story you will share and have worked so hard in presenting is true, and the impact of it will be told over and over again. It’s a great story, as good as any in the history of the Church.”

Elder Ballard had advice and a blessing for the cast and crew: “I pray the Lord will bless you that in your hearts will be a fervent recommitment to telling this story when you get home. Let this be a beginning; shout it from the rooftops, if necessary. Proclaim the glorious recognition of the Restoration of the gospel through Joseph Smith. Roll up your sleeves and go back to building the kingdom of God for the coming of the Lord Jesus Christ.” 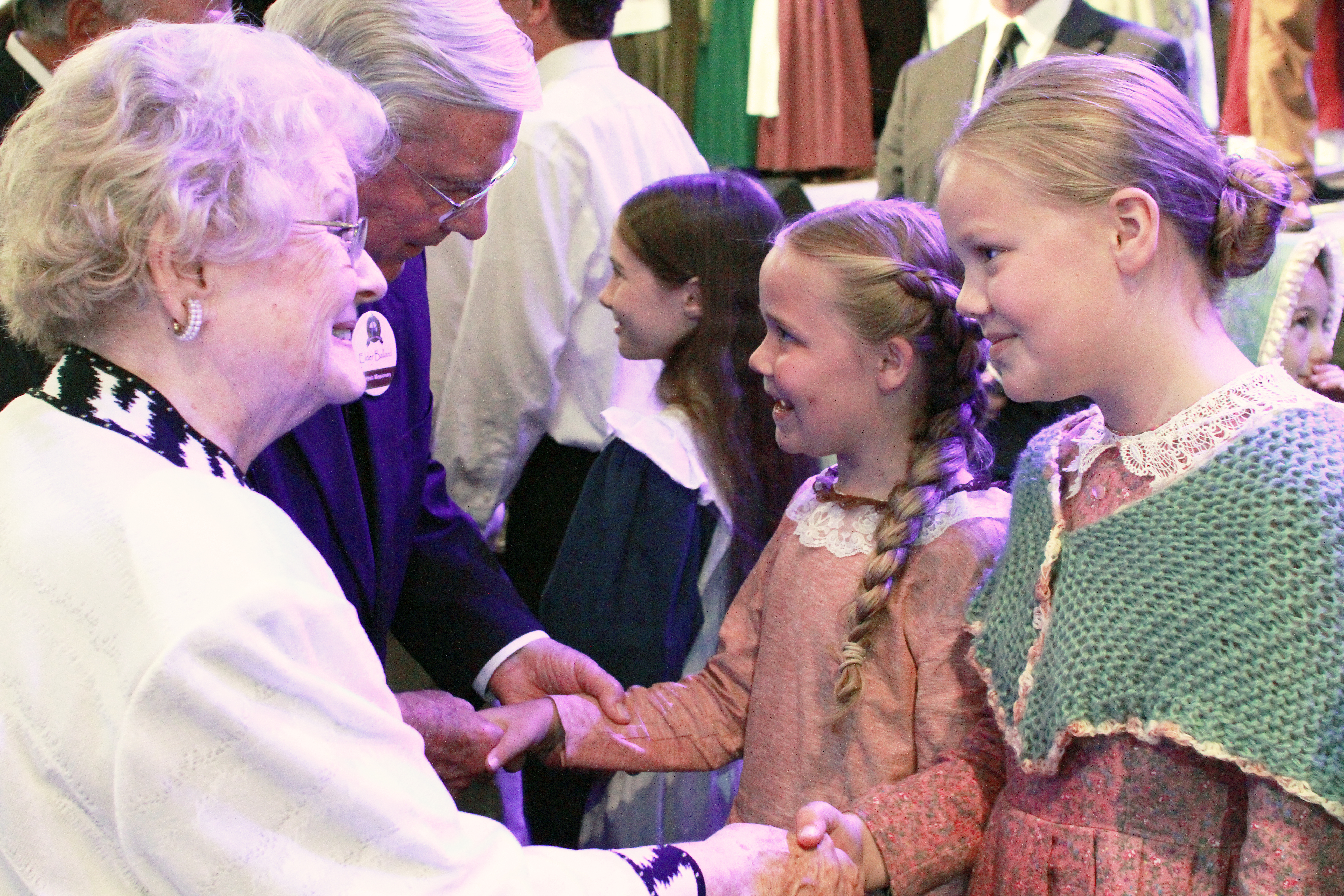 Following that night’s pageant performance, Elder Ballard and Elder Rasband wrote to the pageant’s president, Stephen Kerr: “The enthusiasm and heartfelt participation of the cast was infectious to the audience. The result of all your preparation was a stunningly moving presentation that causes one to ponder deeply the message of the Restoration. Members and friends alike had to feel this in their own heart as the pageant so frequently suggests.”

In a subsequent devotional on August 9, Elder Nelson spoke of the future of the Church with more stakes and missions in the land and said, “You are the future of the Church in the British Isles.” He pronounced a blessing on the cast and crew that they would have joy in service through good times and bad. “I bless you that your families will be strengthened in the gospel through your service. I bless you with health, strength, and vigor in your service. I bless you that you will be a beacon to your contacts. I bless you with health and healing.”

In his remarks, Elder Holland affirmed that the mission that began there in 1837 literally saved the Church. “The Prophet Joseph needed help, and it came from the British Saints,” he said. He added that he felt impressed that the early Apostles were watching down on the pageant.

Asked for his impressions of the pageant, Elder Ballard said, “The music and the singing was spectacular; I mean it was marvelous. I had a hard time staying in my seat I was so excited about it and kept wiping away the tears from the emotion of the reality of what this great land, the British Isles, has done for the establishment of the kingdom of God once again upon the earth.” Asked if he had a favorite part, he quipped, “Yes, every scene!”

Elder Rasband said that both he and his wife, Sister Melanie Rasband, were very moved by the pageant. “I am a product of that story, a Sunderland laddie boy. My ancestors responded to the call to leave the British Isles and go west to Utah, and as I saw that played out on the stage last night, it was very emotional for me.”

A convert to the Church, Elder Kearon reflected on what the pageant could be through the perspective of a nonmember. “I think it captured and encapsulated the history and the background so well and told it in a joyful way. This was one of the first things I observed about members of the Church before I believed what we believe. I scratched my head as to why these Mormons are such happy people, and last night we really captured that. I’m just full of admiration for all of our friends who have worked so very hard to produce it, polish it, and bring it to a joyful conclusion.” He said that, for him, the pageant was just as much about the future as about the past. “It’s about what’s possible when perhaps it doesn’t look possible, when we have such complex and busy daily lives.”

Asked his views of the future of the Church in the United Kingdom, Elder Nelson said, “I see a great resurgence of activity and continuing growth for the Church, not only here in the United Kingdom but in the whole of Europe. We know that the number of missions is increasing, the number of converts will continue to increase, and the activity in the temples is booming, and it will continue to go up. As the world ripens in iniquity, the standard, the light, and the love of the gospel is going to loom even more apparent to everyone, and the Church will grow.”

Elder Ballard said, “The way the pageant handled the Reformation and the pre-preparation by those who were not part of the Restoration yet was a very, very significant thing because as you heard the voices of [William] Tyndale and others who gave their lives to bring about the Bible, just so that the plough boy would be able to have the word of God, they laid the groundwork for when Joseph and his experience was introduced. It just seemed that they were fulfilling earlier prophecy from earlier protestors of Christendom; it was a great thing to do.” 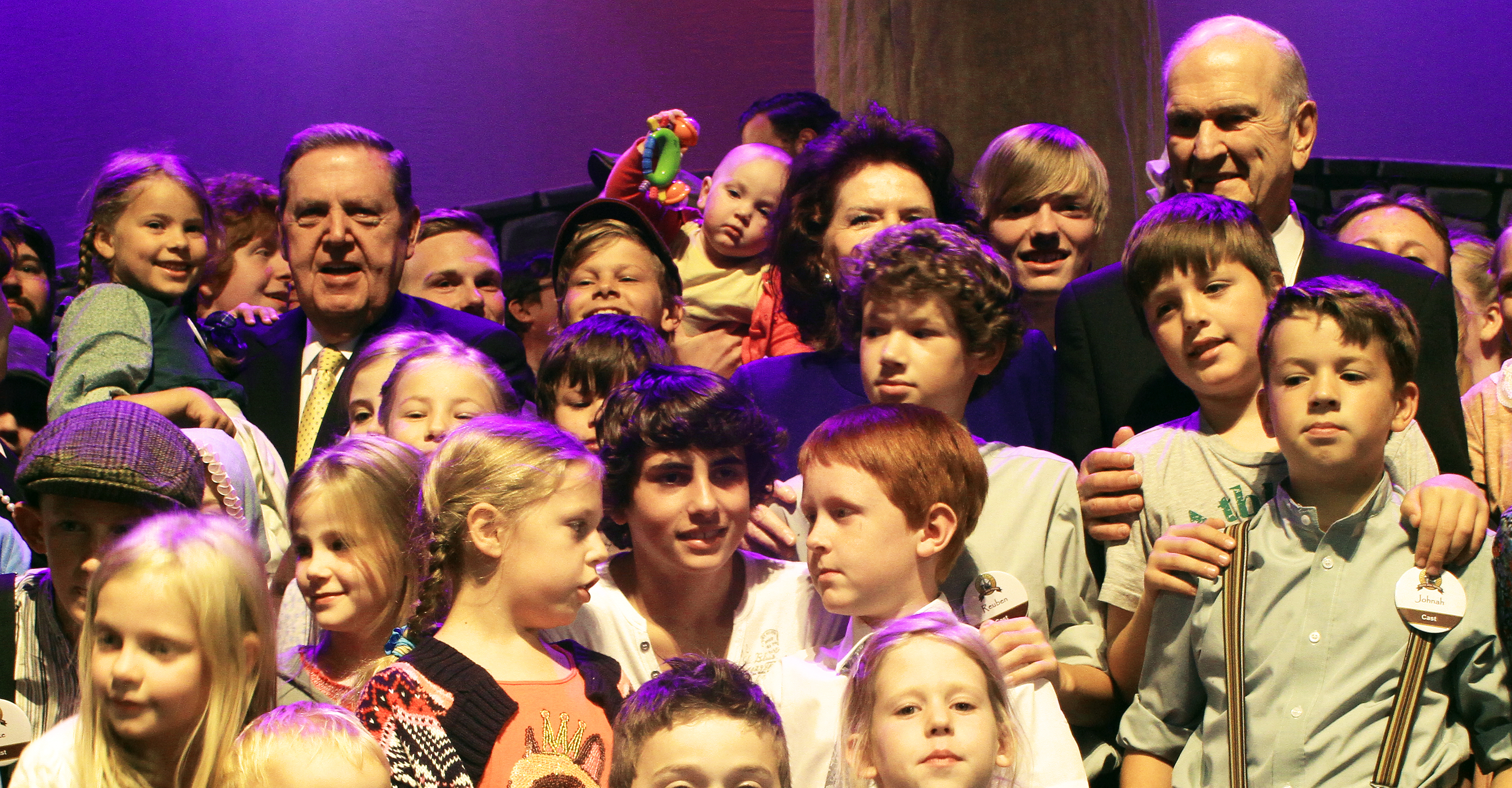 Elder Jeffrey R. Holland and Elder and Sister Nelson pose with children who participated in the British Pageant. Photo by David MW Pickup.

During 10 performances, some 17,000 viewed the British Pageant. Reports have been streaming in that people are being taught by the missionaries after seeing the pageant, members have returned to activity, and, thus far, the missions in the United Kingdom had reported more than 60 self-referrals arising directly from the pageant.

Speaking immediately prior to the final performance on August 10, Elder Kerr, a former Area Seventy, spoke of the pageant’s legacy: “People are rediscovering and remembering why they love the Church. There is a fire in the hearts of those that love this Church. You’ve created this, and we can take it back to our wards and stakes.”

He observed that some 1,000 individuals had contributed to the pageant. “I believe the Lord has prepared these people to do what they are doing. You didn’t know why you signed up for this, but now you do. You will be special people.”