Church Expresses Concern, Love for Those in Japan 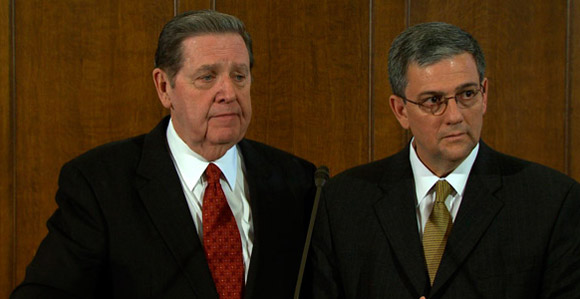 During Tuesday’s press conference, Elder Jeffrey R. Holland of the Quorum of the Twelve Apostles and Elder David F. Evans of the Seventy, expressed concern for and confidence in the people of Japan.

—Elder Jeffrey R. Holland of the Quorum of the Twelve Apostles

On Tuesday afternoon Elder Jeffrey R. Holland of the Quorum of the Twelve Apostles expressed sympathy and support on behalf of the Church for all of the people in Japan following last week’s earthquake and tsunami and the ensuing concerns over radiation.

“Our concern and our prayers, our anxiety and our hopes, our confidence is for all the people of Japan, whether they’re Latter-day Saints or not,” Elder Holland emphasized. “Our prayers are being offered in behalf of them, and substantial financial help has already been committed to the nation and to the people, regardless of their religious affiliation. … More will be forthcoming as needed.”

During the press conference, Elder Holland updated the status of missionaries and members in Japan and expressed gratitude for local leaders’ efforts to contact them.

All missionaries are safe and accounted for. All members, except for those in three units in the devastated area of Sendai, have been contacted. No injuries or deaths have been reported among the membership so far.

Elder David F. Evans of the Seventy, an assistant executive director of the Missionary Department, prior president of the Japan Nagoya Mission (1998–2001), and a former member of the Asia North Area Presidency, recounted the elation that was felt as the last two missing missionaries found their way to an evacuation center and were reported safe at about 3:00 a.m. MST on Saturday: “There was great joy—both in leaders in Japan and here—as we were finally able to report that every missionary was safe and accounted for,” he said.

Missionaries in Sendai and Tokyo are being relocated to the north and south regions of Japan, where they will be absorbed into the other existing missions for the time being.

“I can tell you right now that one of the responses from the missionaries of the Sendai area will be that they will not want to leave,” Elder Holland said. “They will be determined if we would allow them, which we won’t, to stay and stand by the people they love—the people of their branches and wards.”

Local Church leaders are acting on their concerns for missionaries, members, and the people of Japan at large to provide relief.

Initial visual assessment of Church buildings in Japan shows about half of the meetinghouses in the affected area are damaged. Those that are stable will be considered for use as places of food preparation, distribution, or shelter, as needed.

“I cannot say enough about the leaders who have worked through the day and through the night—now going on several days and several nights—without sleep to care for the people locally,” Elder Holland said. “A remarkable, humane, Christian response has already been made and a lot of that is already on site.”

The communication and transportation situation makes it nearly impossible for any organization to reach the affected areas right now, although the government of Japan has some limited access. Church welfare and humanitarian aid teams are working with the local government and other organizations to assess needs and assist in recovery and relief efforts.

“Our feeling is of great sympathy and concern and a great expression of support, but we are not panicking,” Elder Holland said.

For more information or to view the press conference, go to newsroom.ChurchofJesusChrist.org.