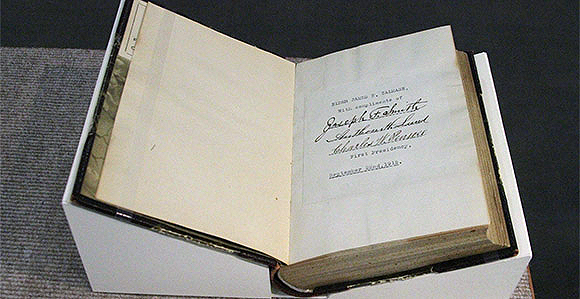 A first edition printing of Jesus the Christ presented by the First Presidency to author James E. Talmage contains their inscription to him.

“It has to be, by my estimation, if you don’t count the LDS scriptures, the top best seller of a Church book in history.” —Richard Neitzel Holzapfel, professor of Church history and doctrine

It is the only book in Church literature to have been written in longhand in a temple, directly commissioned by the First Presidency. Today, 100 years after its publication, Jesus the Christ by James E. Talmage is still in wide use by Latter-day Saints and is what scholars reckon to be the best-selling doctrinal work in Church history.

Frequently quoted by Church leaders, writers, speakers, and teachers, it has served at least twice as an instructional manual in Church classes. Over the decades, it has had a place among the very few books in the “reference library” that Church missionaries are allowed and encouraged to carry with them as they are transferred from place to place within their missions.

The publication a century ago has been and is being observed in a number of ways this year:

At the Church History Library in Salt Lake City, a new temporary exhibit regarding Jesus the Christ is now on display, featuring pages from the original handwritten manuscript, outlines from the lectures on which the book is based, a first-edition copy of the book, a 1963 edition, and some foreign-language editions.

An exhibit this month in the Special Collections section of the Harold B. Lee Library at Brigham Young University displays documents pertaining to the writing and publication of Jesus the Christ. The free exhibit will remain open through September.

The recently concluded Education Week at BYU featured a five-day series of lectures on the book given by Richard Neitzel Holzapfel, professor of Church history and doctrine, and Thomas A. Wayment, professor of ancient scripture.

Included in the BYU exhibit is the July 18, 1905, letter to Brother Talmage from President Joseph F. Smith and his counselors in the First Presidency, President John R. Winder and Anthon H. Lund. It reads: “Dear Brother: We should be pleased to have you print and publish in book form the course of lectures being delivered by you before the University Sunday School on the subject, Jesus the Christ, believing that they will prove a valuable acquisition to our Church literature and that the proposed work should be placed within the reach of Church members and general readers.” 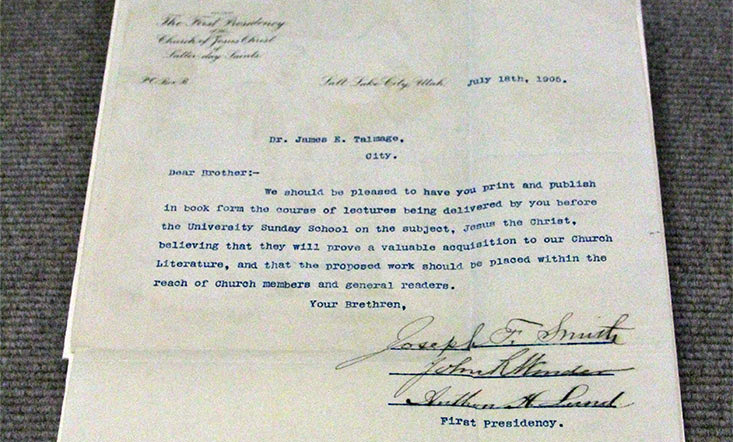 Letter from the First Presidency written in 1905 commissions James E. Talmage to develop his lecture outlines into what would become the classic work Jesus the Christ. Photo by R. Scott Lloyd.

The assignment came to Brother Talmage some six years before he was called to the Quorum of the Twelve Apostles in December 1911; the bulk of the work would be completed during his apostolic ministry.

A teacher and principal at Church schools, Brother Talmage, by 1900, had distinguished himself as a scientist, educator, and author. President of the University of Deseret (now the University of Utah), he left that position in 1897 to be a geological and mining consultant but continued on as a professor of geology at the university until 1907.

While serving as a college administrator, he fulfilled requests from the First Presidency, first to deliver a series of lectures on the doctrines of the Church, which he later developed into his well-known book The Articles of Faith, and later on the life of Christ, which formed the nucleus of Jesus the Christ, as alluded to in the above-quoted letter from the First Presidency.

“So, from 1904 to 1906, he effectively creates an outline for each and every chapter of the book,” Brother Wayment recounted in a Church News interview.

Pressure from other matters largely hindered him from getting to the task right away, Brother Holzapfel said in the interview. For one thing, someone had covertly taken photographs of the interior of the Salt Lake Temple and threatened to publish them unless the Church paid him money. To preclude the blackmail attempt, the First Presidency determined that the Church itself should publish its own book containing professionally made photographs of the rooms in the temple. Brother Talmage was commissioned to write the text for the book, which is today well known under the title House of the Lord.

“So a lot of immediate concerns got in the way of his finally writing Jesus the Christ,” Brother Holzapfel said. But at the urging of the Brethren, he began in earnest in 1914, three years after his call to the Twelve.

In a journal entry of September 14, 1914, Elder Talmage recorded: “Experience demonstrated that neither in my comfortable office nor in the convenient study room at home can I be free from visits and telephone calls. In consequence of this condition, and in view of the importance of the work, I have been directed to occupy a room in the [Salt Lake] Temple where I will be free from interruption. I began work in the Temple today and hope that I shall be able to devote the necessary time thereto.” 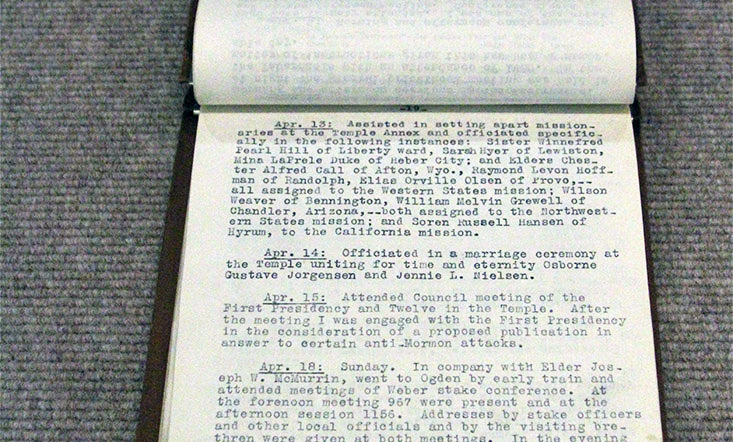 The April 19, 1915, entry in the journal of Elder James E. Talmage records his completion of the manuscript of Jesus the Christ, his working on it in the Salt Lake Temple, and his intention “to proceed with the work of revision without delay.” Photo by R. Scott Lloyd.

Because of the sacred setting, and perhaps because of the direct commission from the First Presidency, some have tended to assume incorrectly that Elder Talmage wrote the book under direct revelation. Though he wrote of feeling the spirit of the temple, it seems it was mainly for him a place of refuge from other pressures, freeing him to devote his full attention to the work, a scholarly treatise on the ministry of the Lord, informed by latter-day scripture and doctrine.

For the book—and for the lectures from which it was developed—he drew upon the work of prominent biblical scholars of the day, including Frederic W. Farrar, Cunningham Geikie, Alfred Edersheim, Charles F. Deems, and Samuel J. Andrews. Some of those works are on display at the BYU library exhibit, showing the similarity in format and scholarly style between their books and Elder Talmage’s work. 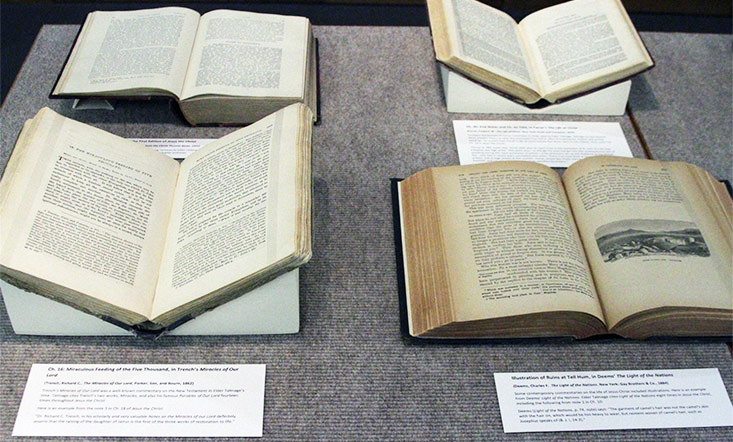 Copies of scholarly works which James E. Talmage drew upon in his writing of Jesus the Christ is on display in the exhibited being featured at the Harold B. Lee Library at BYU. Photo by R. Scott Lloyd.

“In addition to both the Old and New Testaments, Elder Talmage quoted from the scriptures of the Restoration,” Professors Holzapfel and Wayment wrote in the introduction to their study guide. “He noted this significant aspect of his work, something that separated his book from other studies about the life of Jesus Christ, saying, ‘A characteristic feature of the work is the guidance afforded by modern scripture and the explication of the Holy Writ of olden times in the light of present day revelation, which, as a powerful and well directed beam, illumines many dark passages of ancient construction.'”

Thus, while it had been common for narratives on the life of Christ to begin with the Annunciation of His birth and end with His Ascension, Elder Talmage in effect, said, “We can do better than that,” Brother Holzapfel commented. “He goes to the beginning of time, with Jesus as Jehovah, the great I Am, and goes beyond His Ascension to His visit among the Nephites and Lamanites, the Restoration and His appearances to Joseph Smith, through the Second Coming, and then the final winding up scene.

“So he basically takes the standard narratives that are being published in English and goes back in time and forward in time using the Restoration as his window.”

As the work progressed, Elder Talmage read completed portions to his Brethren in the leadership of the Church and received and incorporated their feedback, Brother Holzapfel said.

True to the expectation the First Presidency expressed in their letter of assignment to Elder Talmage, the book has proved “a valuable acquisition to our Church literature” whose worth endures to this day.

“It goes through a series of editions and just sells like hotcakes,” Brother Holzapfel said, including use as a manual for priesthood courses of study early on and then later in the 1960s.

Because the book has long been in the public domain, it is impossible to gauge its sales “because there are so many publishers using it besides the Church,” he said. “It has to be, by my estimation, if you don’t count the LDS scriptures, the top best seller of a Church book in history,” Brother Holzapfel said in the interview. 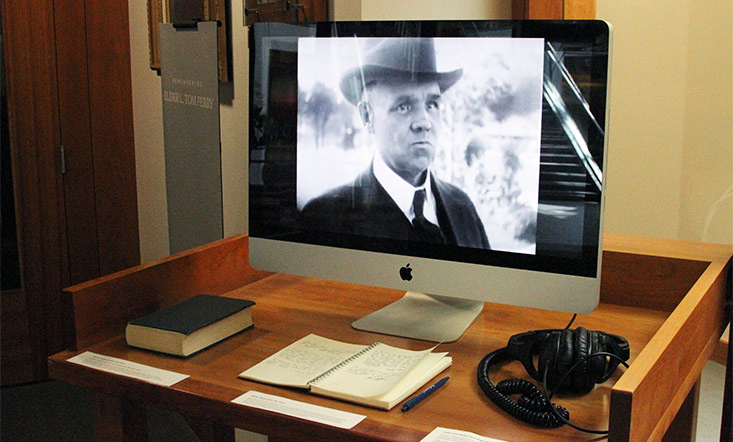 Feature in exhibit at Harold B. Lee Library at BYU shows motion picture footage of Elder James E. Talmage, allows the listening through headphones of one of his lectures, and invites visitors to write their impression of his book “Jesus the Christ.” Photo by R. Scott Lloyd.

Does it have the relevance today it once did?

“In my generation and earlier in the Church, if you really spent time studying the life of Christ, this is probably where you started,” Brother Holzapfel said. “I think the current generation has shifted a little bit from previous generations in which Jesus the Christ was the first book, the touchstone. It’s probably because we have so many other great books that are focused on Jesus’s life and ministry.”

He compares it to the Bible Dictionary in the current edition of the LDS scriptures that purports to be “subject to reevaluation as new revelation or research comes to light.”

In their study guide, the authors have a heading in each chapter, “Since 1915,” giving updates to the respective chapters in Jesus the Christ.

“Think about it: the Dead Sea Scrolls were discovered in 1947; that changes our whole view of 1st-century Judaism,” Brother Holzapfel said. Older New Testament manuscripts have been discovered. President Joseph F. Smith received his vision of the redemption of the dead in 1918 (see Doctrine and Covenants 138). And the Prophet Joseph Smith’s inspired translation of the Bible is accessible to Latter-day Saints today in a way that was not possible when Elder Talmage wrote Jesus the Christ.

Still, the book is a classic, Brother Holzapfel said. “It is the testimony of an Apostle, and that powerful voice can be read and can uplift, inspire, and bring you into the world of Jesus’s ministry. That’s what its purpose is.”

The original manuscript of the book, written in longhand in pencil, is preserved in the archives of the Church, and pages from it are displayed in the current exhibit at the Church History Library.

The printer’s manuscript, typewritten, was found about 15 years ago and is now in the possession of LDS collector Brent F. Ashworth. He purchased it after learning it had been found in a box just after the death of John R. Talmage, Elder Talmage’s last living child.

Displaying the printer’s manuscript, Brother Ashworth pointed out what Brother Holzapfel and Brother Wayment both noted: that Elder Talmage was making copious amendments and additions right up to the moment of the book’s first printing. If he were alive today, the author would likely see the need for a revision, Brother Holzapfel surmised.

Brother Ashworth prizes the printer’s manuscript and said he will eventually donate it to the Church. His words express what many Church members have felt over the past hundred years: “I love this book; I think it’s a great book. To me, it has helped explain the Savior’s life about as well as anything outside the scriptures themselves.” 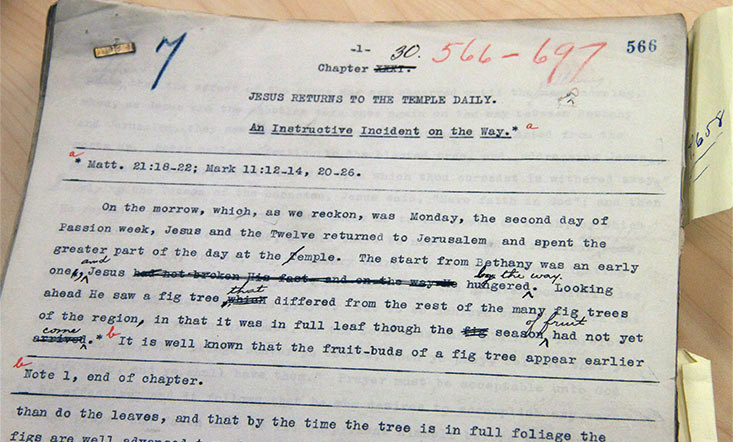 Printer’s manuscript of “Jesus the Christ,” in possession of collector Brent F. Ashworth, reflects author James E. Talmage’s attention to detail even up to the moment the book was going to press. Photo by R. Scott Lloyd.