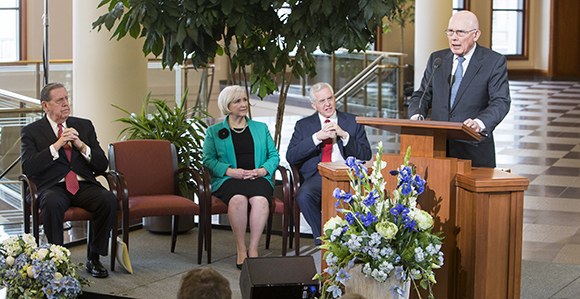 Elder Dallin H. Oaks of the Quorum of the Twelve Apostles speaks at a news conference Tuesday, January 27, 2015, inside the Conference Center in Salt Lake City as LDS leaders reemphasize support for LGBT nondiscrimination laws that protect religious freedoms.

“We urgently need laws that protect faith communities and individuals against discrimination and retaliation for claiming the core rights of free expression and religious practice that are at the heart of our identity as a nation and our legacy as citizens.” —Elder Dallin H. Oaks of the Quorum of the Twelve

Church leaders shared their concerns about the “increasing tensions and polarization” between advocates of religious freedom and advocates of gay rights during a press conference on January 27.

While the Church leaders addressed the American public, they also spoke to the 15 million Church members worldwide—many of whom wrestle “with the same issues we face here in the United States.”

“To those who follow the Church closely and who are familiar with its teachings and positions on various social issues, it will be apparent that we are announcing no change in doctrine or Church teachings today,” said Elder Christofferson. “But we are suggesting a way forward in which those with different views on these complex issues can together seek for solutions that will be fair to everyone.”

Elder Christofferson said although the Church has many daily interactions with news media, Church leaders don’t hold news conferences very often—“perhaps every year or two when we have a major announcement to make or something significant to say. And today, we do have something to say.”

Speaking first, Sister Marriott said the nation is engaged in a great debate about marriage, family, individual conscience and collective rights, and the place of religious freedom in society. “The eventual outcome of this debate will influence to a large extent whether millions of people with diverse backgrounds and different views and values will live together in relative harmony for the foreseeable future,” she said.

In any democratic society, differences often lead to tensions, Sister Marriott added. “Such tensions are not to be feared unless they become so extreme that they threaten to tear apart the very fabric of the society. …

“The debate we speak of today is about how to affirm rights for some without taking away from the rights of others. On one side of the debate we have advocates of LGBT (lesbian, gay, bisexual, and transgender) rights. This movement arose after centuries of ridicule, persecution, and even violence against homosexuals. Ultimately, most of society recognized that such treatment was simply wrong and that such basic human rights as securing a job or a place to live should not depend on a person’s sexual orientation.”

She said the Church believes that sexual relations other than between a man and a woman who are married are contrary to the laws of God. “This doctrine and commandment comes from sacred scripture and we are not at liberty to change it. But God is loving and merciful. His heart reaches out to all of His children equally, and He expects us to treat each other with love and fairness.”

It's for this reason that the Church has publicly favored laws and ordinances that protect LGBT people from discrimination in housing and employment, she said.

However, said Elder Oaks, those who seek the free exercise of their religion are seeing a steady erosion of treasured freedoms that are guaranteed in the United States Constitution.

“Accusations of bigotry toward people simply because they are motivated by their religious faith and conscience have a chilling effect on freedom of speech and public debate,” said Elder Oaks. “When religious people are publicly intimidated, retaliated against, forced from employment, or made to suffer personal loss because they have raised their voice in the public square, donated to a cause, or participated in an election, our democracy is the loser.”

Such tactics are every bit as wrong as denying access to employment, housing, or public services because of race or gender, he said.

“Today, state legislatures across the nation are being asked to strengthen laws related to LGBT issues in the interest of ensuring fair access to housing and employment,” he said. “The leadership of The Church of Jesus Christ of Latter-day Saints is on record as favoring such measures. At the same time, we urgently need laws that protect faith communities and individuals against discrimination and retaliation for claiming the core rights of free expression and religious practice that are at the heart of our identity as a nation and our legacy as citizens.”

Elder Oaks said the Church asserts the following principles based on the teachings of Jesus Christ and on fairness for all, including people of faith:

1. “We claim for everyone the God-given and constitutional right to live their faith according to the dictates of their own conscience, without harming the health or safety of others.”

2. “We acknowledge that the same freedom of conscience must apply to men and women everywhere to follow the religious faith of their choice, or none at all if they so choose.”

3. “We believe laws ought to be framed to achieve a balance in protecting the freedoms of all people while respecting those with differing values.”

4. “We reject persecution and retaliation of any kind, including persecution based on race, ethnicity, religious belief, economic circumstances, or differences in gender or sexual orientation.”

Elder Oaks concluded: “We call on local, state, and the federal government to serve all of their people by passing legislation that protects vital religious freedoms for individuals, families, churches, and other faith groups while also protecting the rights of our LGBT citizens in such  areas as housing, employment, and public accommodation in hotels, restaurants, and transportation—protections which are not available in many parts of the country.”

Elder Holland said accommodating the rights of all people—including their religious rights—requires wisdom and judgment, compassion, and fairness. “These are serious issues, and they require serious minds engaged in thoughtful, courteous discourse.”

Elder Holland said the discussion includes the “constitutionally guaranteed right of religious communities to function according to the dictates of their faith,” such as their right to teach their beliefs from the pulpit and in church classrooms, share their views openly in the public square, select their own leaders, and minister to their members freely. They include the right to use church properties in accordance with their beliefs. Religious rights must include a family’s right to worship and conduct religious activities in the home, he said.

In addition to institutional protections, individual people of faith must maintain their constitutional rights, he added. “With understanding and goodwill, including some give and take, none of these rights guaranteed to people of faith will encroach on the rights of gay men and women who wish to live their lives according to their own rights and principles.”

Elder Holland closed by referencing the Church’s 1835 statement, now found in the Doctrine and Covenants 134.

“The text of that scripture asserts both elements of the position we are taking today,” said Elder Holland. “First, that all of us are accountable to God for the responsible exercise of our religious beliefs, and we are calling for all Latter-day Saints to be responsible in exercising their religious freedom. Secondly, that scripture sets out the proper role of government in protecting the public interest without encroaching on free exercise, what it calls ‘the freedom of the soul.’

“Some 180 years later, the determination of The Church of Jesus Christ of Latter-day Saints to be responsible citizens while also defending religious liberty remains undiminished.”