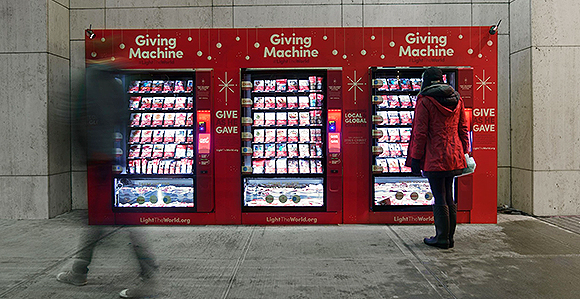 “This unique way to give not only blesses the life of the giver but also lifts the receiver in locations all around the world. Our hope is to offer opportunities to light the world one by one.” —Brent H. Nielson, General Authority Seventy

For the third year in a row, the large, bright-red Giving Machines will be part of the #LighttheWorld campaign for The Church of Jesus Christ of Latter-day Saints.

And this year the Giving Machines will be found in 10 locations across the world.

Elder Brent H. Nielson, a General Authority Seventy, said, “This unique way to give not only blesses the life of the giver but also lifts the receiver in locations all around the world. Our hope is to offer opportunities to light the world one by one.”

According to Newsroom, the Giving Machines will be open to the public in the following locations:

The Giving Machines offer items such as food, clothing, livestock, hygiene supplies, medicine, and sporting equipment, ranging in price from $2 to $320. This year, users will be able to purchase multiple items with one swipe of a credit card.

“These Giving Machines are an example of the big things that can happen when many people give just a little,” said Sister Bonnie H. Cordon, Young Women General President. “That is what it means to light the world one by one—when we each give what we can offer, our little light adds to a brightness of hope.”

Partner charities for 2019 include UNICEF, Church World Service, International Medical Corps, WaterAid, and Water For People, and 100 percent of all donations will go directly to them.

The Giving Machines were first made public in 2017 and were housed in the lobby of the Joseph Smith Memorial Building in downtown Salt Lake City. In 2018, the Giving Machines expanded to four other locations, including Gilbert, Arizona; New York City; London, England; and Manila, Philippines.

The Giving Machines raised more than $2.3 million in 2018. Total donations for 2019 will be available on LighttheWorld.org and will be continuously updated throughout the season.

The #LighttheWorld campaign began in 2016 and encourages people to perform instant acts of service that make a difference during the 25 days leading up to Christmas.

This video shows highlights of the 2019 #LighttheWorld effort, which includes ways people can change lives through sharing their faith, love, care, and service.