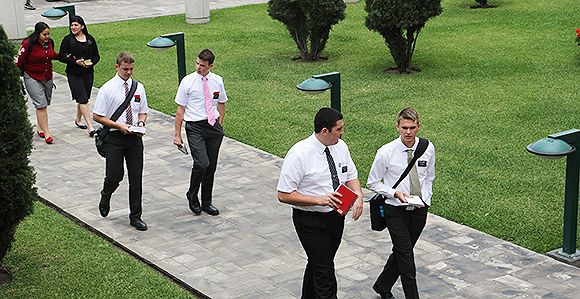 Missionaries for The Church of Jesus Christ of Latter-day Saints walk across the grounds of the Peru Missionary Training Center on October 19, 2018. The Church announced January 2 that it is creating four new missions and dissolving 12 existing missions, effective July 1, 2019. With these changes, there will be 399 missions worldwide. Photo by Sarah Jane Weaver.

Four newly created missions have been announced by The Church of Jesus Christ of Latter-day Saints, with 12 existing missions being dissolved into neighboring missions.

These changes will take place July 1, at which time the Church will have a total of 399 missions worldwide.

The new missions are:

The 12 existing missions to be folded into neighboring missions—including seven in the United States—are:

The mission changes were announced in a Wednesday, January 2, Newsroom statement, which noted a leveling off in the number of full-time missionaries since the 2012 age-change announcement. The number reached 88,000 at its height and has dropped since to today’s 65,000.