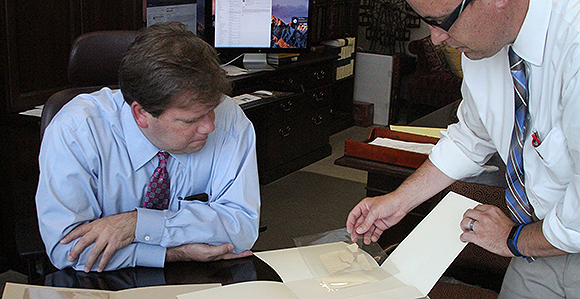 Reid Neilson, left, assistant Church historian and recorder, and Robin Scott Jensen, associate managing historian and project archivist for the Joseph Smith Papers Project, go over portions of the original manuscript of the Book of Mormon that have been in the possession of the Church History Department.

“These leaves and fragments are tangible reminders of Joseph’s encounter with the divine and with the sacred texts.” —Reid L. Neilson, assistant Church historian and recorder

The Book of Mormon printer’s manuscript has been published virtually in its entirety, but what LDS historians consider the “crown jewel” of the book’s origin—the original manuscript handwritten as Joseph Smith dictated to scribes his translation of the Nephite record preserved on gold plates—exists only in fragmentary form.

Now, the Church History Department of the Church has announced the acquisition within the past two months of yet more fragments from that priceless document.

These will be combined with the approximately 28 percent of the manuscript in the department’s possession for publication within the next three or four years as part of the Joseph Smith Papers Project, according to department officials. Photographic images of the existing pages or fragments will be published in the forthcoming volume with a typescript copy of the content of each page presented on the facing page in the book.

Thus, part of the manuscript, beginning with 1 Nephi is fairly well preserved, Jensen said, as he displayed extant portions that were already in the Church’s possession.

“By the time we get to Alma, it is just falling apart,” he said. “There are very few full leaves, and when they are full, they’re really worn away.”

After the manuscript was taken from the cornerstone, it remained in the possession of Lewis Bidamon, who had married Joseph Smith’s widow, Emma.

“Members of the Church, when they went on missions, often stopped in the Midwest to visit Church history sites,” Jensen said. “If they went to visit Lewis Bidamon, they would get a keepsake: a fragment of the original Book of Mormon manuscript.”

Neilson said missionaries were encouraged to go back to Nauvoo and ask for pieces of the manuscript. “The Church leaders couldn’t ask for it wholesale, but if they sent people back in a steady stream, they could get little pieces here and there.”

In that manner, the Church ended up with approximately 28 percent of the manuscript.

In the 1880s, Elder Franklin D. Richards of the Quorum of the Twelve Apostles acquired several leaves of the manuscript, Jensen said.

These were handed down to his son who, while living in the Hotel Utah in Salt Lake City in the 1940s, had them on display in his hotel room. He showed them to a housekeeper named Ada Cheney.

As she was viewing the manuscript portion, a page of it fell on the floor, Jensen recounted. “She reached down and picked it up. Brother Richards told her to keep it as a memento.

“She was eternally grateful and kept it. Then she divvied it up and handed it out to her children. So this one page slowly became multiple fragments that were passed out to children and ultimately grandchildren.”

In the mid-1990s, Royal Skousen, a scholar of the Book of Mormon manuscript text, contacted the Cheney descendants and acquired photographs of several of their fragments of the manuscript.

Later, within the last year, while in the process of multi-spectral imaging its own portion of the manuscript, the Church History Department reached out to the Cheney family to see if they would make some of their fragments available to the department.

“They were very gracious about doing that,” Jensen said.

The upcoming volume and the previously published typographical facsimile of the printer’s manuscript “will be used by scholars who are interested in the textual history of the Book of Mormon,” Jensen noted.

“What I really find exciting,” Neilson said, “is that we have already published the printer’s manuscript, but now we’re able to go back and do this painstaking work. It’s a very different kind of work than on the printer’s manuscript. We’re actually reconstructing and showing the limits of what we have and what we don’t have. I think it’s a tribute to the whole Book of Mormon text and Joseph Smith’s translation work that such care is actually going into reproducing even fragments. It’s unlike anything we’ve done.”

Jensen added, “It wouldn’t be an overstatement to say that the Book of Mormon is the crown jewel of Joseph Smith’s mission. It’s ultimately what brought people into the Church. It’s what convinced people to join. Joseph Smith and other members of the Church saw it as God communicating with His children.

“So to be able to present this manuscript to scholars and to members of the Church is really a remarkable responsibility, and it’s great that we here on the Joseph Smith Papers Project can make that available.”

Jensen showed newly acquired fragments obtained from the Cheney descendants, one of which was so tiny it reproduced only a single word, “strengthen.” He said they are from a portion of the manuscript that today is published as Alma 60:5–7, 11, 15–16, and 19.

They are in the handwriting of Oliver Cowdery, the main scribe of a number who assisted Joseph Smith with the translation.

On a laptop computer, Jensen displayed multi-spectral images that had been made of the fragments. In those images, the writing fairly jumped off the paper when compared to the original fragments on which the ink was faint and, in some portions, virtually unreadable.

“Some might look at this and say, ‘So what? These are tiny fragments. They don’t ultimately mean much. We have the published Book of Mormon. Why would we worry about the original manuscript itself?’

“I would say that Latter-day Saints feel such a close connection to the Book of Mormon. We study it constantly; we’re counseled to read it. And the original manuscript itself is, historically speaking, the closest we can get to that original translation, the process that Joseph Smith said transpired ‘by the gift and power of God.’ Well, this is the very first physical iteration of that gift and power of God.”

The more Church members can understand, study, and value the manuscript, the better they can understand that sacred process, Jensen remarked.

He compared it to the Bible, saying that to have an original manuscript of one of Paul’s epistles would revolutionize biblical scholarship.

“To think that we have that for the Book of Mormon, this text that brought about this world religion, is remarkable, he said. “It really is a testament to not only how Joseph Smith and Oliver Cowdery and others who originally created it treated the manuscript, but how it was revered later by members of the Church and others who later came to Nauvoo and gathered it up. Sister Cheney kept these pages because she found great spiritual value in them.”

Neilson said that when he displays portions of the original manuscript to library visitors, he reminds them, “This is as close as you’ll ever get to the gold plates.”

He added, “These leaves and fragments are tangible reminders of Joseph’s encounter with the divine and with the sacred texts.”

Jensen emphasized that the scholars working with the Joseph Smith Papers Project are eager to present their best effort “so that other scholars can rely on our efforts for their own scholarship.” Thus, the scholarship is disseminated into other works, including Church-themed products.

Neilson commented, “When I see fragments of the original Book of Mormon manuscript, I’m reminded that it takes heavenly help and mortal messengers to bring the divine down to earth. This is a collaborative effort … in this case a collaboration between an angel and a fairly young man. It’s a reminder of the marvel that so many early Latter-day Saints discovered and celebrated, that the divine still is present in our lives. … It’s the intersection of the sacred and the profane, the worldly and the spiritual, the divine and the human.” 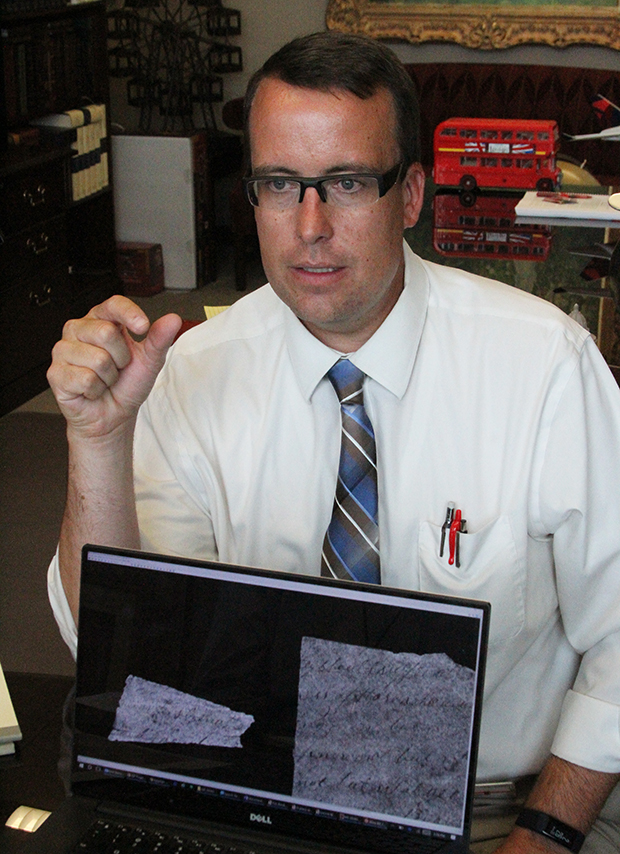