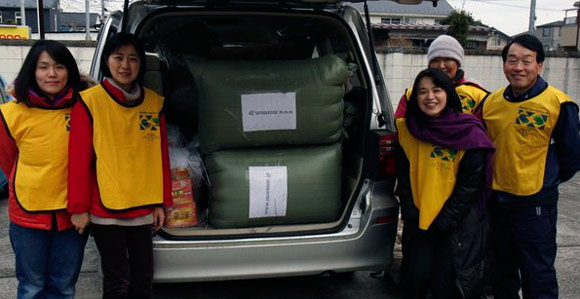 “We received relief aid from not only the Church, but from people from all over the world. I hope to try and pay them back by staying on the Lord’s path to the end.” —Michie Okada

Since that day, more than 15,500 people have been confirmed dead and 8,000 are still missing across northern Japan. Aid in the form of blankets, food, water, gasoline, and other necessities continues to flow to the area, but the severity of the devastation is still significant.

Those desiring to help may contribute through the humanitarian fund.

In a recent visit to the country, Presiding Bishop H. David Burton said, ““I’m not sure I can adequately describe [the destruction]. Though I’ve seen hundreds of pictures . . . setting foot on the ground has been an experience I probably will never forget.”

Below is a chronological report of the Church’s involvement since the disaster occurred. Read translations of members’ experiences and testimonies following the disaster by clicking on links embedded in the timeline.

Following Church welfare protocol, the Church established the Disaster Support System under the direction of the Area Presidency.

Safety check of Church members continued. Safety of all missionaries is confirmed.

Read two missionary companionships’ accounts during and after the disaster:

Missionary Work in the Midst of Disaster

An Area Seventy, the area welfare manager, and a chief officer in physical facilities, arrived at the affected area and set up the Field Office of Disaster Assistance in the Kamisugi Ward.

The Kamisugi Ward in Sendai received the first relief aid from Osaka.

Relief aid from Osaka area was delivered to Koriyama and Fukushima.

The First Presidency and the Quorum of the Twelve Apostles announced the move of missionaries from affected areas to other missions.

Members came together for a Helping Hands activity: cleaning up the area affected by liquefaction in Urayasu, Chiba—an ongoing project.

Sendai and Tokyo missionaries were transferred to other mission areas.

Read a member’s account, “Loved and Blessed by the Lord.”

Read about “The Scooter Miracle.”

More than 200 gallons (800 liters) of gasoline was delivered to Ichinoseki Branch from Sapporo.

Read the account of a member from Ichinoseki, "Following the Still Small Voice.”

Read “From the Temple to Transporting Relief.”

The first group (four people) of volunteers coordinated by the Church arrived at the affected area from Tokyo.

Blankets from the Nagamachi and Kamisugi Wards were carried to Sendai.

Relief aid from Kobe, Osaka, and Nagoya were delivered to Sendai.

Mopeds donated from Nagoya were delivered by request of the affected area.

LDS Disaster Counter Measures office was set up on the first floor of the Church administration office in Tokyo. (It has since been dissolved.)

LDS Volunteer Centers established in Miyako, Ichinoseki, Furukawa, Sendai, and Koriyama. Volunteers throughout the country were accepted for reconstruction support and attentive listening.

Members throughout the country fasted and prayed upon invitation from the Area Presidency.

Church began placing couple missionaries in Koriyama, Ichinoseki, Miyako, and Sendai, and continued with safety checks and support for members.

Japanese vocal ensemble, bless4, composed of the four brothers and sisters of the Kawamitsu family, put on a concert at Onagawa Daini elementary school and promised to donate flower bulbs and nursery plants to the Onagawa education board.

Hygiene kits were loaded onto a truck and sent to Sendai.

Hygiene kits were delivered to other affected areas.