Contributed By Elder Joseph Sitati of the Seventy 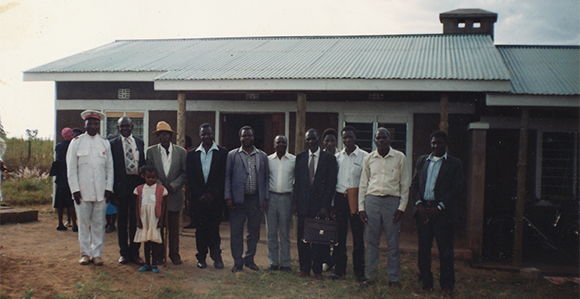 Elder Joseph W. Sitati and his family built a house in western Kenya so they would have a place to stay when they traveled from Nairobi every Christmas. One year, over 100 members of another church visited them at the house, leading many people in the area to accept the restored gospel of Jesus Christ.

As in all majority Christian nations of Africa, Christmas in Kenya is a time of celebration, rejoicing, and reconnecting with family. Almost everyone, irrespective of faith or religious belief, puts aside the cares of career and work and travels “upcountry” to be with loved ones. The big cities and towns have a ghost feeling as a temporary migration takes place for about 10 days—from a day before Christmas to the second day of the new year.

During this time, extended family bonds are reestablished in get-togethers planned for that purpose. More weddings take place in December than in any other month of the year. For those who follow traditional cultural practices, it is a time when most rites of passage are observed and young people are ushered into adulthood.

The Western traditions of lights, exchanging gifts, and the benevolent acts of Father Christmas are taking root slowly among the rising generation but are not typical features of Christmas celebrations, especially in the rural areas where most of the people live and spend the Christmas vacation.

In December 1992, our young family traveled from Nairobi to be with our extended family near the small town of Kitale in western Kenya at Christmastime. Such annual visits to our rural roots made it necessary for our family to have a place to stay during that time. Our needs were not unlike those of families in North America who build log cabins in the mountains for their summer family retreat. So for four years, we had been building a house to meet our needs, and we were going to occupy it for the first time.

My father was the pastor of the local congregation of the Quaker Church, which was a short distance from our house. They usually held meetings on Christmas Day. On that day, I asked my younger brother who had visited us that morning to invite him, together with the leaders of his congregation, to come over to the house for refreshments after their Christmas service, to commemorate our occupation of our new rural house.

My brother may not have heard me properly and so proceeded to tell my father that the whole congregation was invited. We were a bit taken aback to see over 100 people come to our house a few hours later! Not wishing to cause alarm, we welcomed them and ushered them to find seating around the house, as there was no way to accommodate them all inside.

I said a quiet prayer seeking the Lord’s help, and then for about two hours on that Christmas Day, we frantically did everything we could to serve that congregation with drinks and bread that we mercifully found in a few nearby local shops which were open.

After the refreshments, Dad spoke to the people about the new church we had joined in Nairobi and the positive influence he had observed on our family. He asked me to tell the congregation more about it. I bore my testimony about the Restoration of the true Church and of its official establishment in our country the previous year, and that it had units only in Nairobi at that time. I told them about the sealing of our family in the temple the previous December, which had united us eternally. Many had not heard about the Church before and found the things I shared about the restored Church quite intriguing. Many questions were asked and answered.

As the last of the people left, having eaten to their fill and heard about the Church, we considered what an unexpected blessing it had been on this Christmas Day for the Lord to provide this opportunity for all of our family to serve people, many of whom we did not know, and to share with them our testimony of the restored Church.

Today, there is a branch of the Church only seven miles away from where that meeting took place. Among members of that branch are some of our unexpected guests, who later found the restored gospel because they had heard about it. Two of our children who were in their early teens at the time now live in that community with their families. They are members of the branch and are grateful for friends in the Church whom they first met when the Lord provided a choice opportunity to serve them on that Christmas in 1992.