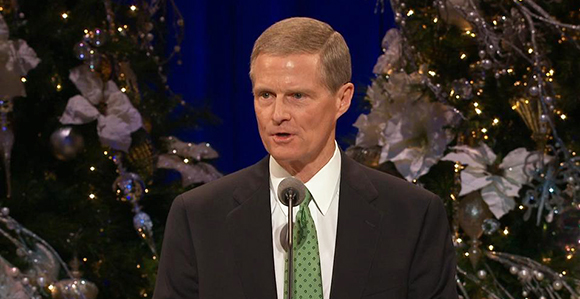 Elder David A. Bednar of the Quorum of the Twelve Apostles addresses a Conference Center audience during the First Presidency's Christmas Devotional, December 6, 2015.

“In every season of our lives, in all of the circumstances we may encounter, and in each challenge we may face, Jesus Christ is the light that dispels fear, provides assurance and direction, and engenders enduring peace and joy.” —Elder David A. Bednar of the Quorum of the Twelve

In his message Sunday evening, Elder David A. Bednar of the Quorum of the Twelve Apostles highlighted the important additional details the Book of Mormon gives of the Savior’s birth.

As he began his remarks during the annual First Presidency’s Christmas Devotional, Elder Bednar invited individuals to not only listen to his words, but to “visualize yourself in these events,” he said. “I pray the Holy Ghost will help you liken these scriptures to you and your family (see 1 Nephi 19:23) and fill your hearts with the true spirit of Christmas.”

In relating the account of Samuel the Lamanite, who preached repentance and prophesied of Christ, Elder Bednar asked members of the congregation to imagine themselves as 10 years old, listening to a prophet foretell future events.

In the Book of Mormon account, five years passed and “you are now approximately 15 years old,” Elder Bednar continued and then quoted 3 Nephi 1:5, 9. “But there were some who began to say that the time was past for the words to be fulfilled, which were spoken by Samuel, the Lamanite. … Now it came to pass that there was a day set apart by the unbelievers, that all those who believed in those traditions should be put to death except the sign should come to pass, which had been given by Samuel the prophet.” 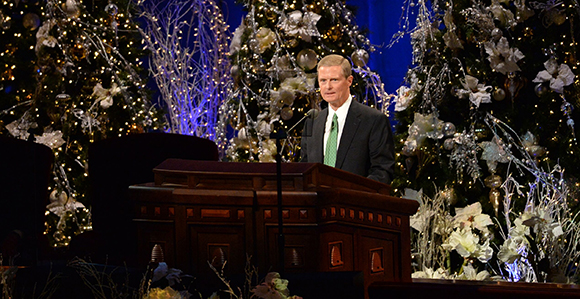 Elder David A. Bednar of the Quorum of the Twelve Apostles addresses a Conference Center audience during the First Presidency's Christmas Devotional, December 6, 2015. 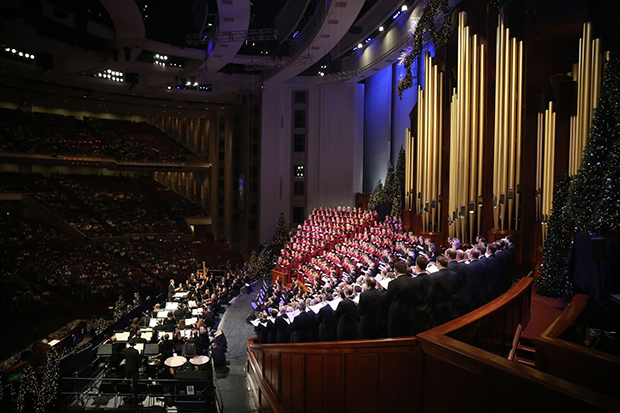 Elder Bednar asked, “Can we even begin to understand what it might have been like to await the sign of His coming and also face the dire deadline of death? Would you and I stand firm and steadfast in the faith, or would we waver and shrink?”

But as prophesied, the sign of Christ’s birth was given, Elder Bednar said. “In a climate of religious persecution and at the tender age of approximately 15, you marveled one evening as the sun went down and there was no darkness.”

The day of Christ’s birth, Elder Bednar said, was a day of deliverance for believers in the New World. “Light as the sign of the Savior’s birth literally saved their lives.”

Elder Bednar then recounted from the Book of Mormon signs of the Savior’s death, inviting individuals to imagine that they are now approaching 50 years of age as they experience the three days of intense darkness foretold by Samuel, the Lamanite prophet.

“What might it have been like to experience those three days of indescribable darkness and then, a short time later, gather with the multitude of 2,500 people at the temple in the land of Bountiful?” Elder Bednar asked. “Can you envision the majesty of the moment as the Savior descended from the heavens and declared, ‘Behold, I am Jesus Christ. … I am the light and the life of the world’?”

Elder Bednar noted that the first two words the Savior used to describe Himself were “the light.” 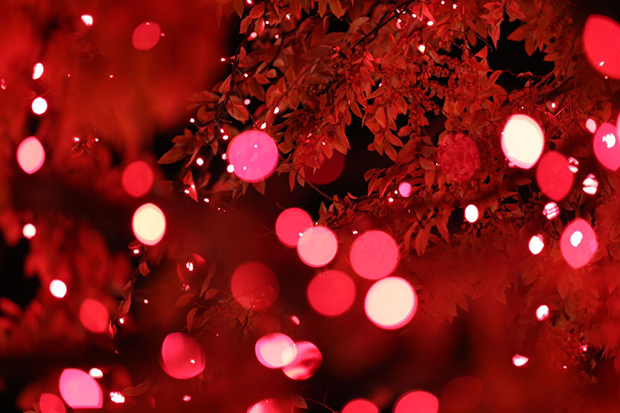 The lights on Temple Square in Salt Lake City, December 6, 2015.

“The account of the first Christmas in the Book of Mormon helps us to learn and more fully understand that Jesus Christ is the ‘light which shineth in darkness’ (D&C 10:58),” Elder Bednar declared. “In every season of our lives, in all of the circumstances we may encounter, and in each challenge we may face, Jesus Christ is the light that dispels fear, provides assurance and direction, and engenders enduring peace and joy.”

Many Christmas traditions include different kinds of light—lights on trees and homes or candles on tables. “May the beautiful lights of every holiday season remind us of Him who is the source of all light.”