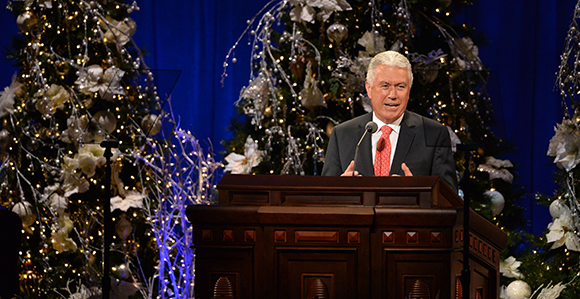 “May we, this Christmas season, remember the Generous One and give profound and heartfelt thanks to our Almighty God, who has given His children wings to fly.” —President Dieter F. Uchtdorf of the First Presidency

One of the best parts about the Christmas season is its music, especially that performed by the Mormon Tabernacle Choir and Orchestra at Temple Square, President Uchtdorf said December 6. Previous to his address, the choir performed “Carol of the Bells,” which he called “one of the most beautiful Christmas melodies ever written.”

“Originally, it wasn’t a Christmas carol at all,” President Uchtdorf explained. “It was based on a centuries-old Ukrainian folk song known as ‘Shchedryk,’ often translated as ‘The Generous One.’” This song, which is about a swallow that flies into a home and foretells good fortune in the next year, was sung by Ukrainian families at the beginning of a new year.

“I love its message of hope and optimism. Isn’t that the message of Christmas?” President Uchtdorf said.

Fittingly, the Christmas spirit is one of generosity, he said. The frantic pace and pressures surrounding Christmas may threaten to overpower that spirit, but he invited “each of us to find, sometime this Christmas season, a moment in the quiet of our souls to acknowledge and offer heartfelt gratitude to ‘the Generous One.’ Let us consider the benevolent, beloved, and boundless mercy of our compassionate Father in Heaven.” 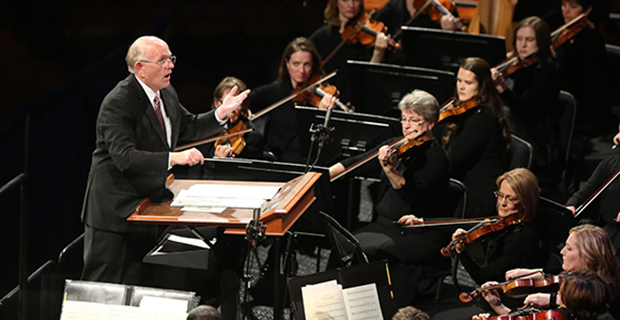 The Christmas season is also a time to be grateful for things that are often taken for granted, even those of inestimable value, President Uchtdorf said.

When Jesus healed ten lepers, nine rejoiced in their good fortune and only one “turned back, and with a loud voice glorified God, and fell down on his face at [Jesus’s] feet, giving him thanks” (see Luke 17:11-17). “Such humble expressions of pure gratitude may seem as rare today as they were in this story, but they do still happen,” President Uchtdorf said. 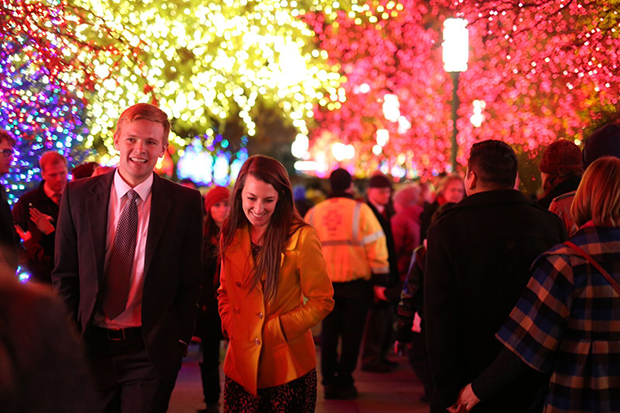 He shared the story of a man in Africa who had never been able to walk due to a disability that forced him to spend most of his time in his parents’ home, as he couldn’t work or go out with friends. When he heard of an event where the Church was bringing wheelchairs not far from his home, he was overjoyed and asked a friend to take him there.

This man waited in line until it was his turn to be lifted into a chair. “At first, he moved about hesitantly,” President Uchtdorf said. “But as he got the feel of the wheelchair, he began to go faster. He moved more courageously.“

But after a time, he slowly wheeled back to the others and asked to be helped out so he could allow someone else to have their turn riding the wheelchair.

“The Church humanitarian missionary knelt beside him and said, ‘This wheelchair is yours.’”

After some persuasion, he finally understood that the wheelchair was a gift to him, and he began to weep. “As he wept, he laughed at the sheer joy of what he felt,” President Uchtdorf said.

“Have we ever felt such pure, unbounded thankfulness?” he asked. “During this Christmas season, and throughout the year, I pray that we will remember the Generous One—our God, our Father, our beloved Shepherd and Counselor.

”When we, His children, plead for bread, He does not hand us a stone,” President Uchtdorf said. “Rather, He endows us with gifts so sublime and precious that they exceed our ability to fully comprehend and even imagine.” These gifts include, peace, joy, abundance, protection, provision, favor, hope, confidence, love, salvation, and eternal life, he said.

“This Christmas season we celebrate the greatest gift of all, the one that makes all other gifts possible—the birth of the babe of Bethlehem. Because of Him, ‘the grave hath no victory, and the sting of death is swallowed up in Christ. He is the light and the life of the world; yea, a light that is endless, that can never be darkened; yea, and also a life which is endless, that there can be no more death’” (Mosiah 16:8-9).

President Uchtdorf concluded, “May we, this Christmas season, remember the Generous One and give profound and heartfelt thanks to our Almighty God, who has given His children wings to fly.”