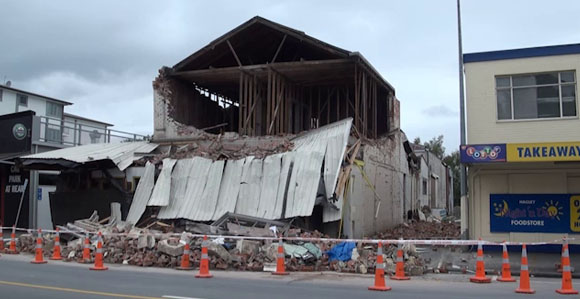 “This is our home, and we know the people who live here … and love them. We need to make this place work for them and for us as a community.” —Stephanie Ormsby, Christchurch resident and Church member

Following a 6.3 magnitude earthquake on February 21, 2011, the city of Christchurch, New Zealand, continues to recover from the widespread destruction of homes, buildings, and infrastructure.

“We are deeply concerned for the people of Christchurch at this time,” it read. “As a church bearing the name of Jesus Christ, we will continue to do as the Saviour would have us do. We will work with government and other groups to bring help, healing and hope to those affected by this disaster.”

At 12:51 p.m. on a Tuesday afternoon, as the people of Christchurch were working, commuting, going to lunch, and shopping, the earthquake struck.

Missionaries Sister Geraline Fafai from Brisbane, Australia, and her companion, Sister Taake Moantau from Tarawa, Kiribati, were riding a bus when the violent motions began.

They watched as a building fell on the bus ahead of them, which they had almost boarded. They later learned that Christchurch’s cathedral, where they had planned to be before their appointment was canceled, sustained severe damages during the quake.

The sisters got off the bus calmly as the buildings continued to shake and people around them tried to call loved ones on cell phones, although communication lines were knocked out.

“We were walking along the road,” Sister Moantau said. “There were big cracks on the road and mud up to our knees.” (Watch missionaries talk about their experiences on this YouTube video.)

Jared Ormsby was working, and his wife, Stephanie, was at the mall when the earthquake began.

Brother Ormsby and several work colleagues took refuge under a meeting room table on the seventh floor of their office building, while Stephanie and their two children—nine months and 3 years old—rode the rolling escalator down to the main floor of the mall, where people were running for the exits.

“There was certainly a prayer in my heart,” Brother Ormsby said. “And there came into my heart a peace and a knowledge that we would be OK.” (Listen to the Ormsbys talk about the earthquake here.)

February’s earthquake, though smaller in magnitude than September’s 7.1 magnitude earthquake, resulted in significantly more damage because of the time of day and its closer proximity to the earth’s surface.

Status of Church Members and Properties

The Church has confirmed that all members and missionaries in the area are safe and accounted for, although about 18 member families have moved out of their damaged homes to stay with family and friends.

Each of the four local meetinghouses suffered major structural damage, but two have been approved for use while the other two undergo evaluation and repair.

Immediately following the earthquake, the Church mobilized to provide relief.

The local stake high council set up stations in the four ward areas. Members donated food storage to their nearest station so it could be distributed to those in need.

The Area office in Auckland shortly thereafter secured an order of water and food, including spaghetti, baked beans, fruit salad, and canned corn, which was delivered to each of the stations.

LDS Family Services staff and volunteers traveled to Christchurch soon after the earthquake to provide counseling for Church leaders and members.

Anyone needing respite accommodation was able to use the Church College of New Zealand campus in Hamilton, New Zealand.

Over the weeks, more than 600 volunteers from around the world have flocked to New Zealand to offer help, including those from the Church’s emergency response effort.

At the beginning of March, Jack and Joan Pferdner of the South Jordan Utah River Ridge Stake, USA, were serving a mission near the earthquake-stricken area when they were assigned to Christchurch to help assist in the response efforts.

“We have seen firsthand how adequate preparation not only makes your family more comfortable in such an event, but allows you to offer aid and comfort to your neighbors,” the Pferdners wrote on their blog while in Christchurch. “The things most people lacked were clean water, immediate food supplies, sanitation facilities, and shelter.”

Missionaries from the Church have been involved in cleanup and other community service in Christchurch since the earthquake.

Changing their suits for rubber boots and t-shirts, Elder Kevin Spampinato of San Diego, California, USA, and Elder Joel Lekias of Perth, Australia, shoveled silt and dirt from the road and driveways.

“It’s good work; we enjoy it,” Elder Lekias said. “But even more, it makes a big difference for a lot of people, especially when they can’t do it themselves.” (Watch this new YouTube video to see how missionaries are helping Christchurch residents.)

Weeks later, recovery efforts continue in Christchurch, even as the state of national emergency continues.

A media release from New Zealand’s Earthquake Recovery Minister Gerry Brownlee announced that preliminary evaluations show that 10,000 houses in and around Christchurch will need to be rebuilt.

In addition, more than 2,500 commercial and residential buildings have been marked uninhabitable for the present.

More than 200,000 people are estimated to have been affected; 10,000 have been displaced. The number confirmed dead is at 166. Approximately 10 percent of the city is still without water, sewage, or electricity. The expected cost of recovery is more than $12 billion (NZ).

Prime Minister John Key has announced that a National Memorial Service for the victims of the February 22 earthquake will be held in Christchurch on Friday, March 18.

Amid all this, the Church continues to work closely with local government and relief agencies to assess community needs and provide assistance.

“There will continue to be more opportunities over the weeks and months ahead that the Church will be involved in,” Area Welfare Services Manager Steve Stebbings said. “The Church has always had an interest in and cared for people regardless of religious status or nationality.”

Members and missionaries continue to provide service and care to those affected by the earthquake.

“The members have done a great job, and they continue to work closely with local government and humanitarian organizations,” said Nate Leishman, humanitarian disaster response manager. “There will be some ongoing efforts with cleanup and reconstruction [over] the next several months.”

“This is our home, and we know the people who live here … and love them,” Sister Ormsby said. “We need to make this place work for them and for us as a community.”

Humanitarian aid and donations are being accessed to provide food and water to those who need it.

“Our guiding purpose in welfare and humanitarian services is we seek for opportunities to relieve the suffering of the family or individual,” Brother Stebbings said. “We also strive to help them become self-reliant after these tragedies.” (Watch Steve Stebbings provide an update following the earthquake.)

Recovery from the effects of the earthquake continues, but the faith and hope of those in Christchurch remains unshaken.

“We carry on because we have faith in Christ,” Brother Ormsby said. “We know that He lives, and we know that the adversity we face in this life is a part of our Heavenly Father’s plan.”