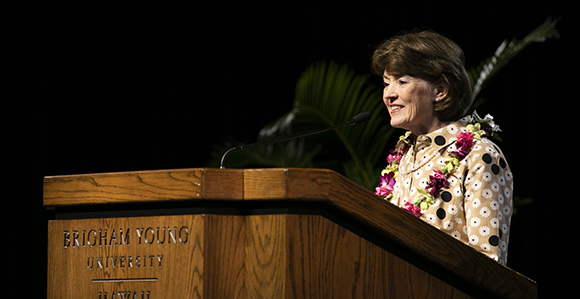 Just as Book of Mormon prophets “passed on the baton” to succeeding generations through final “lectures” about principles most important to them, Sister Tanner taught students about the principle of greatest importance to her—charity.

Book of Mormon prophets Mormon and Moroni taught in their final “lectures” that charity is the greatest attribute one can attain. Moroni taught, “Except ye have charity ye can in nowise be saved in the kingdom of God” (Moroni 10:21).

Paul in the New Testament taught that we will not be separated from the love of God, regardless of the trials we face in mortality: “Who shall separate us from the love of Christ? shall tribulation, or distress, or persecution, or famine, or nakedness, or peril, or sword? . . . Nay, in all these things we are more than conquerors through him that loved us” (Romans 8:35, 37).

Sister Tanner, who authored the Relief Society book Daughters in My Kingdom: The History and Work of Relief Society, was the day’s sole devotional speaker; President Tanner conducted the event.

Sister Tanner said her husband taught her an insight years ago about the meaning of the phrase “love of God,” describing the fruit of the tree of life in the prophet Lehi’s dream in the Book of Mormon.

“He explained that the preposition ‘of’ in the phrase ‘the love of God’ can mean ‘love from God,’ ‘love for God,’ or ‘love like God loves.’

“When I feel love from God, I have the ‘strength to do all things.’ It propels me forward in goodness, in goals, in perspective. It heals my soul,” Sister Tanner said.

“When I feel love for God, I want to obey His commandments, . . . and I have increased ability to sacrifice to build His kingdom and do His will.

“When I love like God, I act as His instrument, His force for good in someone else’s life. My love is Christlike,” she said. 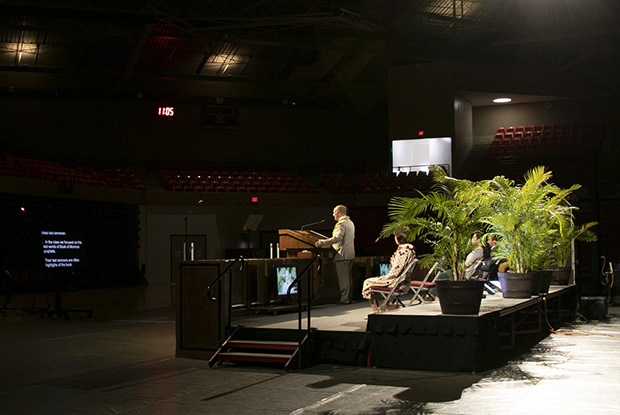 Sister Susan W. Tanner is introduced to an empty auditorium at BYU–Hawaii. She delivered her Tuesday, May 5, 2020, devotional address to BYU–Hawaii students via livestream. Photo courtesy of BYU–Hawaii.

Sister Tanner first learned of the power of love from her parents. They sang nighttime lullabies, spoke kind words, gave her opportunities to learn and serve, met her physical needs, and taught her how to recognize the Holy Ghost.

“With an earthly experience of this kind of love, it was easy to feel of a Heavenly Parent’s love for me as well.”

Sister Tanner’s parents showed their love for the Lord by keeping His commandments, sometimes sacrificing much to do so: “My dad had to sell a family business in order to accept a call to serve a mission, and my mom had to leave her widowed mother.”

She added a side note: “Perhaps some might not have had that same love in their growing-up homes, but you can be the instrument for that love in your current and future homes.”

Sister Tanner recently read a book about Ray Hinton, a prisoner who was wrongly charged with murder and spent almost 30 years on death row until he was proven innocent. His mother believed in God and taught him about God’s love for him. Nevertheless, Hinton spent the first three years in prison in angry silence for being unjustly incarcerated.

Until one night, when he heard an inmate in the cell next to his crying uncontrollably and pleading to God for help.

Hinton later wrote, “The man started crying again, and I realized that I was crying, too . . . and I wept silently for a man I didn’t even know. . . . I had made the choice to spend the last three years thinking about killing. Despair was a choice. Hatred was a choice; anger was a choice. I still had choices, and that knowledge rocked me. . . . Hope was a choice. Faith was a choice. And more than anything else, love was a choice” (Anthony Ray Hinton, The Sun Does Shine).

So, for the first time in three years, Hinton spoke: “Hey, are you all right over there? Whatever it is, it’s going to be OK.”

His sobbing inmate informed Hinton his mom had just died. 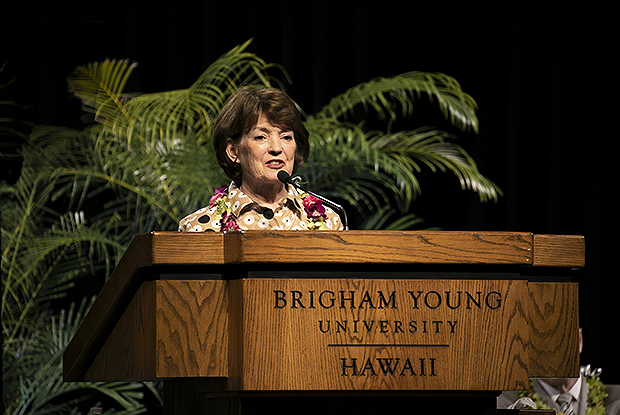 “I can’t describe exactly what it is to have your heart break open, but in that moment, my heart broke wide open, and I wasn’t a convicted killer on death row; I was Ray Hinton, . . . my mama’s son.”

Other inmates also expressed their sympathies in the dark of the night. The inmates then listened for over two hours as their fellow convict told stories of his mother.

“I wasn’t expecting to have my heart break that night,” Hinton said. “I wasn’t expecting to end three years of silence. It was a revelation to realize that I wasn’t the only man on death row. I was born with the same gift from God we are all born with—the impulse to reach out and lessen the suffering of another human being. It was a gift, and we each had a choice whether to use this gift or not.”

That gift, Sister Tanner explains, is the gift of charity.

Hinton spent the remaining 27 years of his sentence sharing God’s love with his neighbor prisoners.

In the recent April 2020 general conference, Elder Neil L. Andersen explained that spiritual experiences are accompanied by a confirmation of God’s love.

“I needed that confirmation when I was first called to serve as Young Women President for the Church,” Sister Tanner said. “At first, I felt terrified and inadequate, lying awake at night worrying, repenting, and crying.”

However, after many such nights, she had a moving experience. As she thought of the young women throughout the world, “the most wonderfully warm feeling began to envelop me and surge through me.”

She felt Heavenly Father’s love for each of those young women—and for her. “For the first time I felt peace, because I knew that what Heavenly Father wanted me to do I could do.”

A similarly powerful experience occurred in Sister Tanner’s life in March. Five days after she returned to Hawaii from the mainland, she fell ill. She felt tightness in her chest, achiness, coughing, and a low fever. She was tested for COVID-19 and self-quarantined herself, awaiting the test results “impatiently.”

One night, she couldn’t breathe. Her husband gave her a priesthood blessing. In it, he reassured her she would heal. “The rest of the rather detailed blessing was about Heavenly Father’s and Jesus Christ’s love for me. I was overwhelmed with the surge of strength I felt in their love.”

Sister Tanner did not reveal her test results; but after her priesthood blessing, her sickness began to dissipate, she said. “God’s love healed me.”

Sister Tanner testified of Jesus Christ’s Atonement, saying it is Christ’s love for His Father, showing He loves like His Father and fulfills His Father’s plan because of His absolute assurance of love from the Father.

She called the Atonement Jesus Christ’s “last lecture” on earth; it was His “supreme act of love.”

At the end of their lives, Sister Tanner’s parents “passed on the baton” to the next generation.

As she sat by her father’s side the day he died, “his final, silent message to me was a hand squeeze, not powerful physically but a squeeze that spoke of a perfect love that will endure forever.”

She recalled her mother, who received a priesthood blessing on her final day of mortality. “She opened her eyes at the conclusion, looking at each one of us. The only word that she could muster was soft but clear: ‘love.’”

Sister Tanner’s parents’ “last lectures” sealed their lifetime of teachings that the love of God is “most desirable above all things. . . . Yea, and the most joyous to the soul” (1 Nephi 11:22–23).

She concluded: “I testify that the greatest of all the gifts is His pure love for us—the miracle that rescues you and me. May we pray with all the energy of our hearts to receive and share that gift—charity.”