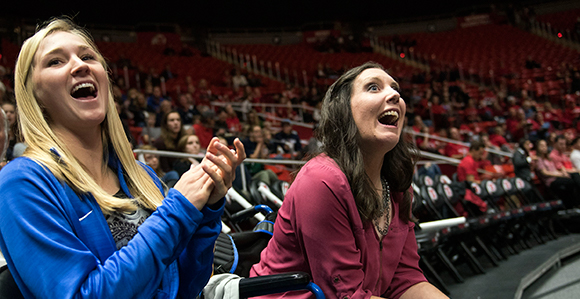 Toughness is a prized virtue in college basketball. Everyone loves the guy who scraps for rebounds, dives on loose balls, or takes that hard charge to draw a foul.

But players and coaches on the women's basketball team at Brigham Young University have discovered that true grit isn't only revealed in stat sheets and game film. For the past six seasons, they've watched Cougar team manager Kylie Webster go about her daily duties at practice and games. She works without complaint and almost always with a smile—redefining what “toughness” means.

By her own definition, Kylie is a daughter, a sister, a friend, a BYU student, a Mormon, a diehard Cougar fan, and an incurable basketball junkie. She's also a survivor. Born with a rare neurological disease called Leigh syndrome, Kylie was not expected to live beyond her 8th birthday. But the Lord, she said, has blessed and sustained her through childhood, her teen years, and today, as an adult college student.

Still, each day presents Kylie with challenges. She has limited use of her legs, typically gets around in a wheelchair, and endures frequent physical therapy to maintain muscle strength. She operates a keyboard with one finger.

And school, she added, “does not come easy for me.”

But Kylie is quick to say that she never faces those challenges alone. “My Heavenly Father is my best friend,” she said. “I've always turned to Him in times of struggle and need.”

The lifelong member said each day offers a choice: she can be bitter or find joy in what life offers. She prayerfully picks the latter “because I know one day this will all be worth it. I'll be able to walk and play basketball with the other girls.”

Basketball. For most sports fans, it's a game. For Kylie, it's a lifestyle. “Basketball and all these wonderful people in my life, including my family, help get me out of bed each morning.”

Her duties with the BYU squad include running the game clock during scrimmages, setting out the balls before practice, gathering warm-up jerseys at games, and distributing stat sheets to coaches.

She's thrilled when the Cougars win. Defeats, she said, bring out her salty side.

“I'm a competitive person, so when we lose I get really frustrated.”

Guard Cassie Broadhead has compiled plenty of memories during the four years she’s played at BYU. The redshirt junior has started for a Division 1 basketball program, helped the Cougars win a conference championship, and has twice competed in college basketball's Big Dance—the NCAA tournament.

But she includes her association with Kylie at the top of her personal highlight list.

“Kylie's a huge asset to our team,” she said following a recent practice. “She motivates us, gets us whatever we need, she's our biggest cheerleader—and she's one of my best friends.”

Kylie said she can trace divine hands at work each time basketball offers her a friend such as Cassie. “The Lord has always put special people in my life—sometimes they help me, and sometimes I help them.”

BYU assistant coach Melinda Bendall said she's never worked with a team manager quite like Kylie. “There could not be a better influence on our players than Kylie,” she said.

Coach Bendall adds that it's uplifting to watch the players look out for their loyal manager. They appreciate her commitment and enjoy her big personality. They've learned her physical challenges don't define her. They call her a teammate.

A family studies major, Kylie plans to work with troubled teens after graduation. “I feel like I can help people know that even if they are different or have struggles, there is a lot that they can achieve.” 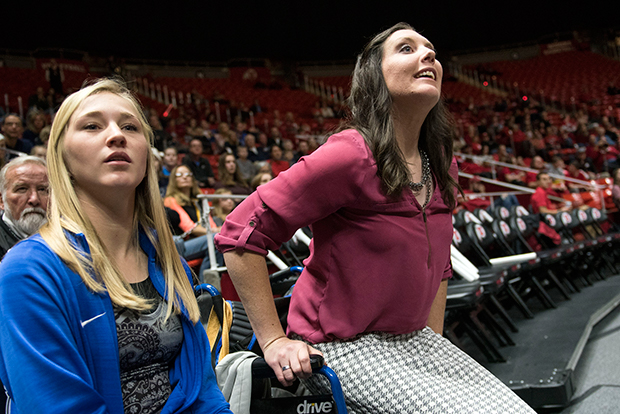 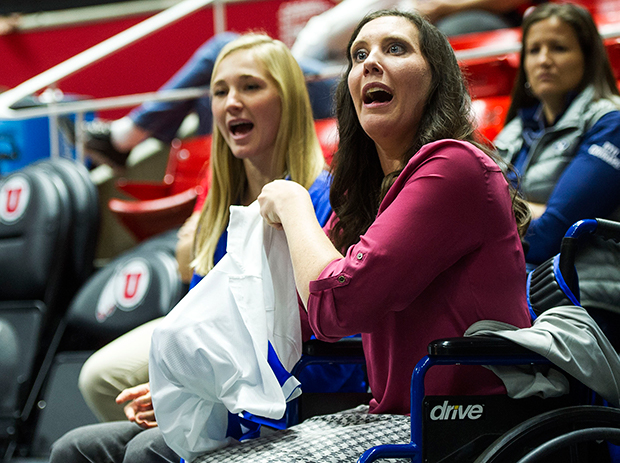 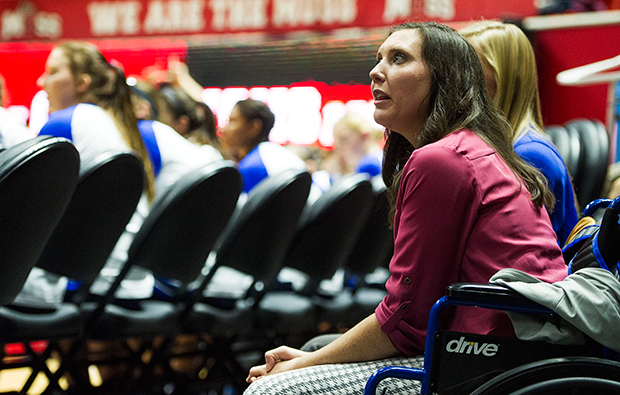 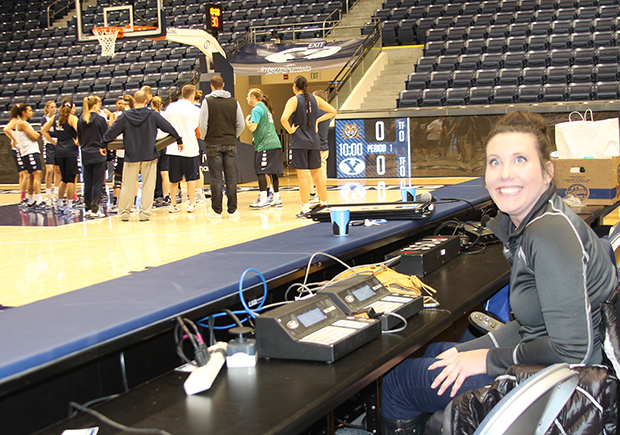 BYU women’s basketball team manager Kylie Webster operates the game clock at a December 14 practice at the Marriott Center. Kylie, who was born with a rare neurological disorder, has been the team manager for six years. Photo by Jason Swensen.