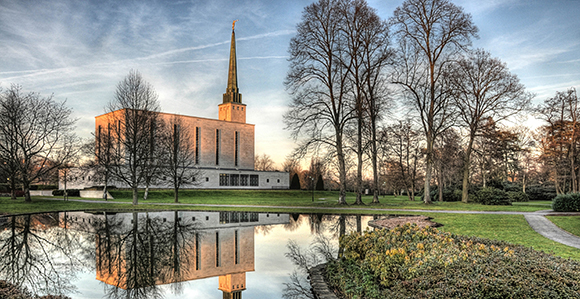 Dedicated in 1958, the London England Temple has served hundreds of thousands of people and is celebrating its 60th anniversary this year.

“Whispered one woman to her husband: ‘I’d like to come here for a holiday.’” —1958 Time article

In an area where the Church has long been established—the first unit was created in Preston in 1837, just seven years after the Church was officially organized—the London Temple stands as the first temple in the United Kingdom and is the Church’s 12th operating temple.

For many years, converts to the Church would immigrate to the United States to be with more Church members. In the 1950s, Church leaders encouraged new members of the Church to build the Church in their native lands, causing the Church membership in Britain to increase.

With that counsel came the need for a temple for the members of the Church in England.

The site of the original 34,000-square-foot building, located 25 miles south of London in Newchapel, Surrey, England, was selected in June 1952 by President David O. McKay and Elder Stayner Richards.

A year later the Church purchased the 32 acres identified, and an official announcement of plans to build the temple was released on August 10, 1953. Two years later, President David O. McKay participated in a groundbreaking ceremony on August 27, 1955.

A Church News article from September 20, 1958, reported the reaction of President David O. McKay after returning home from his trip to England, saying he “lauded the workmanship of the London Temple.”

Prior to the dedication, 76,000 people toured the temple during a public open house.

According to a Time magazine article dated Monday, September 15, 1958, the new temple was opened to the public for 17 days, and at the time of dedication there were 11,000 Church members in Britain, with 75 chapels.

“The visitors, warned not to talk or smoke within the temple, were escorted in groups through the building (cost: $1,700,000), saved their questions to be asked later,” the article stated. “They had plenty of questions: Why was there a telephone switchboard? Why were there locker rooms and powder rooms with Queen Anne–style dressing tables? What was the green and beige drawing room, called the Celestial room, used for, and why should a church be furnished like a luxury hotel, with grey wall-to-wall carpeting, concealed lighting, air conditioning, and armchairs in fawn and black? Whispered one woman to her husband: ‘I’d like to come here for a holiday.’”

Some 32 years later the temple closed for renovations, adding 8,500 square feet and a fourth floor to the existing building. A rededication was held on October 18–20, 1992, where President Gordon B. Hinckley led the 10 sessions.

It wasn’t until December 15, 2008—more than 50 years after the temple was first completed—that an angel Moroni statue was placed on the spire of the temple.

“Under gray, threatening skies with 150 [spectators], … a helicopter flew in from Buckinghamshire, 58 miles away, to lift the 8-foot, gold-leaf covered statue to the top of the 50-year-old temple,” a Church News article stated. “Scaffolding—erected earlier—made it possible for construction workers to access the top of the 180-foot spire and secure the statue. The event briefly stopped traffic on the busy A22, which passes the temple, and onlookers got out of their cars to peer through the temple gates.”

The placing of Moroni was the conclusion of the Jubilee Celebration of the London Temple held in 2008. The Jubilee project included restoring the Manor House and the visitors’ center, adding new mission offices to the temple site, and renovating the accommodation center for temple patrons.

Today there are more than 186,000 members of the Church in the United Kingdom, with six missions, 327 congregations, and two temples. In June 1998, a second temple in Great Britain, located in Preston, England, was dedicated. 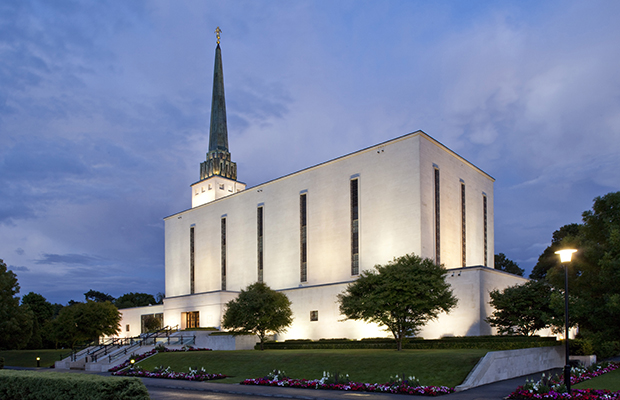 The statue of angel Moroni was not placed on top of the temple’s spire until 2008, 50 years after the temple opened.