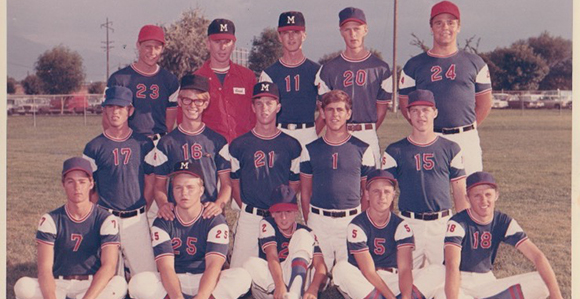 “The softball program of the Church … is a great fellowshipping tool, one of the great tools we have in the Church.” —Elder Mark E. Petersen

During the late 1960s, the boys from the Chula Vista 1st Ward weren’t expected to go far in the Junior Fast-Pitch All-Church Softball Tournament.

“We were not figured to do anything in this tournament,” Aland said. “Every time we came up against a team, it was ‘Oh, that’s too bad you have to play those guys.’ Then we end up beating them.”

Sporting red, white, and blue uniforms, the Latter-day Saint softball team from California went on to win All-Church tournament titles in 1968 and 1969 before finishing as the runner-up the 1970 tournament. They also won the Sportsmanship Trophy in 1968.

“I look back on that as a major accomplishment,” Aland said. “Because of our pitching, which was Rex Whitehead, we dominated everybody. It was fun, a lot of fun. That is what I remember most. We weren’t supposed to win, and we did.”

Coaches and players of the Chula Vista ward softball team, who now live in parts of Idaho, Utah, and California, gathered a few weeks ago in Salt Lake City to celebrate the 50th anniversary of their memorable achievement. Some of them hadn’t seen each other since their playing days.

“It was good to hang out for a couple of hours, have dinner, and talk about the good old days when we were up there playing,” Whitehead said. “It was déjà vu, a lot of fun.”

Rick Black, of Orem, was one of the younger players. He looked up to many of the older teammates as mentors and examples. Seeing them again made for a sweet reunion.

“Life has smacked us all around a bit, and it was good to see they’ve come out on the other side,” Black said. “They all still have smiles on their faces, they are working hard, they are good citizens, they have great families. It was really good to see.”

Reflecting on their playing days, Black marveled that so many talented players all lived in the same ward boundaries. Several of them went on to play college baseball, football, and basketball. Miller played football at Utah State University and was a scout-team player for the NFL’s St. Louis Cardinals and San Diego Chargers. Greg Wilkes pitched at San Diego State and played in the minor leagues for the San Diego Padres and Houston Astros.

“We were kind of in the Bermuda Triangle of having some incredible athletes, all the same age, same ward, and same geographic boundaries at the same time, no ringers,” Black said.

When the boys from Chula Vista qualified for the weeklong tournament in Salt Lake City, a ward member with connections arranged for them to stay in a Church building in Holladay. The team camped out in the Relief Society room, cooked in the kitchen, and used the facility’s showers and bathrooms. They were also hosted for meals by the family of Elder Marvin J. Ashton, who was part of the committee that organized the tournament and later was a member of the Quorum of the Twelve Apostles.

The All-Church tournaments of the late 1960s featured nearly 100 teams with some traveling from as far away as Canada, Georgia, and California. Thousands of fans turned out to watch the championship games at George Q. Morris Park.

Elder Mark E. Petersen, a member of the Quorum of the Twelve Apostles at the time, spoke to the participants in a pre-tournament devotional in the Salt Lake Tabernacle, according to the LDS Church News archives.

“The softball program of the Church has many values. It not only brings about conversions and reconversions, but also it is one of the best physical fitness programs in the nation today,” Elder Petersen said in the 1968 devotional. “But more than this, it is a great fellowshipping tool, one of the great tools we have in the Church.”

Whitehead was named the team’s most valuable player in the 1968 tournament, and Aland, whose interest in the sports program led him to join the Church at age 16, played third base and was the MVP in 1969.

“The victories were important, but I’m still really impressed with these guys winning the championship and the sportsmanship award,” Bob Wilkes said. “That wasn’t something that happened very often. It showed what kind of guys they were.”

Because they won back-to-back titles, the Chula Vista team is strongly considering another 50th anniversary reunion in 2019. 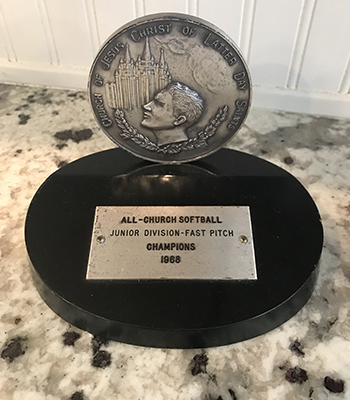 This is one of the trophies received by the Chula Vista, California, team that won two All-Church softball tournaments in the late 1960s. Photo courtesy of Rick Black. 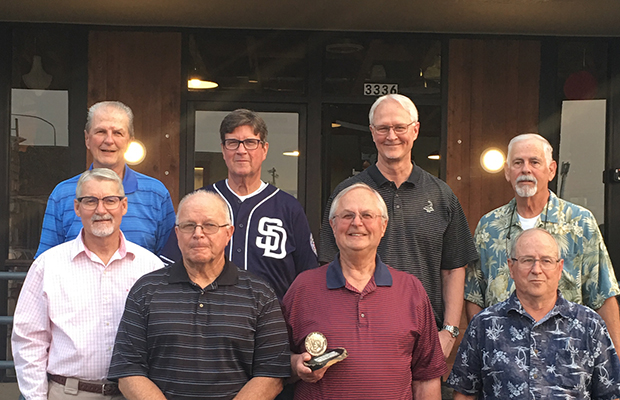 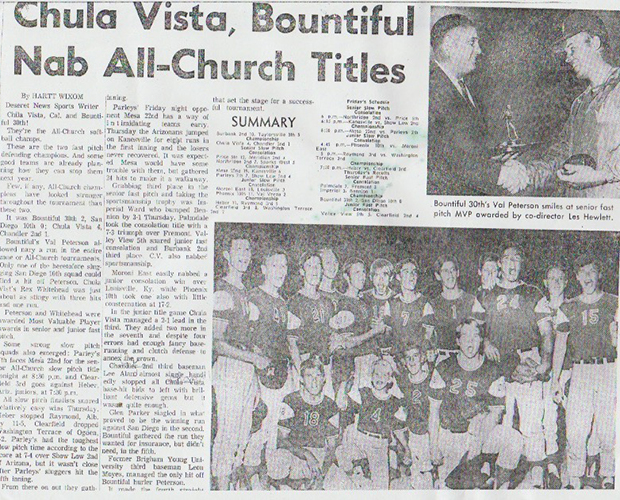 A newspaper clipping details the victory of a softball team from Chula Vista, California, that won the All-Church softball tournament in the late 1960s. Photo courtesy of Rick Black.