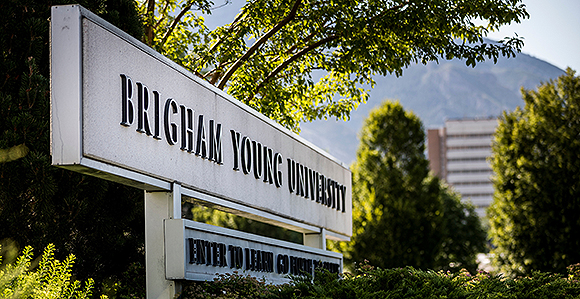 A campus sign at the entrance of Brigham Young University in Provo, Utah. Photo by Nate Edwards, BYU.

In an effort to “help reduce misunderstanding and anxiety” expressed among students at Brigham Young University regarding the way the university responds to violations of its Honor Code, the Church-owned university has updated its website—honorcode.byu.edu—with additional resources and information regarding Honor Code Office procedures.

Released last month, the update also clarifies and explains changes to the Honor Code Office procedures that were made earlier, in May.

One such change from earlier this year was announced in a letter to BYU students on May 13. It stated that students facing charges of Honor Code violations would be told at the beginning of their first meeting with the Honor Code Office about the nature of the reported violations as well as the name of the person making the report against them—excluding situations where safety is a matter of concern.

“We’ve learned we need to better educate the campus community about what a correct process looks like,” said Kevin Utt, director of BYU’s Honor Code Office, in the news release.

Since being named Honor Code Office director in January, Utt has undertaken a thorough review of all of the office’s practices and policies.

“I have taken seriously the charge to review each facet of Honor Code process,” Utt said in the news release. He noted the feedback his office has received from students has been an essential part of the review process and has helped to inform adjustments being made to policies and procedures.

“Being transparent helps a student articulate if something isn’t going according to plan and provides the opportunity for concrete feedback,” Utt said, adding, “We will continue to communicate updates as they are rolled out so that students know what to expect as they arrive on campus for the fall semester.”

In addition to completing training with the Association for Student Conduct Administration regarding how to appropriately ask questions during student-conduct review meetings, Utt noted that HCO employee training will be regularly reviewed and will be included as part of the onboarding process for HCO employees.

“One important part of this training is how to ask questions sufficient and appropriate to the case and not go beyond the scope needed,” Utt said. “This best practice helps make the process respectful and fair.”

“Students will be presumed to NOT be in violation of an Honor Code policy unless they either accept responsibility or the investigation process makes such a determination,” the news release stated.

HCO employees were previously referred to as “counselors.” That title created confusion for some about their actual role, and as such, to better reflect their role as “student conduct professionals—and not therapists,” HCO employees are now referred to as “administrators.”