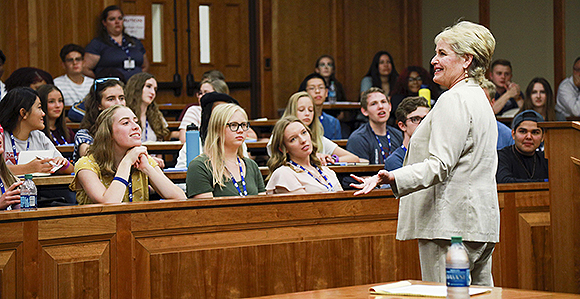 BYU Law Camp participants gather in a mock courtroom to participate in a discussion with Wendy Archibald, the assistant dean of student and internal relations at the BYU Law School. Photo courtesy of BYU Law School.

“We want to help students find ways that they can make a positive difference. We want them to feel like they can talk about issues that matter to them—and then learn how they can become advocates for that issue.” —Amberly Page, program director

More than 80 teenagers recently attended BYU Law Camp—an intensive, week-long program that challenges young people to discover the vast aspects of the law while becoming advocates for positive change in their own communities.

Los Angeles resident Kaleah Sykes, 17, is a three-year veteran of BYU Law Camp. After recently graduating from high school, she plans on pursuing a law enforcement career. And she’s considering law school “because that can open up so many doors.”

But Sykes makes her way back to the Church-owned campus each summer for Law Camp “because it’s fun—and you get to talk to a lot of different types of people.”

Diversity was one of the highlights of this year’s iteration of BYU Law Camp, said Amberly Page, an admissions specialist and BYU Law School graduate who helps direct the annual youth program.

Many participants are Latter-day Saints, but many are not. “And we have campers coming from all across the United States, including Hawaii,” she said. “About two-thirds of them are from outside of Utah.”

A welcome byproduct of those differences in backgrounds is a range of opinions on a variety of topics.

“The campers are all very bright and informed, and they want to know about the issues of the day. They bring to camp many different opinions. And, hopefully, those opinions are tested,” said Page.

A camper’s stamina will also be tested. 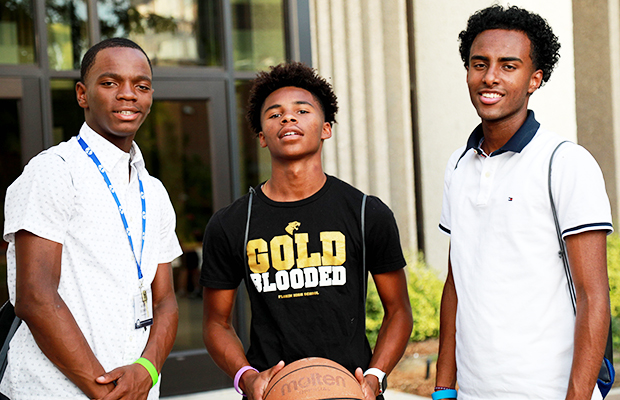 BYU Law Camp is a busy week. The schedule includes a field trip to the federal courthouse to observe actual court proceedings, a moot court and legislature session, and several discussions with sitting judges, law professors, and other legal professionals.

But this is still summer camp—so there’s also time for recreation and a bit of silliness. This year’s campers teamed up to make it out of an escape room, shared their talents at a camp variety show, and got to know each other better at a camp-ending dance. 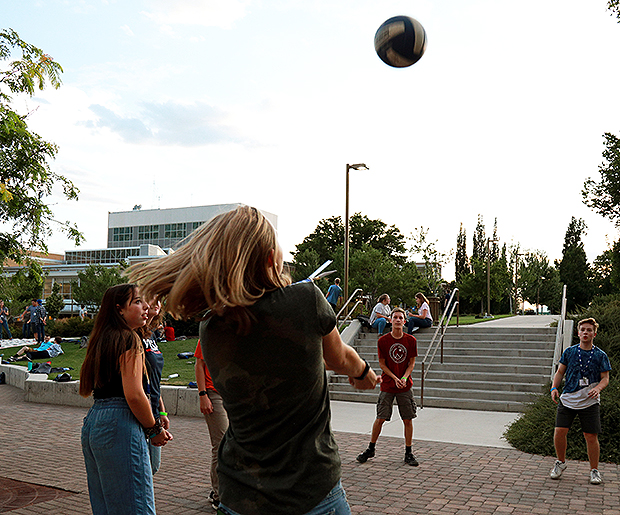 Meanwhile, listening to and counseling with the teenagers helped Crespo hone her own interpersonal skills that will serve her well as an attorney. 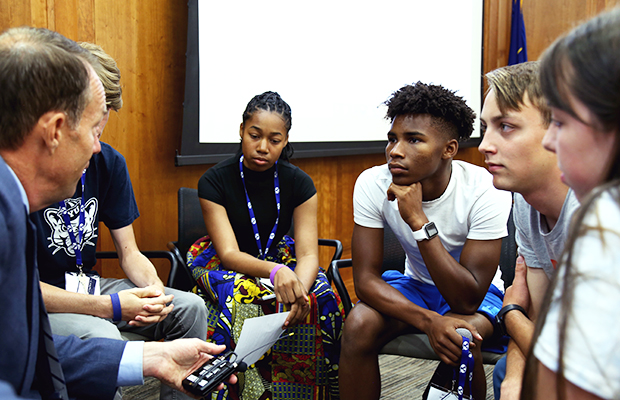 Participants of the 2019 BYU Law Camp take part in a group discussion. The annual camp offers young people opportunities to discuss and better understand the legal issues of the day. Photo courtesy of BYU Law School.

The Kansas City native added she was impressed by the civility that the young campers brought to emotional discussions about issues such as immigration.

“We can expect a lot from these youth,” said Crespo.

Page believes the goals of Law Camp embody the motto of BYU: “Enter to Learn, Go Forth to Serve.”

“We want to help students find ways that they can make a positive difference. We want them to feel like they can talk about issues that matter to them—and then learn how they can become advocates for that issue,” she said.

Sarah Stevenson, a 17-year-old camper from Minnesota, attended Law Camp for the first time this year to learn more about the legal world.

“Law is something that I’m interested in, and I’ve learned the field of law is very broad,” she said.

As a Latter-day Saint, Sarah said she also came to appreciate how laws that uphold and defend human rights can align with gospel principles.

Fourteen-year-old Matthew Risher of Las Vegas said he was often challenged to step outside his comfort zone during Law Camp. He doesn’t particularly enjoy writing—but with the help of a mentor, he was able to craft a legal brief.

“And eventually, everything came together,” he said with a smile.

Seth Barzeron of Compton, California, said his week at BYU Law Camp “opened my eyes to all the opportunities in law.” He’s even considering becoming a lawyer.

For Seth, a highlight of camp was speaking with fellow campers who initially seemed to hold opposing views on key issues. But after sharing and listening, “we found out we basically felt the same way.”