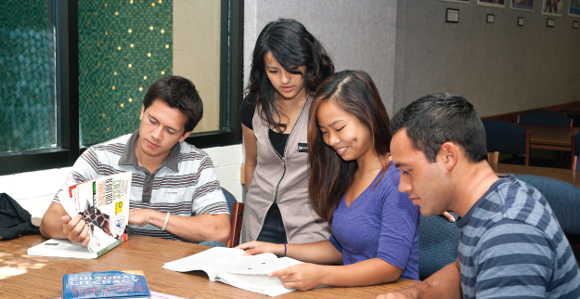 A new center for English language learning recently launched at BYU–Hawaii. The program will assist students on campus in their efforts to continue learning English after they complete requirements in the English as an International Language program.

“I see a school that looks not only upward to heaven but outward, … a school whose international mission informs all we do, including the students we pursue and the programs we provide.” —John S. Tanner, president of BYU–Hawaii

Teaching English to speakers of other languages has been a natural core competency at Brigham Young University–Hawaii, the baccalaureate campus with the highest percentage of international students in the United States. Now that offering will continue to expand its global influence with the establishment of the new center for English language learning at the university.

“We want to assist students on our campus in their efforts to continue learning English after they complete requirements in the English as an International Language (EIL) program,” said Neil J. Anderson, professor of English language teaching at BYU–Hawaii. Brother Anderson will serve as the center’s first director.

“Language development takes a long time. A graduate with a degree from BYU–Hawaii with a high level of English language proficiency will be more employable in the marketplace. We want potential employers of our students to be confident that their English language skills are fully developed.”

The center for English language learning focuses on three things: first, to facilitate the production of quality online and face-to-face instructional materials for learners of English; second, to support faculty within the Church Educational System of the Church who work with learners of English to encourage continued development and growth in language proficiency; and third, to prepare learners of English for vocational and academic learning opportunities.

“I see a school that looks not only upward to heaven but outward toward the Pacific and Asia, a school whose international mission informs all we do, including the students we pursue and the programs we provide. … I also envision a university that is really good at helping international students learn English. And I see a school that shares this expertise with other Church schools and entities, thereby playing a critical and distinctive role in the larger Church Educational System. … I see a school that serves its vast target area by leveraging resources through collaboration and technology.”

International students make up more than 40 percent of BYU–Hawaii’s student body, with the majority of these students being non-native English speakers. The university started teaching English to international students in the early 1960s, making it one of the oldest English as an International Language programs in the world. From the beginning, the faculty teaching EIL at BYU–Hawaii have been developing high-quality curricula and resources to advance the university’s prophetic vision of sending graduates forth to make a significant difference in the world. High levels of language proficiency are needed to make a difference in the world.

The bachelor’s degree program in Teaching English to Speakers of Other Languages began in 1967 and was designed to prepare teachers to be professionally prepared to address the linguistic and cultural challenges of second-language learners of English. Offering one of the few TESOL undergraduate programs in the world, BYU–Hawaii has produced many graduates who have gone on to successful careers in English language teaching in Australia, Brazil, Indonesia, Japan, Mexico, New Caledonia, New Zealand, Samoa, South Korea, Tahiti, Thailand, United Arab Emirates, Vietnam, and other countries.

The TESL Reporter, a well-respected publication that focuses on pedagogical applications in the EIL classroom, has circulated valuable information to teachers in over 100 countries since 1967. With this rich history, BYU­–Hawaii is uniquely situated to help coordinate efforts across the university’s sponsoring organization, which is the Church, to strengthen English language teaching and learning throughout the world. 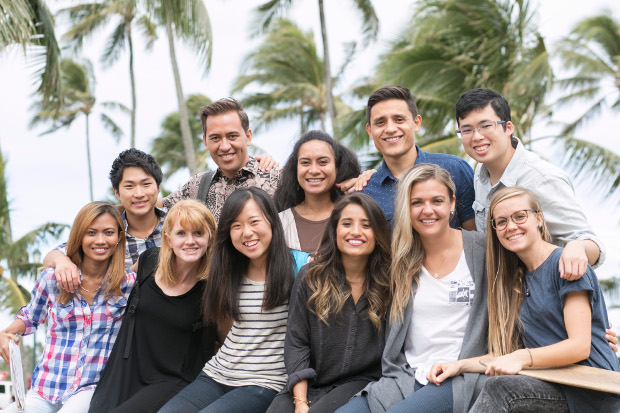 Students at BYU–Hawaii come from more than 70 countries, making it the most internationally diverse baccalaureate university in the United States. A new center for English language learning was recently launched at BYU–Hawaii. Photo courtesy BYU–Hawaii University Communications. 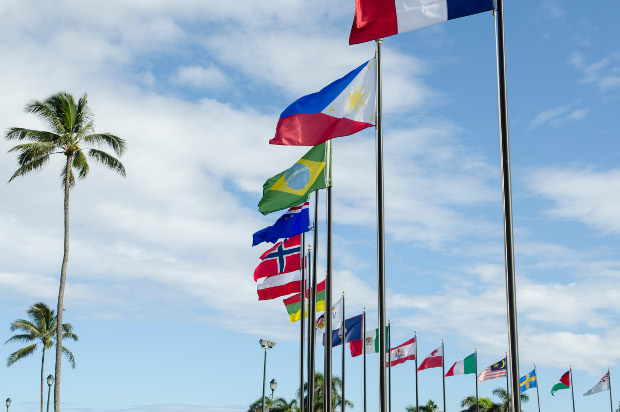 A few of the flags from the countries represented by the international student body at BYU–Hawaii. A new center for English language learning was recently launched at BYU–Hawaii. Photo courtesy BYU–Hawaii University Communications. 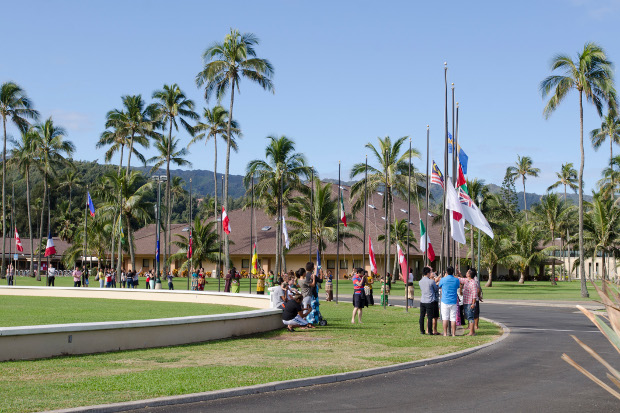 Students gather at BYU–Hawaii’s annual Spirit Week Flag Raising to raise their country’s flag together with their fellow students from more than 70 countries. A new center for English language learning was recently launched at BYU–Hawaii. Photo courtesy BYU–Hawaii University Communications.