Bulgaria, Russia, and Ukraine Celebrate 20 Years of the Church 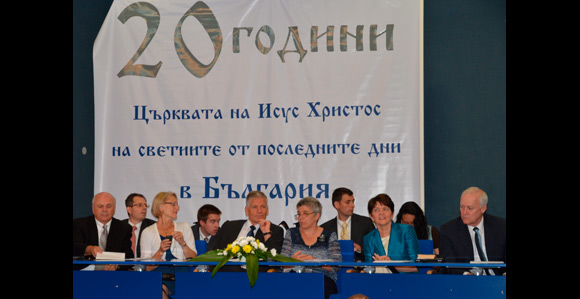 Former and current Church leaders assemble prior to the opening events celebrating 20 years since the official establishment of the Church in Bulgaria.

This year marks 20 years since the official establishment of The Church of Jesus Christ of Latter-day Saints in three Eastern European countries—Bulgaria, Russia, and Ukraine.

Although the Church already had a presence in each country, the governments of Bulgaria, Russia, and Ukraine didn’t officially recognize the Church until 1991.

In October 1988, Elder Russell M. Nelson of the Quorum of the Twelve Apostles and Elder Hans B. Ringger of the Seventy visited Bulgarian leaders hoping for an opportunity to become established there. But at that time, government policies did not allow the establishment of new religious groups.

Following the change of political regime, the Bulgaria Sofia Mission was created on July 1, 1991, and nine days later, the Church was formally recognized by the Bulgarian government.

Since then, rapid growth of Church membership has given rise to 13 congregations and more than 2,000 members throughout the country.

On August 12, 2011, members of the Church in Bulgaria and former and current missionaries gathered in Plovdiv, Bulgaria, for a fireside to celebrate the 20-year anniversary. The following day started with a press conference attended by local leaders.

“The Saints in Bulgaria are responding to the light of truth and are embracing the gospel,” said former mission president (2006–2009) Blair Bennett of Canada, who attended with his wife, Mary Jane. “The hand of the Lord is directing the growth of the Church and preparing choice souls for the joys that the gospel brings.”

Following the press conference, more than 500 members and missionaries gathered for a cultural and musical program.

Addressing those in attendance, Elder Larry R. Lawrence, First Counselor in the Europe East Area Presidency, emphasized that everyone should realize his or her important role in establishing the Lord’s Church on earth.

Later, members met at a local meetinghouse to bear their testimonies and express thanks for their membership in the Church. Upon departure, each member received a copy of the new collection of members’ testimonies, prepared especially for the celebration.

National public affairs director for the Church in Bulgaria, Rositsa Krupeva, said of the anniversary events, “Everyone left for home inspired and elated by the Holy Ghost, with strengthened testimonies and joy in their hearts, carrying to their families like burning candles the unforgettable memories of the celebration.”

Although the Church has been present in Russia for more than a century, it was not until May 1991 that Russia’s Ministry of Justice first recognized the Church as a centralized religious organization. The first family to join the Church in Russia was baptized in 1903 in St. Petersburg.

Just one month later, the world-renowned Mormon Tabernacle Choir performed in the Bolshoi Theater in Moscow and in Leningrad (now St. Petersburg). At that time, the Church in Russia consisted of a few branches in St. Petersburg, Vyborg, and Moscow.

Now the Church in Russia is beginning to flourish. Russia currently has eight missions, 21,023 members, and 116 congregations. Earlier this year, Elder Russell M. Nelson of Quorum of the Twelve Apostles created the first stake in Russia.

To celebrate the 20th anniversary, members held special open houses during the spring and summer in different missions throughout the country, according to Andrey Filimonov, associate director of public affairs.

“The Kyiv Community of the Church of Jesus Christ of Latter-day Saints,” was registered at midnight on September 9, 1991, following a year of missionary service.

Three days later, on September 12, Elder Boyd K. Packer and Elder Dallin H. Oaks of the Quorum of the Twelve Apostles, accompanied by Elder Dennis B. Neuenschwander of the Seventy, visited Ukraine and offered a blessing over the land.

Just one year earlier, on October 7, 1990, the first missionaries had arrived in Kyiv. By June the next year 44 members comprised the Kyiv Branch.

This year, in celebration of two decades of the Church in Ukraine, units throughout the country organized service projects during the months of April and October.