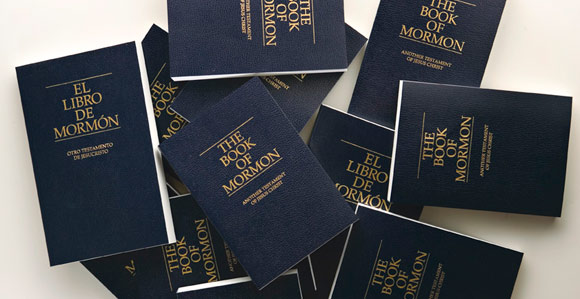 With the 181st anniversary of the publication of the Book of Mormon in March came another milestone—the distribution of its 150 millionth copy.

“Through all of these years critics have tried to explain it. They have spoken against it. They have ridiculed it. But it has outlived them all, and its influence today is greater than at any time in its history.” — President Gordon B. Hinckley (1910–2008), 15th President of the Church

With the 181st anniversary of the publication of the Book of Mormon in March came another milestone—the distribution of its 150 millionth copy.

The first copies of the Book of Mormon appeared on the shelves of E. B. Grandin’s bookstore in Palmyra, New York, USA, on March 26, 1830. The initial printing totaled 5,000 copies. Over the next 150  years, more than 39 million copies were printed.

By 1990 the 50 millionth copy had been printed for distribution by members and missionaries. That number doubled by 2000, with the Church printing an average of one copy every seven seconds over the next decade—a rate the Church has sustained to reach the projected 150 million by 2011. The majority of the printing is done in Salt Lake City, Utah, USA, but presses in Brazil, Germany, Japan, Korea, and Taiwan are also used.

One of the many reasons President Benson gave for filling the earth with the Book of Mormon was its influence. The Prophet Joseph Smith taught early Church leaders that “a man would get nearer to God by abiding by its precepts, than by any other book.”

Since that time the book’s influence has been recognized by many. In 2003 Book magazine named the Book of Mormon one of the “20 Books That Changed America,” ranking it with such titles as Thomas Paine’s Common Sense and John Steinbeck’s The Grapes of Wrath.

In August 2005 President Gordon B. Hinckley (1910–2008) made this promise to members who read the Book of Mormon: “There will come into your lives and into your homes an added measure of the Spirit of the Lord, a strengthened resolution to walk in obedience to His commandments, and a stronger testimony of the living reality of the Son of God.”

In October 2007 he said of the book: “Through all of these years critics have tried to explain it. They have spoken against it. They have ridiculed it. But it has outlived them all, and its influence today is greater than at any time in its history.”

The Work of Translation

That influence is due in part to the number of languages in which the book is flooding the earth.

The Book of Mormon has been published in its entirety in 82 languages, with selections of the book available in an additional 25 languages. The first edition of the Book of Mormon after English was Danish in 1851, followed by French, Italian, Welsh, and German in 1852.

Additional languages are currently being produced. Translations completed in 2010 include Indonesian and Thai. In addition, the Japanese translation of the scriptures recently became available online.

Mojca Zeleznikar joined the Church before the Book of Mormon was available in her native language of Slovenian. Her testimony of the truthfulness of the gospel came by listening to the missionaries and studying the Book of Mormon in Croatian and English.

In 2002, a few years after Sister Zeleznikar was baptized, the Book of Mormon was translated into Slovenian. When she read the translated text, she felt the full power of the words. “I felt the truth expand before me in clear simplicity and profound purity,” she recalled. “The voice of my Creator [spoke] to me in my own language—the language that my mother spoke to me.”

In addition to the increasing number of translations available, the Church is also making use of advancing technologies to flood the earth with the Book of Mormon in different formats.

President Benson said, “In this age of electronic media and mass distribution of the printed word, God will hold us accountable if we do not now move the Book of Mormon in a monumental way.”

Audio recordings of the Book of Mormon in English, Japanese, Korean, Portuguese, and Spanish are available at audio.ChurchofJesusChrist.org, with other languages to come. The electronic text of the Book of Mormon is available in 21 languages at scriptures.ChurchofJesusChrist.org; more than 740,000 people use the online edition of the scriptures each month.

The entire standard works and study helps can also be found in multiple languages at scriptures.ChurchofJesusChrist.org. Online sharing capabilities and study tools like the My Study Notebook have also added to the scriptures’ online presence.

Also in 2010, the Church produced official scripture applications for mobile devices in English, with other languages to follow.

And in October this year, the Ensign and Liahona magazines will publish a special issue focusing on the Book of Mormon.

However, with billions of people yet to reach, the urgency President Benson felt to publish and distribute the book in 1988 remains today.

“We have the Book of Mormon,” he said during October conference that year. “We have the members, we have the missionaries, and the world has the need. The time is now!”

President Thomas S. Monson, 16th president of the Church, has emphasized the book’s importance as well: “The Lord brought forth the Book of Mormon at a period of time [that] would enhance its distribution far and wide,” he said. “It is my personal testimony that the Book of Mormon changes human lives. It is indeed another testament of Jesus Christ.”