Bishop Caussé Speaks at U.N. Civil Society Conference about the Necessity of Sacrificing for a Better World 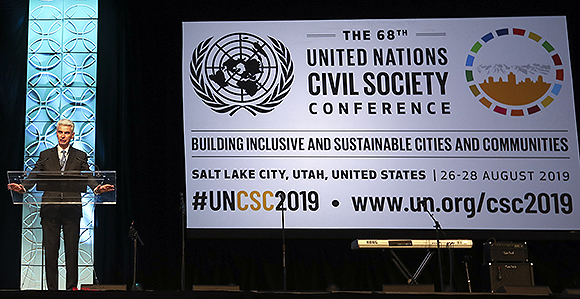 “The teachings of Jesus Christ—loving one’s neighbor; caring for those in need—cannot help but inspire volunteerism; they cannot help but mobilize citizens to sustain one another and to include one another.” —Bishop Gérald Caussé, Presiding Bishop

Sacrifice is also required to “sustain and include those around us, whoever they may be,” he said.

As one of several speakers at the closing session of the three-day conference held at the Salt Palace Convention Center, Bishop Caussé spoke on behalf of The Church of Jesus Christ of Latter-day Saints, one of the conference sponsors and accredited partners with the U.N.

Highlighting the conference theme of creating inclusive and sustainable cities and communities, Bishop Caussé said he has seen the need around the world for communities that truly do sustain one another and include those who are seen as different or those who may be vulnerable.

“With my call to full-time service for The Church of Jesus Christ of Latter-day Saints, I’ve come to witness firsthand the personal efforts of members of my faith, and of many others around the world, to reach out to those in need,” he said.

Many times, Bishop Caussé said, he has seen people sacrifice to serve others.

“When tragedy strikes, they drop what they’re doing and give up their weekends to assist in disaster-relief efforts,” he said, noting that witnessing tens of thousands of volunteers assisting in the aftermath of hurricanes Harvey, Irma, and Maria is just one such example he will never forget.

During the closing plenary session, Maher Nassar, the director of the outreach division for the United Nations Department of Public Information, announced that in addition to being the first time the conference was held in the United States outside of U.N. headquarters in New York, it also officially surpassed all 67 previous such events to become the largest civil society conference in the U.N.’s history.

Much of the conference’s growth and success was made possible by the important partnerships bringing the conference to Utah, Nassar said, thanking key partners like the Church, Utah Valley University, and Salt Lake City mayor Jackie Biskupski.

“In the spirit of partnership, . . . we have been warmly welcomed in Salt Lake City and Utah by so many stakeholders in this community,” he said.

Another component of the success of the conference came from work and contributions of hundreds of youth who have been involved every step of the way, he added.

Speaking to the youth in attendance at the conference, Bishop Caussé asked them to “show us the way; carry the baton; maintain the flame; channel your enthusiasm; find ways to serve in your neighborhoods, in your communities, cities, countries, and congregations. Serve at home and abroad.”

By doing so, all will experience the blessings of service, community, and partnership, he said.

Highlighting the three-day service project that took place as part of the conference, Bishop Caussé said the selfless spirit of service allows both the giver and the receiver to be lifted together.

Sponsored by American Airlines, Feeding Children Everywhere, Latter-day Saint Charities, and JustServe.org, the project brought together more than 4,000 volunteers to assemble over 501,380 meals for children throughout the U.S. That number far exceeded the goal of 375,000 meals, and the number of volunteers was close to the number of overall conference attendees.

Such a turnout was truly astounding, he noted, and serves as a clear example of the power that comes from partnering to care for one’s neighbors and communities.

Seeing so many people from differing organizations and nations coming together in unity to make the world a better place for all mankind was heartening, Bishop Caussé said.

“In our faith tradition, the teachings of Jesus Christ—loving one’s neighbor; caring for those in need—cannot help but inspire volunteerism; they cannot help but mobilize citizens to sustain one another and to include one another,” he said. “Members of The Church of Jesus Christ of Latter-day Saints believe givers and receivers are both alike in the eyes of God; they share the same divine origin and eternal potential.”

With that understanding, the Church and its members seek to engage in the work of creating a better world, he said—a world in which people are willing to make the necessary sacrifices to reach across barriers and boundaries to “include, sustain, serve, and, most importantly, love one another.” 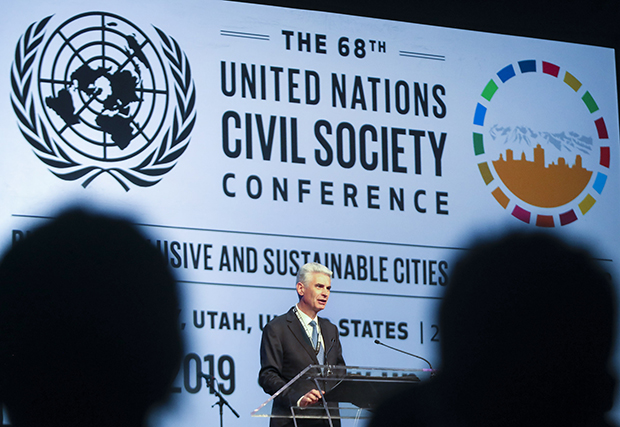