Behind the Scenes on the Jerusalem Movie Set: Actors Bring Experience, Take Away New Perspectives

At 4 feet, 10 inches (1.5 m) tall, 94-year-old Stella McComas may not stand out at first glance. However, on the Jerusalem Movie Set, newly built by The Church of Jesus Christ of Latter-day Saints, Stella, wrapped in a ragged shawl with dust-like makeup on her face, shines as she acts the main part in the biblical parable of the widow’s mite.

A Kaysville, Utah, USA, resident of Ukrainian descent, Stella said the fact that she can identify with the woman she is portraying helps a lot when it comes to acting on-camera.

“You have to imagine that you are that character, and it’s easy when you kind of are,” she said. “You’re a widow. You’re in your nineties. And you just have the part.”

Stella’s daughter, Carole Taylor, took her to auditions, thinking she would be perfect for the part of Anna the prophetess: “When I took her into the room, the one casting director looked at her and said, ‘Oh … wow.’ She has that countenance. … She puts herself right into the role, and she’s had so many experiences in 94 years that she can.”

Over the past two months, hundreds of actors from around the world—chosen in large part for their Mediterranean looks—have traveled to the set, located in Goshen, Utah, USA, to play parts ranging from Jesus Christ to a widow, and from Pharisees to beggars. 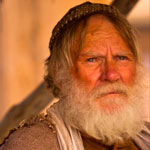 These actors’ efforts, in combination with those of cameramen, directors, producers, makeup artists, lighting technicians, and many others, have resulted in 47 different stories or vignettes from the life of Christ, taken directly from the King James Version of the Bible. These stories make up the New Testament Scripture Library Project.

A second phase of filming that would cover additional key New Testament scenes is being considered. If approved, filming would begin in spring of 2012. The first vignettes will probably be seen in December 2011, according to David Nielson, Media Services Department managing director.

These videos are no small matter. They will provide new material for the Church Educational System, Mormon Messages, missionary films, conference broadcasts, and more.

But according to the actors, what also matters is the parallels they find between their characters and themselves, and what makes a difference is what they take away after playing their part—whether that part is large or small.

Shiloh Potter is standing in a cramped room, hoping against hope that her “daughter” is not dead. When her “husband” enters, she looks up expectantly.

As Shiloh continues to portray her character, Jairus’s wife, the actor who plays Christ enters and blesses her “daughter,” who then sits up.

Although Shiloh doesn’t have daughters of her own, she said knowing that she would one day helped her play her part.

“I knew I needed to tap into my eternal family when I went into that scene,” she said. “And let’s be honest, tragedy and heartbreak and the utmost devastation you can think of is universal. It doesn’t matter what period it happened in and what’s going on in your life. It feels the same, and everyone can relate to that.”

From South Jordan, Utah, USA, Shane Mozaffair is the actor portraying Jairus, Shiloh’s “husband.” A father with daughters of his own, he found it easy to empathize with his character.

“[It is familiar] to be a father needing help and not being sufficient in your own capabilities to fix it, to make it right,” he said. “You take that [experience] and you translate it into the Christ figure blessing you and your family. It’s a feeling and a sense of gratitude that you can’t repay.”

Fourteen-year-old Ali Fischer, who plays Jairus’s daughter, said she just tried to imagine how she would react in the same situation. “When she wakes up she’s thinking, ‘What is going on?’” Ali said. “And then when I see the Savior, I thought, ‘If I was actually seeing the Savior right there, no matter how confused I was I would probably have an overwhelming sense of peace and calm.’ … And then as they’re leaving, I would be pondering and taking in all that just happened in those 30 seconds.”

The actor who plays the Apostle Bartholomew, Adi Marriott, said that finding commonalities between himself and Bartholomew helped him get into character. Raised in Israel, Brother Marriott, like Bartholomew, was brought up in the Jewish faith. At age 16, he joined the Church.

He is familiar with Jerusalem from annual trips he took to the city with his family as a youth.

“I haven’t felt like that for the past 15 years, till I walked on set,” he said. “It was an amazing thing to be able to find a little glimpse of my childhood again.”

Charley Boon, playing the part of Philip the Apostle, agreed that the set made getting into character more realistic.

“When we first stepped on set in our costumes, walking around as the Quorum of the Twelve and being with the Savior—John Foss is playing Jesus—it wasn’t like acting,” he said. “Immediately we were translated into another world, another time.”

He said it also helped that the cast members portraying the Twelve Apostles worked to form a feeling of brotherhood among themselves off-stage as well as on-stage.

What Acting Brings to the Actors

Both Sister Fischer and Brother Mozaffari said that in addition to the similarities they drew between themselves and their characters, they took away important lessons from their experiences as actors on the Jerusalem Movie Set.

The scriptures can sometimes feel like they’re in a foreign language, Ali said, but once she began studying them more closely, they made more sense. “They have such great messages that we all can learn from,” she said. “I have a greater appreciation and understanding of the scriptures and for Christ and His work.”

Brother Mozaffari also appreciates the stories in the scriptures more now, he said.

“The circumstances and the situation [may have changed], but we all are part of an eternal family and we still feel loss, and regret, and hope, so it just makes me appreciate what I have,” he said.

For Brother Boon, the experience helped him build a stronger testimony of the Savior. “Things I’ve read a hundred times in the scriptures I’m now understanding at a deeper level,” he said. “Everything that was done was done for a divine purpose. The Savior at any time could have prevented it, but He gave Himself for us. I hope that both believers and nonbelievers, as they watch this film, can just for a moment go back to what that must have felt like and been like for the people experiencing it.”

To be a part of the New Testament movie project, Sheldon Strand made the 600-mile (965 km) drive from his hometown of La Grande, Oregon, USA—twice.

“I have meager talents, but I thought I should make them available for the Lord’s work,” he said of his work filling the much-needed role of background actor. He summed up what each person involved in the videos—whether their part was large or small—should have brought away.

“I don’t know if any of the scenes that I’m in will be long enough for me to be seen, but that’s not really what’s important,” he said. “What’s important is to give what we can. They’re going to do the widow’s mite this afternoon, and in some small way, I guess we who are what they politely call background players have given the widow’s mite, because we came with no hope or expectation of any reward except what we carry away with us, and it will affect me for a long, long time—hopefully forever.”