Behind the Scenes at General Conference 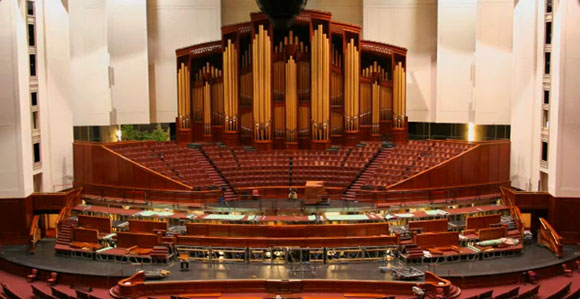 Twice a year, hundreds of people around the world combine efforts to put on general conference.

“There is planning so this experience is not one that detracts from the spirit of conference. . . . We’re trying to make it something that will touch people’s hearts and bring them to Christ.” —Thomas Smith, safety manager for the Church Media Services Department.

The seating is in position, the flowers are arranged, the lighting is designed, the music is chosen, the attendees are present … but no curtain rises, and conference begins.

An extraordinary amount of work requiring the coordination of many Church departments and hundreds of people around the world goes into preparing for general conference. The five sessions of conference draw a total of about 100,000 people to the Conference Center every six months and are broadcast to millions more around the world.

“I think the overall level of preparation lends itself to the importance of conference,” said Thomas Smith, safety manager for the Church Media Services Department. “There is planning so this experience is not one that detracts from the spirit of conference. . . . We’re trying to make it something that will touch people’s hearts and bring them to Christ.”

Two to three weeks prior to conference, about 10 people from the Church Physical Facilities Department begin assembling the rostrum where Church leaders and speakers sit. The rostrum is made up of several 10,000-pound (3,732-kg) sections and covers enough area that the Tabernacle on Temple Square could sit on it.

According to staging lead Steven Wall, workers use an “air-hockey concept,” in which they inflate air bladders along each piece to float them about 1/2 inch (13 mm) off the ground. Workers then glide each piece into place.

Using a combination of fresh and silk greenery and flowers, floral designers try to create a different look for each conference.

“We tend to do more of a natural-looking, garden-style arrangement,” said Karalyn Bliss of Floral Services. “It provides something of interest to the eye with movement and color.” 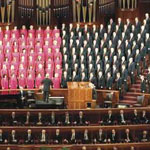 The Media Services Department is responsible for transmitting general conference to members around the world. Putting conference on the air requires approximately 105 full-time and on-call employees, who coordinate teleprompting, sound control, lighting, filming, directing, recording, satellite broadcasting, and more. From the director’s booth, the conference director directs the shots for each live camera in the Conference Center.

In the camera booth, operators run the controls for the seven robotic cameras placed in the auditorium. Other cameras in the hall and outside are controlled by operators at those locations. As soon as one conference session ends, Media Services personnel begin filming and editing scenes from the Conference Center and Temple Square grounds to be shown before the next session.

People in the light booth control the auditorium’s 6,000 lights, ranging from spotlights to colored lights. Conference utilizes 1,200 light fixtures, each controlled electronically through a type of oversized keyboard, by which a lighting designer can dim them or turn them up.

“Five or six full-time employees help with the set design for lighting,” Brother Smith said. “They make sure it’s conducive to a spiritual event versus a theatrical event.”

Watch the behind the scenes action as general conference comes together.

In the prompter booth, personnel obtain scripts and talks ahead of time and project them onto the teleprompter at the stand during the talks.

Several people work in the satellite room to broadcast conference live to areas around the world. Video broadcasts of conference sessions are also distributed over the Internet and on videocassette and DVD.

“With the advances in technology, we’re able to get conference out to people all over the world on the Internet essentially immediately,” Brother Smith said. “The advances have made the distribution of conference almost a miracle.”

In the sound booth, Media Services mixes the live audio from the pulpit and the choir, controlling sound levels in the auditorium, at overflow sites, and for the satellite feed.

Taking into account factors like carpeting, cushioned seats, and material on walls and ceilings, as well as the sheer size of the auditorium, sound engineers calculated to place loudspeakers precisely to avoid sound lag and to deliver the same sound to listeners wherever they might be in the auditorium.

A sound system developed especially for the conference center helps create the concert-hall acoustics necessary for the musical portions of programs.

Each conference, approximately 800 people, many of them volunteers, work before and during general conference to deliver the interpretation live to millions of listeners around the world. Church translators will interpret this conference in 92 languages.

“There’s a storm that happens before the calm,” said Brad Lindsay, manager of interpretation services for the Church, referring to the months leading up to the general conference broadcast.

In each of the Conference Center’s 58 translation booths, interpreters see and hear the broadcast as they interpret. Two people manage each session while evaluators monitor translation quality from outside the booth.

Of the 92 languages total, 44 are interpreted in the Conference Center and broadcast via satellite.

Thirty languages are interpreted in-country and transmitted back to the Conference Center, where the audio is combined with video and broadcast via satellite with only a few seconds’ delay.

Eleven languages are interpreted on location around the world and heard locally without transmission through the Conference Center.

Seven languages are interpreted in the Conference Center and later distributed on DVD.

After a session of 21,000 people leaves the Conference Center, Church custodians have only 30 minutes to clean the auditorium before the next 21,000 enter. Custodial tasks include cleaning bathrooms, vacuuming, and clearing away litter. Priesthood holders from local stakes are invited to stay after the priesthood session to help clean in preparation for the Music and the Spoken Word broadcast the next morning.

With 21,200 seats, the Conference Center is considered to be the largest theater auditorium in the world; the next nearest holds only about half as many people. But the months of careful planning and preparation create an unmistakable atmosphere of a house of worship as more than 100,000 Saints gather in the Conference Center twice a year to hear the counsel of living prophets and sing the hymns of Zion.

“Our goal is to be totally transparent,” said Russ Crabb, a producer for general conference. “We want to come away from conference with a message that’s clean and clear to everyone who’s listening or watching, and we want to support the First Presidency and Church leaders at a level that does that.”