Behind the Photo: President Nelson and the Faith of a Child 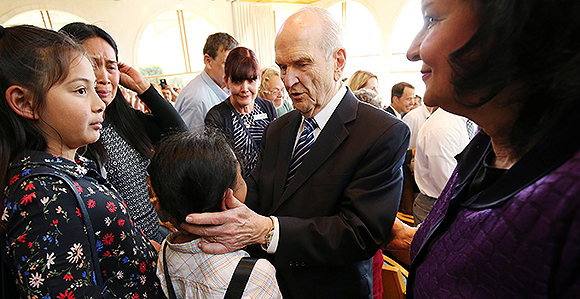 Sitting on large rocks in the shade of the BYU Jerusalem Center, John Rey and Mara Bautista of Tel Aviv watch their daughter Ella, 7, play nearby.

Times here have been tough for the family. Mara hasn’t worked since Ella was born. Her legal status—as well as Ella’s—in the country is uncertain.

But today they are not worried about that. They talk of the opportunity to hear President Russell M. Nelson speak as part of his world ministry tour.

As Ella runs over to her parents, she also makes a declaration about the prophet’s visit. “He is going to greet me,” she says with certainty.

Less than an hour later, Ella and her parents joined other members of the Church’s Jerusalem District for a meeting with President Nelson and Elder Jeffrey R. Holland of the Quorum of the Twelve Apostles.

“I suspect none of us in this room can understand the significance of this day. ... But we will,” said Elder Holland.

At the conclusion of the meeting, President Nelson walked up the steps in the center’s auditorium, shaking hands with members.

Then he saw Ella. President Nelson bent down, tenderly placed both hands on the back of Ella’s head, and looked at the child in the eyes.

“We will never forget this moment and this day,” said John Rey.