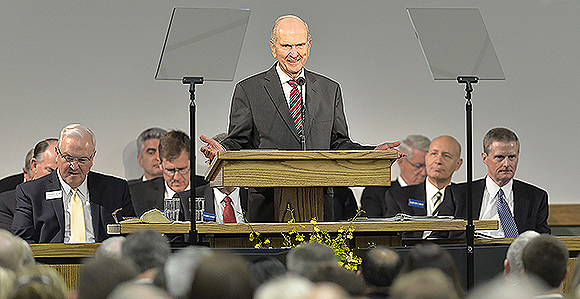 Elder Russell M. Nelson, Chairman of the Missionary Executive Council, tells mission presidents and their wives that missionary work should begin with the glorious end in mind of eternal life and immortality.

“Missionary work should begin and end with our minds focused on the blessings of the holy temple,” Elder Russell M. Nelson of the Quorum of the Twelve Apostles said in an address he titled “Begin with the End in Mind.”

“Missionary work is all about gathering people out of the world, ennobling them, and enabling them eventually to dwell with God forever,” said Elder Nelson, Chairman of the Missionary Executive Council. “This is His divine desire. Simply summarized, God wants His children to return home to Him. What else would you expect from a loving Father?“

“Missionaries have a solemn responsibility to act on God’s fondest hope—that His children will return home to Him. If we will help Him, He will help us.”

Elder Nelson referred to the missionary purpose, which is “to invite others to come unto Christ by helping them receive the restored gospel through faith in Jesus Christ and His Atonement, repentance, baptism, receiving the gift of the Holy Ghost, and enduring to the end.”

He said that Heavenly Father’s purpose “undergirds everything we do in this Church.” He quoted Moses 1:39: “For behold, this is my work and my glory—to bring to pass the immortality and eternal life of man.”

“These two objectives—immortality and eternal life—are both enabled by the Atonement of His Beloved Son, Jesus Christ. Through the Atonement, immortality (or resurrection), comes to all who will ever live. It is a free gift—an unconditional gift.“

Elder Nelson said, “Missionary labors should begin with this glorious end in mind.”

He said that, as a cardiac surgeon, he was invited to be a visiting professor of surgery in the People’s Republic of China 34 years ago. Upon meeting his host, Dr. Zhang, he thought how good he would look in white baptismal clothing. When he met Dr. Zhang's wife, he thought how good they would look in white temple clothing, but he realized that those thoughts were improbable in a communist country.

When Dr. Zhang and his wife moved to Toronto and he expressed a desire to learn more about the Church, Elder Nelson gave contact information to Canada Toronto Mission President Sidney A. Smith. A few weeks later President Smith told Elder Nelson his friends were ready to be baptized. Elder Nelson participated at the baptismal service. A year later, he performed their sealing in the Toronto Ontario Temple. “They really did look good in their white baptismal and temple clothing,” Elder Nelson said.

“Begin with the end in mind. Help your missionaries envision how good their contacts would look in white baptismal clothing and how very good they would look dressed in white temple clothing.

He used an analogy to explain the important qualities of leadership, stewardship, and the power of partnership: A heart surgeon does not perform an operation alone but works with an assistant, an anesthesiologist, nurses, and others. Each member of the team plays a vital role in safeguarding the life of the patient. ”A successful operation is followed by a period of intensive care; later, when the patient’s condition is stable, he or she is transferred to constant hospital care and then is ultimately released to the tender care of loved ones at home. A successful outcome depends upon good communication, cooperation, and commitment by each member of the team at all levels. If a complication should ensue, immediate steps are taken to rescue the patient, and nobody quibbles about whose job it is to save the patient’s life.

“Likewise, a successful outcome with either a new or returning member reflects complete cooperation among the bishop, ward council, ward missionary leader, and full-time missionaries. They work as partners. They sense their combined responsibility to care for the spiritual life of each precious son or daughter of God.”

Elder Nelson said, “In order to accomplish this team effort more effectively … and as directed by the First Presidency and the Quorum of the Twelve Apostles, we announce four adjustments to the teaching process, designed to offer more help for our new members.

1. Missionaries will teach “Lesson 5: Laws and Ordinances” in chapter 3 of Preach My Gospel both before and after baptism. Formerly, the lesson was taught only after baptism.

2. Mission presidents will actively teach and reteach the Lord’s standard for baptism, as recorded in Doctrine and Covenants, section 20, verse 37. “Two phrases are particularly important in preparing the investigator for the covenant of baptism: ‘having a determination to serve him to the end, and truly manifest by their works that they have received of the Spirit of Christ unto the remission of their sins.’ …

3. “When possible, missionaries will work closely with each new member for at least three to four months after baptism and continue to keep close to them for at least a year and hopefully for many years and even generations. …

4. “Missionaries will take the lead in reteaching all five of the lessons in Preach My Gospel after baptism.

“Missionaries will look to their ward mission leader as their personal partner so that a friend in the ward may be identified to help teach the lessons. The missionaries should be the active force in scheduling and teaching the lessons, helping each new member to make and keep sacred covenants.”

Of true partnership, Elder Nelson said, ”More can be accomplished by partners than could be done by each acting alone. With true partners, one plus one is more than two. … As partners, missionaries and members can grow a ward and build up the Church.”

Elder Nelson said, “Every missionary can have at least one convert on a mission: himself! Or herself! Not just a baptism, not just an attender, not just a name to be remembered—but a rock-solid, true-blue, through-and-through disciple who will be an exemplary member and spouse, long after the mission is over. We want your missionaries to develop faith so steadfast that their grandchildren will qualify for the blessings of the temple. …