Become “a People of Peace and Reconciliation,” Elder Uchtdorf Says during Volkstrauertag Event

“Candy Bomber” Gail Halvorsen, Elder Dieter F. Uchtdorf of the Quorum of the Twelve Apostles, Sister Harriet Uchtdorf, and James Burton, honorary consul to Germany, pose for a photo in front of the memorial to German soldiers who died in Utah. The Volkstrauertag commemoration event was held in Fort Douglas Military Cemetery on Sunday, November 17, 2019. Photo by Antje Uchtdorf Evans.

“It takes empathy and action to influence the future of mankind based on dignity, honesty, and eternal values, regardless of differences in politics, religion, race, or cultural traditions.” —Elder Dieter F. Uchtdorf

It was a little over 30 years ago when an event occurred that Elder Dieter F. Uchtdorf never thought he would see in his lifetime.

The Berlin Wall was “a symbol of suppression and political warfare,” Elder Uchtdorf said. While this representation of the Iron Curtain in Europe was still standing, he—being an optimistic man—remarked that it would one day come down, “but not in our lifetime. It will come down in the lifetime of our children or our grandchildren, but it will come down.”

He was serving as a stake president when “the impossible became reality.” On November 9, 1989, the Berlin Wall was opened and soon torn down to reunite East and West Berlin and East and West Germany.

The 30th anniversary of the fall of the Berlin Wall gave Volkstrauertag, a German national day of remembrance and mourning, a greater weight of significance as it was commemorated at the Fort Douglas Military Cemetery in Salt Lake City on Sunday morning, November 17.

Elder Uchtdorf of the Quorum of the Twelve Apostles was joined in speaking at the event by Stefan Schneider, consul general to Germany in Los Angeles, California, and James Burton, honorary consul to Germany in Salt Lake City. Current and former leaders of the United States Armed Forces were also in attendance.

While originally organized in 1948 to recognize those who died in war, the purpose of Volkstrauertag was expanded in 1952 to include any and all who have suffered and died due to oppression because of race, religion, or conviction. It’s held annually two Sundays before Advent begins in December.

For Elder Uchtdorf’s family, this day is not just one to mourn the dead. “Volkstrauertag reminded us regularly of the tragedy of war and the need to do everything in our own individual power to preserve and regain peace, or at least to clearly speak out for peace,” he said. 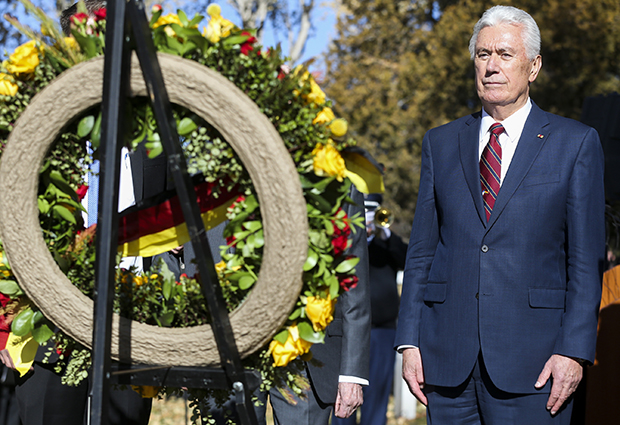 Elder Dieter F. Uchtdorf of the Quorum of the Twelve Apostles of The Church of Jesus Christ of Latter-day Saints participates in the ceremonial wreath laying during the Volkstrauertag ceremony at the Fort Douglas Military Cemetery in Salt Lake City on Sunday, November 17, 2019. Photo by Colter Peterson, Deseret News.

The fall of the Berlin Wall is just one example of a living testimony that reconciliation and peace are possible. “For me, this process is a living monument that enemies can become friends.”

When looking deeper, Elder Uchtdorf realized that trying to avoid wars and disaster is the message of the gospel of Jesus Christ as well as most religions. “We can and we should be a people of peace and reconciliation,” he said.

“It takes empathy and action to influence the future of mankind based on dignity, honesty, and eternal values, regardless of differences in politics, religion, race, or cultural traditions.”

It is not enough to express love only to those who have suffered in the past, Elder Uchtdorf said. “We need to include all who suffer now. This kind of commemorating and mourning will best express the pure love of Christ to all of our fellow men.”

Christlike compassion toward all people will help to positively change each person and the future of the world, Elder Uchtdorf said. Desire and action to help those who are sick, hungry, or in some kind of trouble will bring Christ’s peace to personal lives, communities, and the nations of the world.

“Therefore, every day you and I can and should have a day of mourning, reconciliation, even a day of new beginning.” 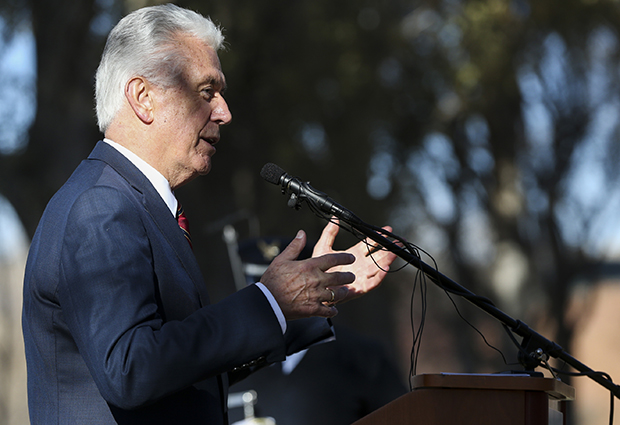 Elder Dieter F. Uchtdorf of the Quorum of the Twelve Apostles of The Church of Jesus Christ of Latter-day Saints speaks during the Volkstrauertag ceremony at the Fort Douglas Military Cemetery in Salt Lake City on Sunday, November 17, 2019. Photo by Colter Peterson, Deseret News.

In his remarks, Burton noted that there are two side-by-side lines of bricks in the street through Berlin. With few exceptions, these bricks serve as the only remaining reminder of the location of the Berlin Wall,” he said. “The subtle nature of these bricks—bricks that you may not even see if you weren’t looking for them—stand in stark contrast to the reality that was the Berlin Wall, which divided Germany for 28 years.”

“As we do so, as we allow these walls to be removed,” Burton said, “perhaps we will learn that that which we once allow to divide us can actually be a strength in uniting us, to bring us together.”

Burton invited attendees to wander around the cemetery following the event and visit the graves of some of the 41 German prisoners of war who are buried there as well as other Italian, Japanese, and American soldiers.

“As you do so, ponder on the ultimate sacrifice given by these men—really a lot of them just boys—in answering the call to arms for their respective countries,” he said. “As you do so, I hope the words of the Savior come to your mind when He taught that ‘greater love hath no man than this, that a man lay down his life for his friends’ (John 15:13).”

Schneider recounted the phone call where he learned that the Berlin Wall had fallen. Like Elder Uchtdorf, he didn’t believe that such a thing was possible. Then he received a call from a man inquiring about obtaining a visa for family who had come from East Berlin to West Berlin. 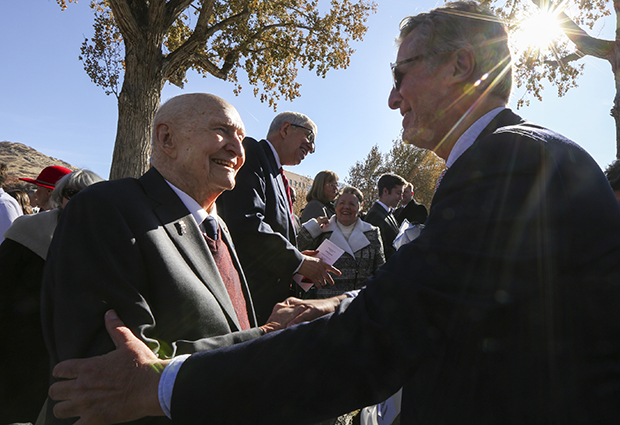 Stefan Schneider, consul general of the Federal Republic of Germany, shakes hands with Gail Halvorsen, left, who was a member of the Berlin airlift, following the Volkstrauertag ceremony at the Fort Douglas Military Cemetery in Salt Lake City on Sunday, November 17, 2019. Photo by Colter Peterson, Deseret News.

“I said, ‘Excuse me, sir. Don’t make fun.’” The idea of people coming from East Berlin to West Berlin sounded crazy to him. But over the course of the 45-minute phone call, which became a rather expensive one, this man shared the good news of the fall of the Berlin Wall and his excitement and happiness over it.

Schneider expressed his gratitude for all the United States had done to help Germany establish democracy and make it possible for him to be in America at this time.

“I’m just thrilled to be here,” he said. “I cannot believe I’m here talking to you. You don’t have that opportunity, as a person, to say thank you to so many people at the same time.”

Gail Halvorsen—also known as “Uncle Wiggly Wings” or the “Candy Bomber”—was also in attendance at the Volkstrauertag event. Halvorsen was a pilot during the Berlin Airlift and helped deliver food and candy to German citizens from 1948 to 1949. 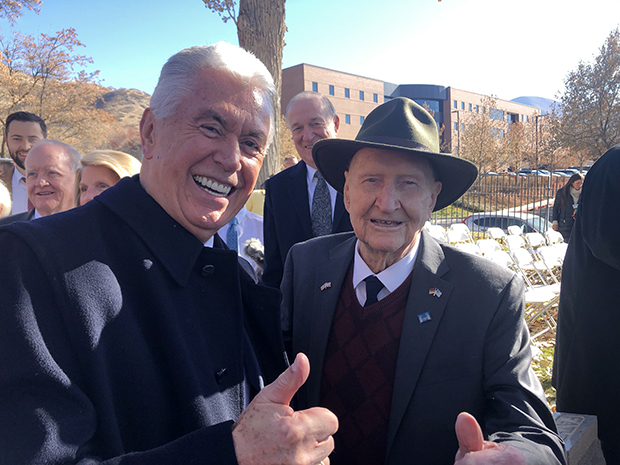 “My mom, the first chocolate she had was from a care package from the United States of America,” Schneider remarked.

Elder Uchtdorf’s first banana, he noted, was during the time of the Berlin Airlift. “I think it came with one of your flights,” he told Halvorsen.

Halvorsen was invited to join Elder Uchtdorf and Burton, along with Brigadier General Douglas Cherry and Adjutant General Michael J. Turley, in laying a ceremonial wreath at a monument to German prisoners of war who died in Utah.

Troop 596, from Kaysville, Utah, performed a flag ceremony, and the German Chorus Harmonie provided the music. More than 300 attended on this sunny Sunday morning. The Volkstrauertag event was hosted by Kirton McConkie, which the law firm has done annually since 1977.