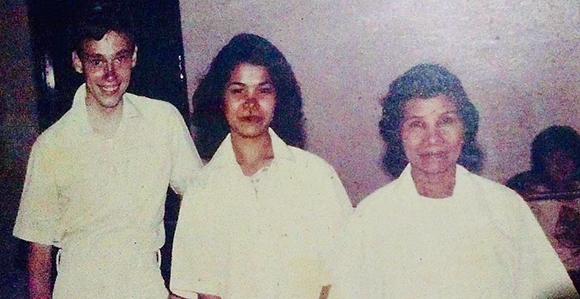 Cora Jardeleza, center, and her mother, Concepcion Jardeleza, are joined by Elder Keith Eager, left, at the Jardelezas’ baptism in Bacolod, Philippines, in 1980. Photo courtesy of Cora Ius.

“We suffered many heavy trials, but thanks to our unwavering faith and testimony of the gospel I can say that in spite of our trials, our blessings are countless.” —Cora Ius, Filipino Latter-day Saint

The announcement of new temples is always a joyous occasion, but hearing President Russell M. Nelson announce in October 2019 general conference that a temple would be built in Bacolod, Philippines, sent me into shock. Not only is it where my mom is from and where her family still lives, but it’s where she joined the Church and endured years of persecution for doing so.

To me, having a temple there is a symbol of the power and blessings of faith.

In 1980, my mom, Cora Jardeleza Ius, was a 20-year-old college student and was also working full time. The Jardeleza family had moved to the Bacolod area a decade earlier, after the death of my grandfather. Raising six children as a widow was nearly impossible for my grandmother, Concepcion Jardeleza, so they moved to be close to extended family. At the time the missionaries arrived, they were living in a home owned by an aunt and had several aunts and uncles as neighbors.

Once my mother finally agreed to listen to the missionaries, it took only two weeks for her to read The Book of Mormon and realize she couldn’t deny the truth. Although the family wanted to get baptized, they initially turned down the invitation because they realized it could mean ruin for their family.

“All those years, my mom’s two old-maid sisters and aunt were our biggest financial backers,” Mom explained. “They had a lot of say in how we had to live our lives because of their support.”

Getting baptized could mean ostracism from the family, but my mom and her family also knew that the Church was true. They decided to get baptized in secret.

Mom used to tell me she initially had a hard time understanding the faith of the early Saints. How could they endure so much for a religion? She didn’t realize that she and her family would also have to fight for their faith every day for the next several years after getting baptized.

Once the extended family found out, it started a chain of events. Almost immediately, the aunt who owned their home came by to lash out at my grandma.

According to my mom, my aunt said, “if we did not go back to our old religion, everything would be taken away from us.”

In some ways, it was. They were banned from all family gatherings. They were yelled at in public and in private. They were humiliated when turned away from the funeral of a beloved family member.

Perhaps the culmination of the persecution happened on none other than a Sunday afternoon, after coming home from Church.

“We found that half of our home was demolished. My aunt gave her brother—my uncle next door and his sons—permission to destroy our home. We were given an ultimatum to leave the house if we would not renounce our membership.”

Yet even the sight of a destroyed home and the loss of all their material belongings didn’t shake the family enough to turn away from what they knew was true.

“We decided to stand our ground and stay in a half-destroyed home until the end of the school year,” she told me.

My mom lost friends and family. They told her everything that was happening was simply punishment from God, but she knew better. The Church became her home and brought her so much joy, even amidst the afflictions and pain. She held on to the feeling of wholeness and peace that enveloped her after her baptism.

Despite the persecution, they were “feverish with faith.” They wanted to spread the gospel and help others see why they continued to stay. Within just three months, they had helped bring five other families to the Church. She wanted nothing more than to serve a mission of her own—but instead, she left the country to find work that would support my grandma and the missions of her younger sister and brother.

Today, that brother is a stake president, with every one of her sister’s five children having served full-time missions. And to this day, the Jardeleza family is known in the area for their fellowshipping and aid in growing the Church there.

It’s not hard for me to look at my mom’s life and see how, from that point on, she became one of Christ’s most dedicated servants. Her faith and love of the gospel is unshakable.

“We fought so hard to keep our testimonies,” Mom told me.

And now, seeing a temple being built in the place of simultaneous blessings and pain, provides for me a personal affirmation that it was all worth it.

“We believed that if we could stay strong, we could use it as a tool to convince them, maybe one day, that remaining faithful means more than just being a member,” she said. “It changes lives and brings tremendous blessings.”

Having the knowledge of all my own mother endured, and being a part of that legacy, is why I cried when I heard the announcement. It’s why my mom gasped out loud—sitting in the Conference Center and hearing the announcement in person—and was flooded with emotion.

The temple is the house of the Lord, a symbol of holiness and the importance of covenants. But the Bacolod temple will mean even more to me and my family. It is a reminder of the power of faith and the endurance of modern pioneers.

Mom’s story started 39 years ago, but her legacy and the influence of that one decision will affect lives for generations past and future. Stories similar to her own are in progress all around the world today, and the blessings of their faith are evident in the seemingly regular announcement of temples and the growth of the Church.

“We suffered many heavy trials,” my mom says while telling her story. “But thanks to our unwavering faith and testimony of the gospel, I can say that in spite of our trials, our blessings are countless.” 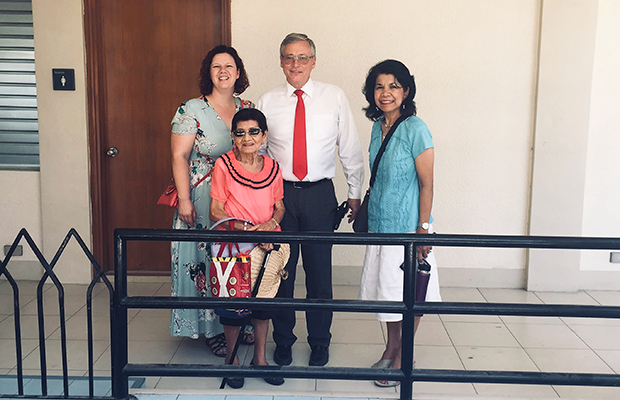 Standing near the font where they were baptized in Bacolod, Philippines, in 1980 are Cora Jardeleza Ius, right, and her mother, Concepcion Jardeleza, second from left, joined in this May 2019 photo by Keith Eager, second from right, and Michael Moore Reed, left. Photo courtesy of Cora Ius.